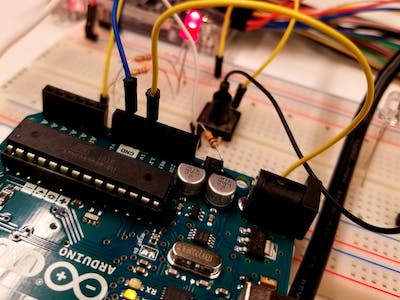 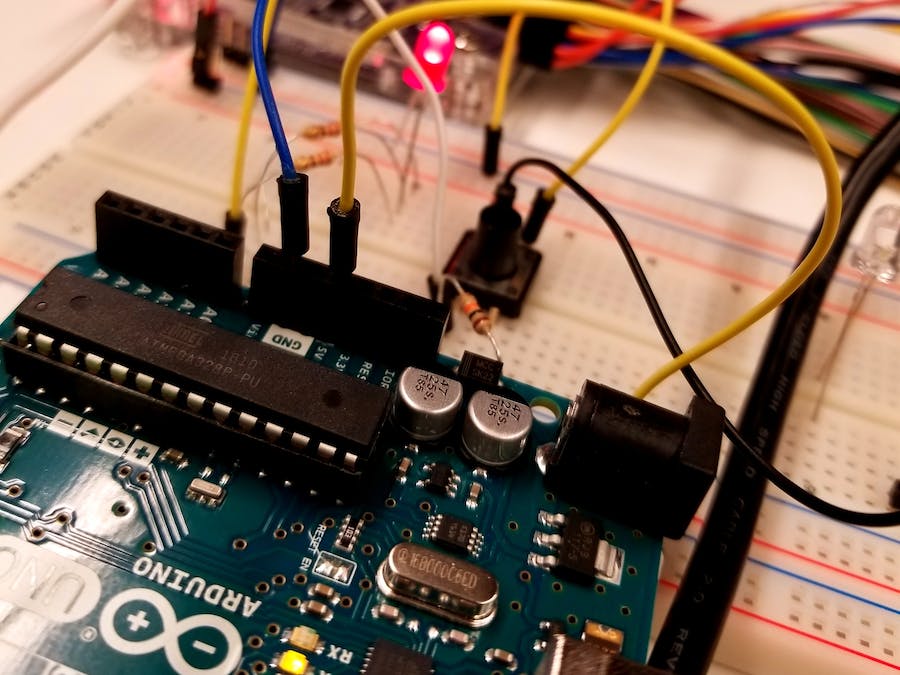 I am making an Arduino Uno project that requires a push-button to be used as a toggle. To check that my Arduino code could tell when a button was being pressed, I wired up an LED with a push-button. When I tested it, I noticed that the LED didn't always behave as expected. If I pressed the button once, sometimes it would toggle (turn on or turn off) several times.

I set one of the Arduino digital I/O pins as an input. Whenever the push-button is pressed, it sends a signal to that input pin. The code controls a digital output pin connected to a transistor, which supplies current to the LED. Every times the Arduino notices a signal from the button, it switches the output either on or off. So each click should result in the LED turning on or off. See the schematic and breadboard layouts below for how to implement this design.

After making certain that the circuit was properly designed, I knew this must be an issue with the button "bouncing". In a nutshell, bounce is when signals oscillate for a short period after a button press, and which causes the Arduino to see several button presses. In order to fix this, buttons need to be "debounced". For more details on this topic check out this projectI published about what bounce is and how to characterize it for a specific button or switch.

I took a slow motion video of this happening, so you can see the LED light up briefly before it turns back off:

The second case, where the LED doesn't seem to turn off, is visible in the image below.

A video of the LED seemingly not turning off:

To debounce my button, I instructed the Arduino to toggle the LED when it sees the signal go low, delay 1ms to wait out any noise following the initial press, and then to do nothing until the signal goes high. Once it does, another 1ms delay accounts for any noise when the button is released.

The two images above show the behavior of the system after I changed the code. As you can see, the Arduino waits until after the noise is gone before turning on or off the LED.

See the code section for the debounced button code, as well as what I started off with. Below are two videos, showing the difference debouncing can make.

The LED doesn't always toggle with the button.
Every press is followed by a single toggling of the LED, as desired.

Arduino code to perform a toggle operation when it sees a button press, with the added feature of ignoring switching noise.

Arduino code that was initially used to perform a toggle operation when there is a button press. The toggling is very unreliable because of signal noise. Used as an example of where the code started.

Extremely simple project, my first even. Four buttons. Three to choose RGB values, one to choose whether to subtract or to add.

Project showcase by Re

You can use the reset button of the Arduino Uno shield like a push button. The data stored at SRAM and will keep after reset.

Push a button to receive a message on Twitter for what to wear that day.

Project showcase by Arduino “having11” Guy

Three different way of connecting a push button with an Arduino microcontroller.

3 Different Ways of Connecting a Push Button to Arduino

This project will show you how to fade lights, add a button to it.