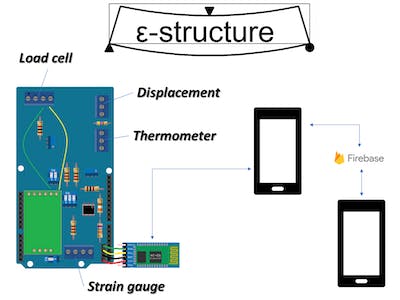 Experimental system for Structural Health Monitoring (SHM), based on the Arduino. 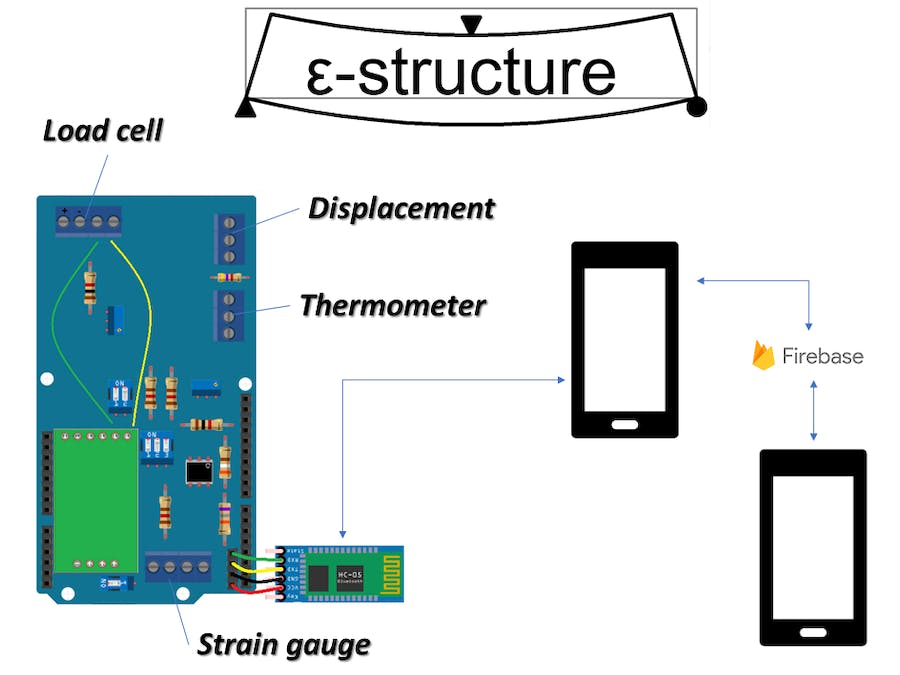 Experimental system for Structural Health Monitoring (SHM), based on the Arduino.

The ε-structure UNO (Figure 1, 2 and 3) presents itself as an experimental system proposal for Structural Health Monitoring (SHM), based on the Arduino platform®, for measurement of the following quantities: strain, displacement, force and temperature.

This system has a hardware that is compatible with the Arduino® board, model UNO R3, as well as software for mobile devices (smartphones and tablets) which those have been used in that use an Android® operating system developed through the MIT App Inventor platform.

This version is compatible with the following sensors / transducers:

The development of another version (previous to the ε-structure UNO) of this experimental system, occurred during a Master of Science research of the developer, with this fact, complementary information could be obtained by consulting the dissertation.

You can download the Basic Manual for Construction and Use of ε-structure UNO in the link www.e-structure.org Currently has a version in English and Portuguese.

Using ε-structure UNO system requires both the use of the hardware connected to Arduino® UNO and the compatible sensors, as well as the operation of the software, both described below. The hardware relevant components are also listed below, according to the numbering, in Figure 1:

1. Terminal for connection to the load cell;

2. Terminal for connection to the displacement transducer;

4. Terminal for connection to the temperature sensor;

8. Potentiometer for adjusting the readings of the strain gauge;

List of materials and components with detailed information can be obtained from the manual available for download at www.e-structure.org

This video describing the hardware of ε-structure UNO.

The ε-structure UNO system software was developed through the MIT App Inventor Beta 2 platform (http://ai2.appinventor.mit.edu or http://appinventor.mit.edu), which is available both in executable file (apk) from request to the author, as well as an editable file (aia) next to the MIT App Inventor Gallery (Figure 4). To have access to the Gallery, make avalid Gmail® account and it will be connected to your browser, preferably Google® Chrome.

To find the App code, it is necessary to accessat the following link: http://ai2.appinventor.mit.edu/?galleryId=5191132288516096 and watch the following video.

The user’s interface elements are detailed below, according to the numbers, in Figure 5.

1. The Connect (Conectado) and Disconnect (Disconectado) buttons allow you to interact with the Bluetooth® module, as well as to verify the status of the connection (connected or disconnected);

2. The Exit (Sair) button allows you to exit the Local Acquisition screen, ending the acquisition and saving the data to the device memory, if the Record (Gravar)(item 12 - Results) option is selected;

3. Select channels those which will be able to read how to use each CheckBox. Stop (Sair) Button closes data acquisition;

4. You can apply the Moving Average Filter first, by entering the average range (numeric value) and in sequence enabling this feature, by using the CheckBox.This Moving Average Filter feature is not available in "aia" files available in MIT App Inventor Gallery, because it depends on the installation of an external extension not supported by Gallery.

7. Thus, Channel 03, which is responsible for the Force readings. Lr are relative readings, and those are the values received inbytes and not yet converted into Force. In TextBox Nome, a name can be inserted for these Force readings. In TextBox F.Conh. necessarily, must be inserted the value of the known Force (numerical value with out unit of measurement) applied to the load cell at the appropriate time of the calibration and must be inserted by direct method. Finally, Força, as the final value of the force, in the same unit of measure of the Known Force applied in the calibration;

8. Then, Channel 04, is responsible for the Displacement readings. Lr are relative readings, which are the values received in bytes and not yet converted into Offset. In TextBox Nome a name can be inserted for these Displacement reads. In TextBox Curso, necessarily, must be inserted the value of the transducer travel course (i.e. the maximum value read by the transducer, for example 25 mm, inserted without an unit of measure) because this displacement must be manually applied to the transducer during the transducer process to calibration, by direct method. Finally, Deslocamento is the final value of the displacement, in the same unit of measure of the course applied in the calibration;

9. This is about how to refer, to bring up Calibration (Calibração) which can only be started after all the fields have been followed by the enabled channels which have been filled. Calibration is performed using the following buttons: after clicking Start (Iniciar), the user must manually apply and maintain the Known Force in the load cell (if Channel03 is enabled) and manually shift and maintain the maximum displacement transducer travel course (if Channel 04 is enabled) and click Apply (Aplicar). After this, the known force must be removed from the load cell and the travel course of the displacement transducer back to the initial position, before calibration. Once this is done, click Finish (Finalizar), and then click Zero (Zerar). Calibrationshould only be started (when dealing with channels 1 and / or 3) at least,after 3 (three) minutes of continuous operation of the HX711 module connectedto the power behind the Arduino, which it takes approximately the same time –at room temperature of 25 ° C - for heating and consequently stabilization ofthe readings !!!!!!!!!!

10. Besides visualizing and reading the magnitude (Resultados) of each channels, they can be stored in the device. To do this, you must first select the number of acquisitions stored per milliseconds (ms), by selecting one of the opitions, SelectBox Range(Intervalo). After that, select CheckBox Save (Gravar). In the end, readings of magnitudes can be exported in a Comma Separated Values (CSV) file, for use in spreadsheet software such as MS Excel®.In this case, clicking Export (Exportar) the system will ask for a name for the file, which is stored in the root of the device memory. Lastly, about Delete (Apagar) button that deletes the information stored on the device, which, atfirst, it will be not deleted from, even the information is coming from the software, it only will occur, if the Delete(Apagar) button is not activated;

11. Usingthe Remote (Remote) features, it allows the device to share in real-time via internet all the information which has been acquired by the system (Figure 6), for a second device (smartphone or tablet) that also, has the same application installed, by accessing "Remote Acquisition" (Aquisição Remota). The CheckBox Enable (Ativar) must be selected in both applications. This feature works only between files generated by the App Inventor Gallery as described in this text, since they have the same Firebase server configuration properties with App Inventor.

12. Using the acquisition readings Chart (Gráfico), can be used by selecting CheckBox Activate (Ativar). Using button Delete (Apagar) clears chart plots. The ratio of the reading points can be adjusted by thecursor of the Plot Scale (Escala de Plotagem) function and the Chart Size (Ajuste de Tela) can be changed by the cursor.

This video describing the software of ε-structure UNO.

The user interface elements of the "Remote Acquisition" (Aquisição Remota) screen are detailed below, according to the numbering contained in Figure 7:

1. CheckBox Enable (Ativar) must be selected and the device connected to the internet;

2. The Results (Resultados) received from the server can be stored on the device by selecting CheckBox Record (Gravar). At the end, readings of magnitudes can be exported in a Comma Separated Values (CSV) file, for using spreadsheet software, such as MS Excel®. In this case, clicking Export (Exportar) system, and it will ask a name for the file, which is stored in the root of the device memory. The button Exit (Sair) ends the connection and closes the screen;

3. In these four fields, the readings of the magnitudes of each channel are displayed, as well as, Time in the format "MM/dd/yyyy hh:mm:ss a" and the geographical coordinates (Latitude and Longitude) of the device located near ε-structureUNO’s hardware;

4. The button Find (Localizar) allows to place the pin on the map, at the location of geographic coordinates received from the server.

Using strain gauges in ε-structure UNO system, can be implemented with ¼ bridge, ½ bridge and full bridge connections, according to the examples of connections, in Figures 8 and 9, which also demonstrate the scheme of connection of the wires, also indicate the position of each keys, of the DIP switches to be used for each case.

The provisions of the strain gauges in ¼ bridge, ½ bridge and full bridge, as exemplified by connections from Figures 8 and 9, were tested in ε-structure UNO system, however, other arrangements and forms of strain gage connections can work in this system, although, it require careful tests to be performed, to verify how it works in this operation.

The adjustment (balance or adjust) of the trimpots (potentiometers) must be done when necessary, which must be performed before calibration and placing in positive values close to zero (reading in bytes of channels 1 and 3, corresponding to module HX711), which will still be in the thousands, means, it is can not effectively zero them.

A demonstrative video how to use ε-structure UNO with the usage of a strain gauge.

The system ε-structure UNO is compatible with displacement transducers of the potentiometers type. Their readings correspond to the Channel 04 of the application and the connection of the transducer with the hardware should be done as shown in Figure 10, including the layout of the + and - wires. Tests were performed using 1KΩ and 4.7KΩ transducers. Calibration is by the direct method as described earlier in the manual.

A demonstrative video how to use ε-structure UNO with the usage of a displacement transducer.

The load cell can be used via Channel 03, witht he wiring diagram of Figure 11. The load cells must be resistive type, to be compatible with the HX711 module. Calibration is by the direct method as it has been described earlier, in the manual.

A demonstrative video how to use ε-structure UNO with the usage of a load cell.

Temperature measurements are performed through Channel 2 and they do not require calibration, since the temperature sensor DS18B20 already provides the temperature value in degrees Celsius (degrees Celsius) and the software only converts to degrees Fahrenheit. It is connection takes place according to the arrangement shown in Figure 12, including thearrangement of the + and -.

A demonstrative video how to use ε-structure UNO with the usage of a temperature sensor DS-18B20.

The Basic Manual forConstruction and Use of ε-structureUNO, can be downloaded in the link www.e-structure.org currently has a version in English and Portuguese.

Your collaboration is very important, so if youfind something that needs to be revised or corrected in this text, please contact.

To use the ε-structure UNO, requires the inclusion of the libraries HX711, OneWire and DallasTemperature, which can be found on the internet. 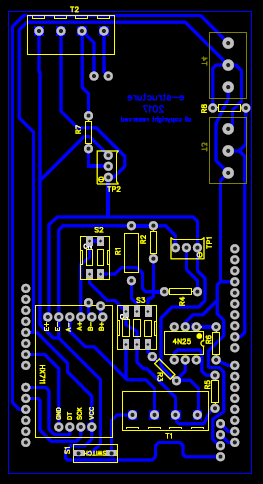 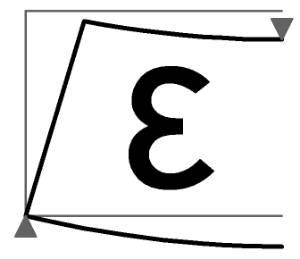 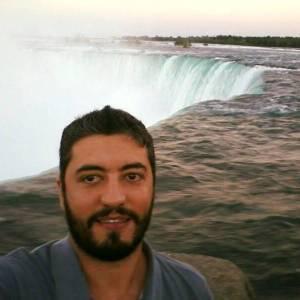 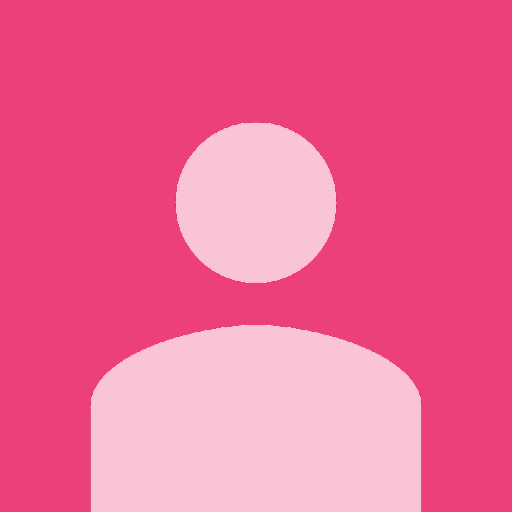