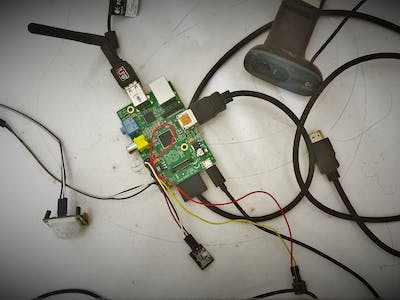 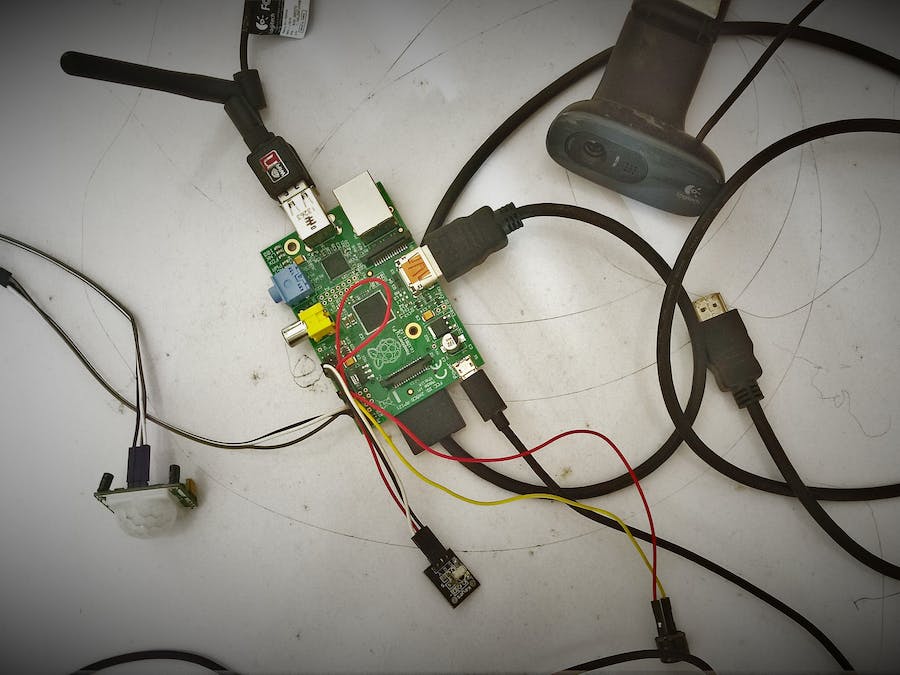 This hack uses a Raspberry Pi as a hub device. I have this installed in my corridor.

The Idea of Hub Device!

The idea of Hub device is to be able to design a model where you can easily plug-n-play new edge devices and be able to program using an event model.

When a new device comes in, it waits for Hub device to start pairing. Hub device assigns a Device-ID and queries for identity. Known device identities have their capabilities stored in cloud, otherwise, device responds to Hub capability query request with its capabilities. The edge device is then put to suspend state.

For eg: A PIR capability is to trigger an event on motion, a Camera device can subscribe to it. Thus, a camera only triggers when a PIR reports motion. Camera can in-turn trigger a light meter who generates a low-light event which is subscribed by light to turn on. Thus, we can build complex chain of events to tie all edge-devices together through the Hub and none of the edge device needs to reach to Internet.

I am trying to add social media integration, to be able to scan through my friends list and add all of them to my database, this way I'll be able to add more context to the results returned.

I integrated with my TV remote, so people in my family can see the door on TV with the same remote they would be switching channels (easy, right?). This action will not upload picture to Cloud and no mobile notifications. The event generated by IR receiver is acted upon by Camera and the output is redirected to TV instead of default Cloud path.

By my calculations, battery is going to last about six months since I am using low power states a lot, however I am happy with 2-3 months for now and working further to finetune the circuits to be able to last a year on battery!

A little intelligence will help here, if I can ask Cortana to watch for rains to stop and remind me when my favorite game is about to start and in the meantime I can watch a movie. However for now, my alarms are announced at home so I don't miss a meeting invite.

EDIT: I also have my fish tank story added to this project. I will publish details on how to build that in a separate post. I built a custom pH monitor and water level indicator which helps me change % of water and a Fish food feeder. When food supply is low, I let MannyBot know and it sets an alarm on my phone. The Alarm is handled by my app which uses Geo-Fencing and only triggers when I am around the supply shop, however when I am down to critical value, the alarm geo-fencing limit is increased to 100 km so as to ensure I go to the supply shop. Fish tank details on how pH value is changing and how frequently I have been changing water is available through the app. The water out of fish-tank goes to my plants. I will share more details on what my plan with that in my next experiment soon.

A few more use-cases to integrate through BT-LE and a complete rewrite of the app to cover for new module integration. It is fun to see how this small hub device is growing...

Since this has evolved in my mind and in my home setup, I am unable to share a comprehensive list or step-by-step details on how to build. I expect interested people to have comfort building IoT devices and Azure applications. I am also documenting my experiments as small projects on Hackster that you may refer.

Main Python script that captures a pic on motion. PIR Motion Sensor is connected to RPi Pin 4. Uses fswebcam to capture image through attached USB WebCam. IR Receiver is connected to pin 24 and buzzer on pin 18.

This script is triggered from TV remote when programmed button is pressed. The script takes a picture through USB WebCam and shows it on TV.

An inventory tracking system help you to find your items.

Where is my thing?