Project tutorial by Daniele and christian26

This project saves time and keeps the plant healthycontinously thanks to greenhouse automation. It is also able to communicate byboth visual and acoustic signal with external beings capable of receiving them.

The purpose of this project is to build a greenhouse usingArduino. The greenhouse deals with plants in a totally automatic way. Inparticular, it is based on an Arduino Uno board, to which revolve aroundseveral sensors useful to analyze the conditions necessary for properoperation. These include the presence of the humidity and temperature sensor(TMP36), two photo-resistance, a water level and finally an PIR HC - SR501. Theoperation of this project is to detect a set of data using the sensorsdescribed above and based on the value they detect, different mechanisms willbe activated that can keep the plant healthy.

1. In this project, twophotoresistors are placed above the top surface of the greenhouse, whichtransmit various values depending on the brightness of the externalenvironment. Subsequently you will average the values and according to it willturn on an internal light to feed the plants or you will act a servo motor thatis tasked with opening the upper panel allowing the light of the external environmentto radiate the shrubs inside the greenhouse, saving the artificial lighting incase of brightness needed to power them. Outside the greenhouse is placed atemperature sensor that is able to detect the external temperature, this factorinfluences the drive of the servo. If the detected value will be below a presetthreshold then the servo will not act even if the external brightness is highand the lamp will remain on to illuminate the plants.

2. There are two moisturesensors placed inside the vessels where it will check the level of moisture ofthe soil that will determine the dryness level of the plants and based on itwill act a pump that will automatically water the plants under the greenhouse.The pump will only act when the level of the liquid inside the tank, thanks tothe presence of the water level sensor that will allow the measurement, will beabove a certain pre-set threshold and will take the necessary water forirrigation from a where the sensor that will measure the level of the liquidwill be placed inside it. This sensor will allow a buzzer to sound and turn ona red LED only at the end of the liquid inside the container, it will soundonly in the presence of a movement in front of the greenhouse determined by thepir. While if the level will be high you will turn on a green LED. This processwill allow the construction of a greenhouse that manages completelyautonomously the plants it guards within them.

Images of the project being built

Images at the end of the project with two plants inside 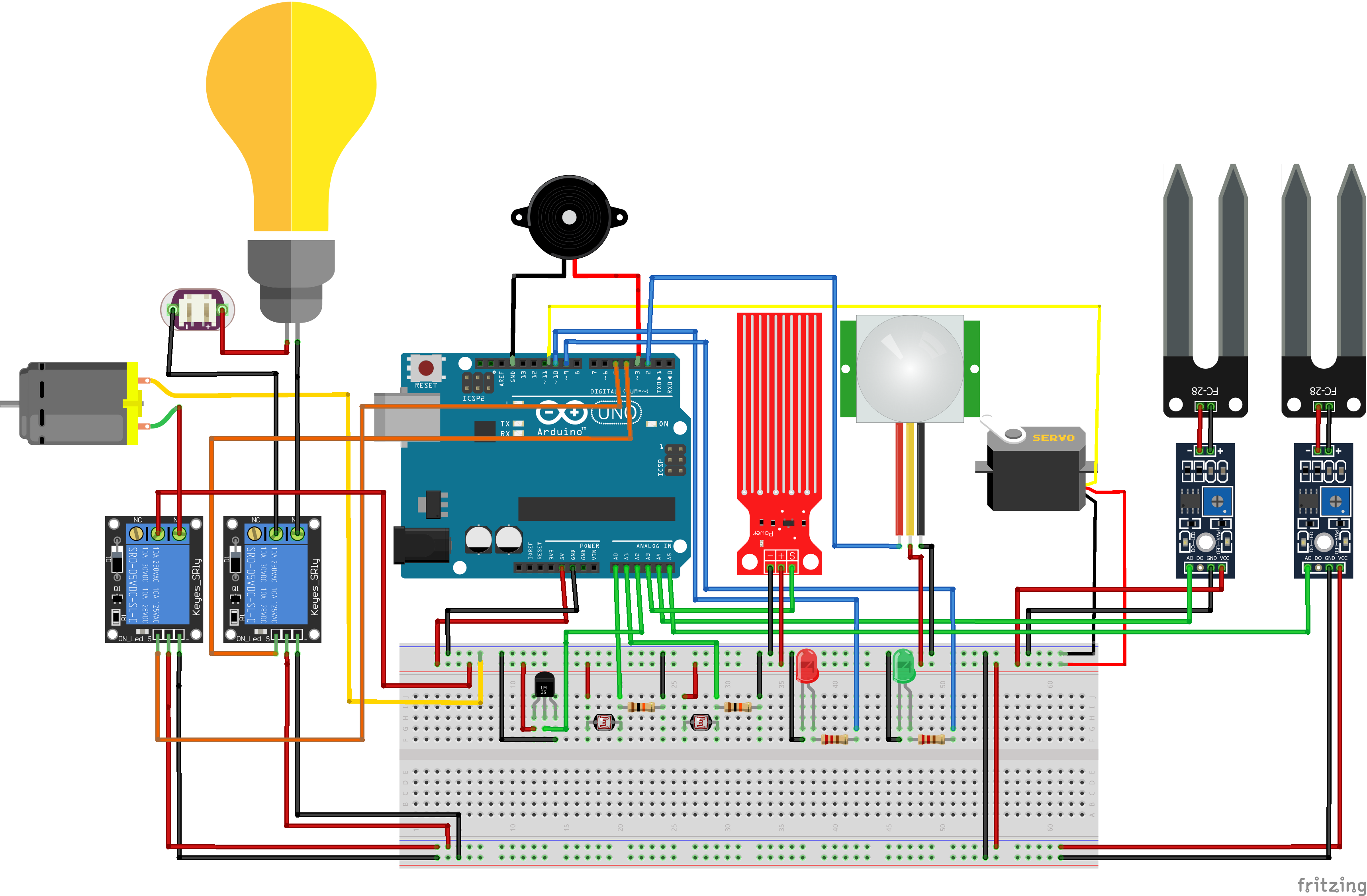