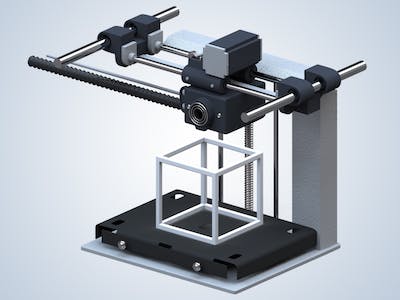 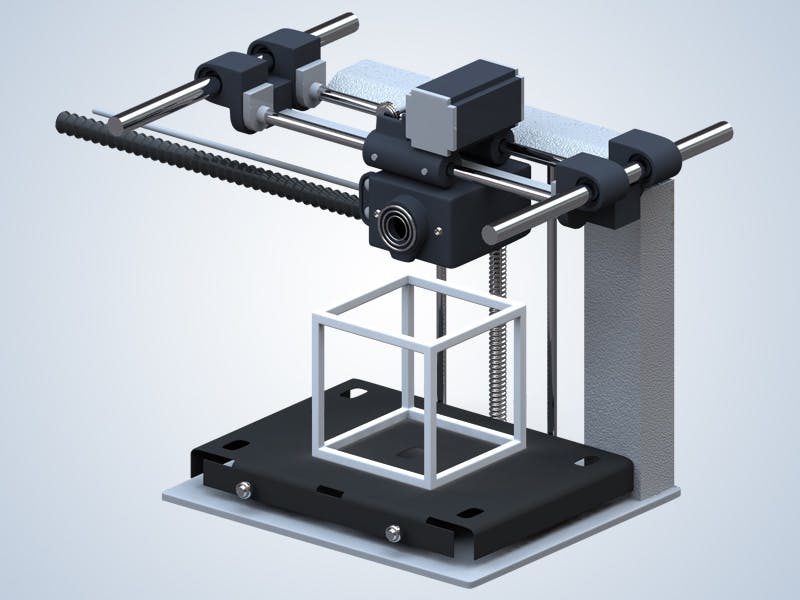 The Problem: Current smaller format 3-D printers are limited in their functionality and process controls to allow them to be as efficient as possible while producing the highest quality product.

By integrating the Edison® board into our custom built printer we can now address limitations that current manufacturers of the printer are not addressing.

The Edison board allows us to now integrate multiple process controls over a single platform.

This allows us to add additional components to the system that can greatly increase performance and quality.

The traditional line diagram for a printer looks like this, which is also what ours looked like until today.

By adding the Edison we can now integrate additional fans, temperature sensors and motor controls that will allow us to program control protocols in the software making it possible to create a very user friendly device that produces a consistent and high quality product seamlessly.

Edison essentially has allowed us to make a “smart” 3-D printer with a more dynamic mind which allows us to greatly expand the capabilities of the user.

Edison allows for massive scalability, which makes the evolution of this technology unlimited. Now process functions can be mapped and optimized. Motors, temperature and application speed can be calibrated based upon the application and controlled within the code which can constantly evolve. Devices can now be programmed with protocols that allow for precise optimization of controls. By utilizing Edison even functions unforeseen today have room to be added on in the future.

With the Intel Edison 3D printer data can be collected. This data can be stored in Microsoft Windows & SQL Azure. We can also begin to predict better and faster prints. By connecting 3D printing to the cloud the limits are endless sending 3D models to our friends and families printers.

It has been our team's pleasure to introduce Edison to 3-D Printing.

Rapid development could have only been achieved using JetBrains Python tools!

Execute web service commands to turn on additional fans, lights and temp sensors on Edison board. libmraa - Low Level Skeleton Library for Communication on GNU/Linux platforms Libmraa is a C/C++ library with bindings to javascript & python to interface with the IO on Galileo, Edison & other platforms, with a structured and sane API where port names/numbering matches the board that you are on. Use of libmraa does not tie you to specific hardware with board detection done at runtime you can create portable code that will work across the supported platforms. The intent is to make it easier for developers and sensor manufacturers to map their sensors & actuators on top of supported hardware and to allow control of low level communication protocol by high level languages & constructs.
https://github.com/intel-iot-devkit/mraa

Reprap Wilson, 3D printer design Published under GPL v3 This is my reprap printer design, a derivative from Josef Prusa's i3 with the following goals: Replace the waterjet metal frame / wooden box frame with an inexpensive and rigid frame made from standard 2020 Aluminum Extrusion. To make the build volume parametric (easy to scale up or down by 50%), with a parametric BOM tool (spreedsheet) to assist in part selection. To simplify construction of the printer by reducing vitamins and including detailed assembly steps as part of the design files. I've made an effort to reduce the number of unique parts (nuts & bolts) as much as possible. I've also incorporated single-piece Y ends that eliminate about 20 more hardware items. The repository has these parts: The STL files needed to build the printer. Documentation section where instructions and parts-list can be found. Some parts have corresponding OpenSCAD models which are kept in the scad folder. Various images of the printer/build process are in the images folder (beneath docs).
https://github.com/mjrice/wilson

Software to run linux webcam. edi-cam demonstrates live video streaming on Intel Edison using Node.js and WebSockets. Audio is not supported at the moment. See the demo in action here. The Node.js server is responsible for: Listening for the incoming video stream via HTTP. ffmpeg, a multimedia framework for converting and streaming audio / video, is used to encode the webcam's video to MPEG1. Broadcasting the video stream via WebSockets to all connected browsers. Serving web/client/index.html, which renders the video stream onto a canvas element. jsmpeg, a JavaScript MPEG1 decoder, is used to decode the video stream. This project was inspired by phoboslab.
https://github.com/drejkim/edi-cam 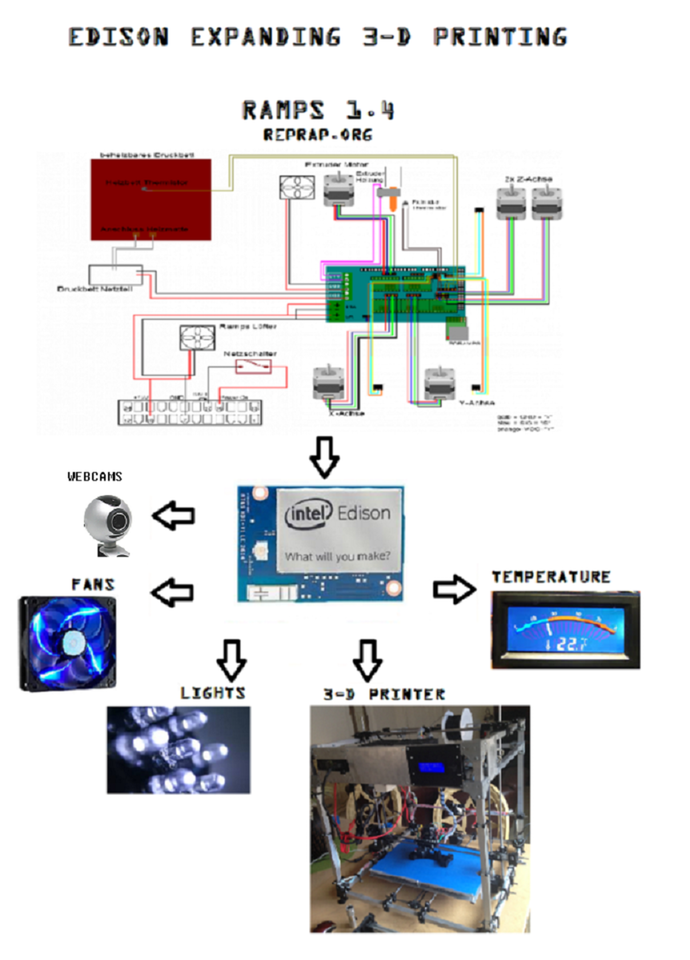 This is a mostly printed 3D Printer very suitable for a hobbyist. It's an easy and cheap way to get into 3D printing.

This is a simple and highly configurable CNC machine found at vicious1.com. It's perfect for a DIY hobbyist.