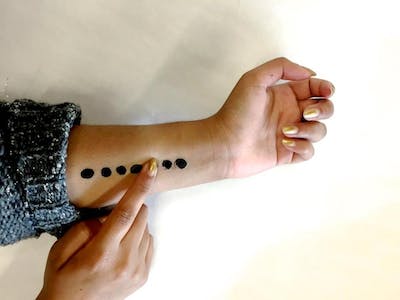 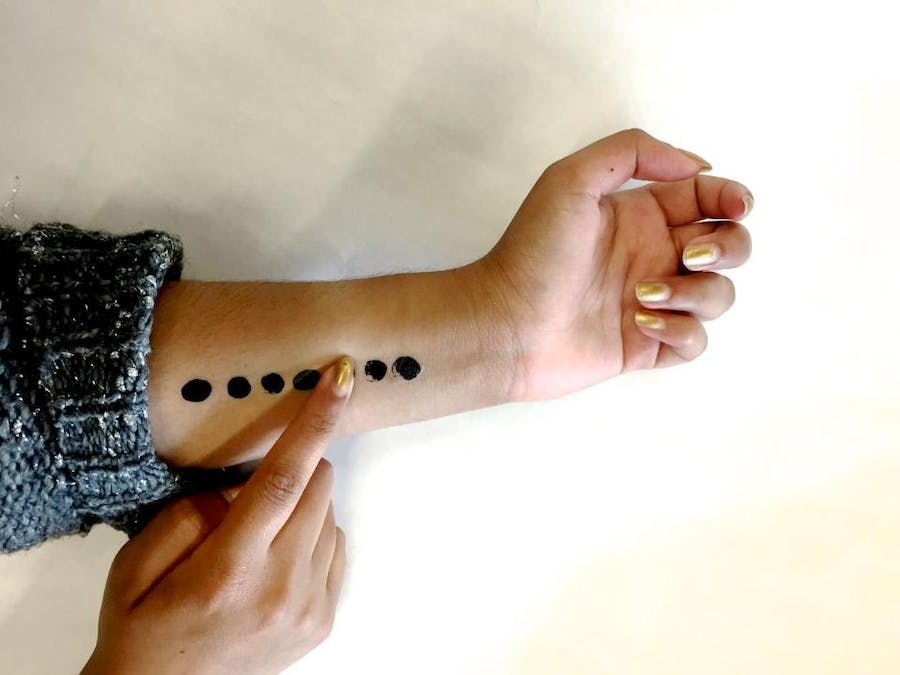 Habitatt is an interactive temporary tattoo that helps promote emotional help by preventing the formation of negative thought cycles. By discreetly touching their tattoo and producing audio feedback, a user can change their mindstate and over time, create positive mental habits.

Habitatt empowers users to interrupt negative thought patterns and replace them with positive ones. By changing their natural response to mental stresses, users can actually rewire their neural pathways over time, leading to a greater command of mental health.

It is common knowledge in cognitive science that "neurons that fire together wire together". Effective non-medicinal treatments for mental illness, such as cognitive based therapy, have been based off of this fact, by helping patients rewire their existing, negative patterns into positive, new ones.

We were interested in looking into the mental health space because it seemed to us nobody was designing for this need. In particular, we were fascinated by how we might bring habit-forming behaviors to the wearable space.

We began by brainstorming types of habits or routines that we could encourage, such as teaching kids to consistently brush their teeth, or reminding patients to take medication. Once we settled on addressing an individual's mental state, we also brainstormed several possible interactions with the tattoo. We decided that audio feedback would allow for a personal and effective experience.

Our target users are young adults dealing with mental health issues in the 18-30 age range. With 1 in 4 college students affected by a mental illness, the need to design for this community is apparent. However while the prevalence of mental illness is evident, dialogue on this subject continues to be stigmatized and few technologies are designed with these users in mind.

People place tattoos on their body to show a part of who they are: Habitatt aims to break down the stigma of mental health and bring conversations about it to light. As Andrew Solomon, the speaker in the TED talk titled, "Depression: the secret we all share," says, "Silence makes the depression worse." ()https://www.ted.com/talks/andrew_solomon_depression_the_secret_we_share/transcript?language=en) In contrast, Solomon found that speaking about his mental illness encouraged others to talk about their similar struggles which they thought they were alone in.

One goal of Habitatt is to break the silence concerning mental health and help users take charge of their own mental habits.

Habitatt consists of three different layers on the skin. The layer closest to the skin is an insulating layer, designed to help mitigate noise readings due to the natural conductivity of the skin. The next layer consists of conductive ink, joined to wiring via copper tape. This serves as the actual circuitry, which we can connect an Arduino and other components to. The top layer is the art layer, or the visible tattoo design. Based on user interviews and independent research, we created a variety of designs symbolically associated with healing and well-being.

Using a conductive pad in the tattoos led us to use a capacitive breakout board and Arduino to detect the interaction. With all the hardware we used in this project, we wanted a small, contained enclosure that neatly managed all the components. We wanted to design the enclosure to be worn on the body in a discrete location, and so we eventually decided on creating a housing that clips onto the belt.

We chose to construct our enclosure using laser cut acrylic plates that we formed a box with. By using a laser cutter, we were able to cut down on production time and troubleshoot faster. Below is the Illustrator file we used for the enclosure.

In the future, we envision a product where the user could customize the audio feedback to their own needs, such as a voice recording, or capturing audio from uplifting memories. It would also be interesting to look into creating a smaller enclosure for the microprocesssor, uploading wirelessly to a tattoo, and using other sensory experiences such as smell.

Here is the PDF file of our presentation we gave to the class about the Habitatt story.

Code for the Arduino Micro that detects touch and triggers the audio file.

Download
Base of the enclosure that houses the PCB and hardware components. Has slots for USB, headphone jack, and wires connecting to tattoo.
Prov%203%20enclosure%20base.SLDPRT

Download
Belt clip attachment for the enclosure. The clip slides into the base and is designed such that other wearable modalities are possible (arm band attachment, etc).
Prov%203%20enclosure%20belt%20clip.sldprt

Download
Wiring for the audio breakout and audio jack, connected to Arduino Uno. 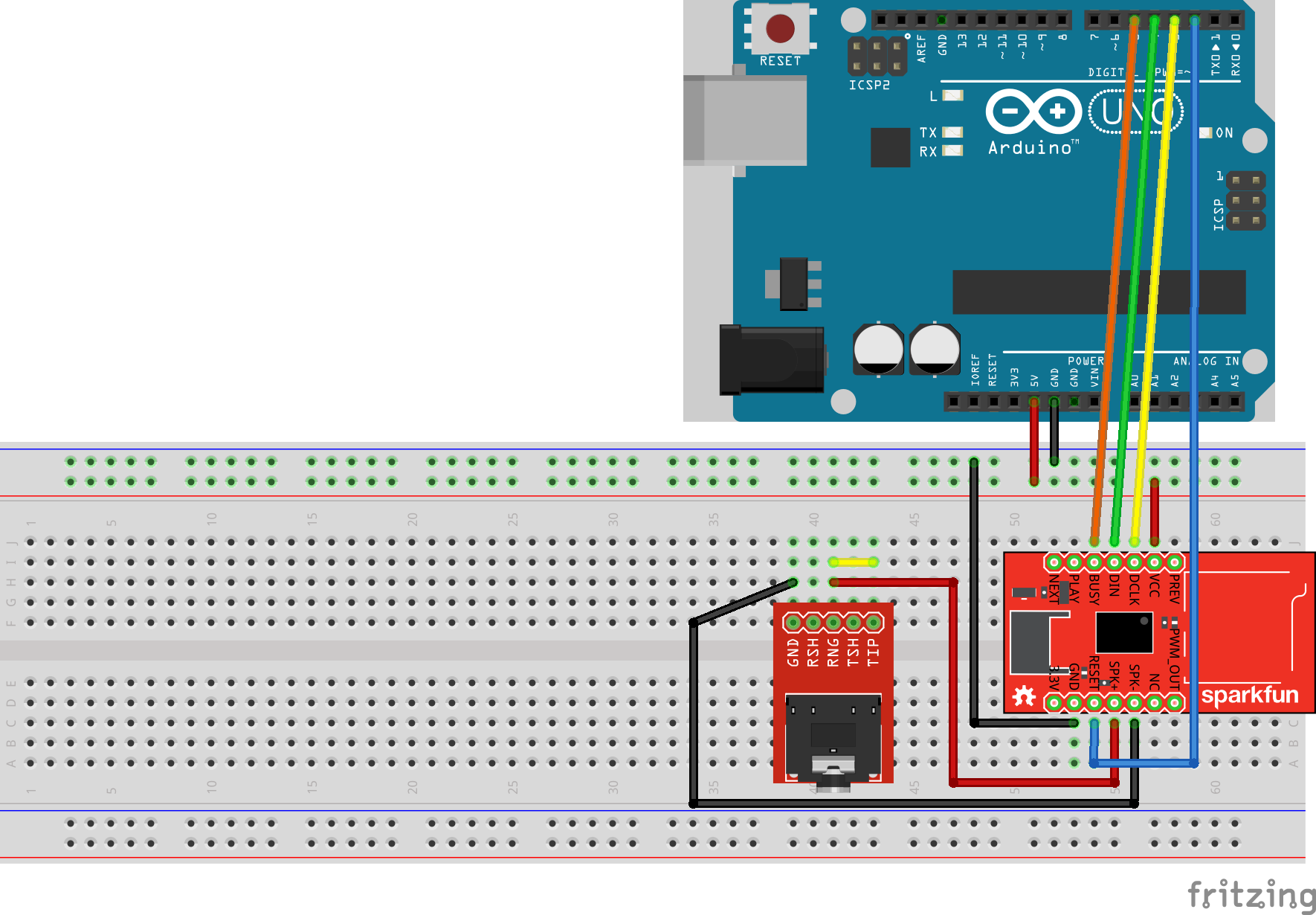 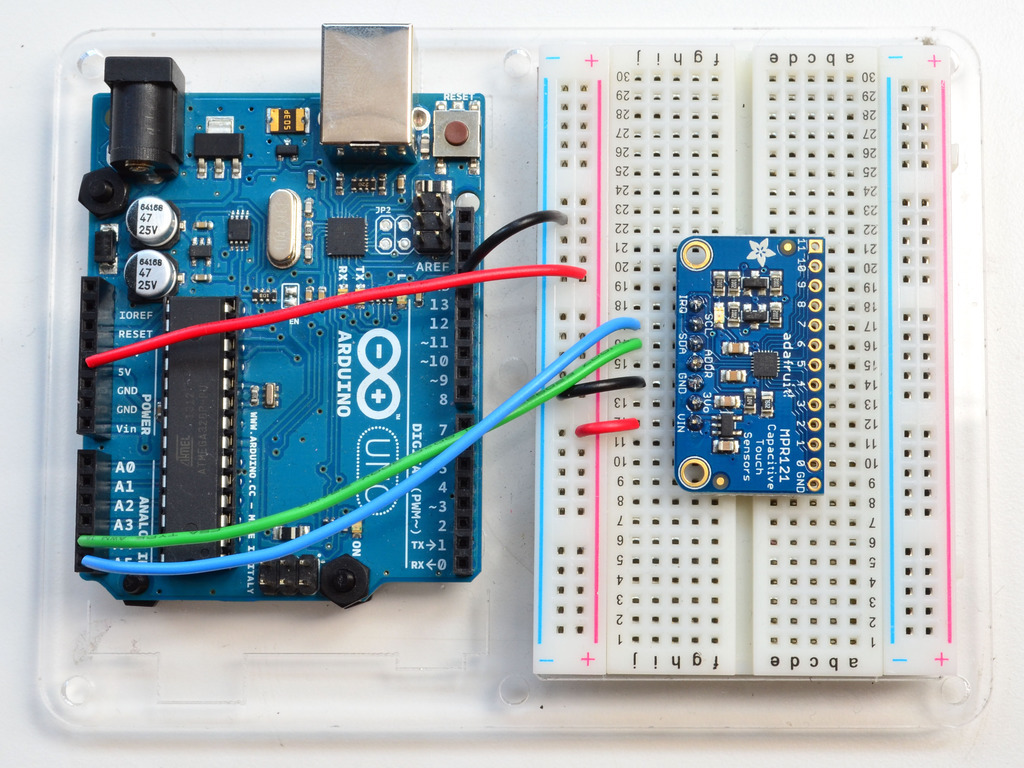 Bring Touch Control to the Arduino. Use interesting touch sensors like Carrots or Beets to make a "Beetbox"

Just Veggin with an Arduino Beetbox