Hey everyone what's up,

So this is my "DODECAGON" which is a huge Nanoleaf like device which is made from combining 12 PCBs together at a certain angle to make a dodecagon shape.

The goal for making this project was simple, I wanted to make a huge Nanoleaf like Setup with PCBs, Previously I made this similar version which was small so I wanted to enlarge that project so I created this Dodecagon Portal Project which is actually version 2.

This Project utilizes two PCBs one is the mainboard and another one contains 7 WS2812B LEDs.

Mainboard has ESP12F Module hooked up with WS2812B LEDs. The mainboard generates the signal for the first WS2812B LED, through NZR communication mode, the first pixel obtains the data from ESP8266 via DIN Port and then sends the 24bit data to the second pixel via its DOUT Port.

Main Board Contains 7 PCBs so when the data reaches to 7th pixel, we add another PCB onto the main board which adds 7 more pixels to this setup, the data then transfer from the first PCB to the second PCB, and so on.

The Second PCB doesn't have an ESP12F module soldered on it, it's just a breakout for 7 RGB LEDs.

My idea here is to solder 12 PCBs together in this arrangement, each PCB will get soldered to each other at an angle of 150, just like a classic dodecagon.

BUT Buying two different PCBs will cost more so I prepared this Setup in such a way that if I need to use the ESP12F which is on the bottom side, I have to add a 0Ohms resistor that connects the DIN port of the first LED with GPIO12.

Because of this, we only need to add ESP12F to one board, and the rest of the PCBs can be directly soldered with WS2812B LEDs without changing anything.

here's the schematic of the main PCB.

After Preparing the PCB for this project, I send this to PCBWay for samples.

Duh, because their service is top-notch and great.

I placed the order and received these cool-looking PCBs in just a week!

I have to say, the PCBs that I received were nice as expected, PCBWay, you guys rocks!

Check out PCBWay if you need great PCB service for less cost.

after receiving the PCB, it's time to start the assembly process.

Assembly of Main Board

To Prepare the first PCB which would be this Main Board, I first applied solder paste to each component's PADs and then pick and place each component in their assigned place in the right order.

After this, I turned on my DIY SMD HOTPLATE which is a ghetto Hotplate for reflowing PCBs. I place the PCB on it and let the solder paste melt.

This whole process took hardly 5 minutes and the end result was this PCB.

Now we need to add ESP12F on the bottom side with a Soldering Iron because we cannot use our hotplate for this task.

We First add ESP12F in its place and then add the AMS1117 Voltage Regulator along with 10uf Cap, 100uF Cap, and 0ohms Resistance.

then we add THT Components which are the Main Power Switch, Programming header pins, and this THT Micro USB Port.

In the PCB design, I made a mistake.

To correct this, I just cut down both of its tracks and soldered two wires separately to make positive terminal negative and negative terminal positive.

We only have to do this change in a single PCB as this is only for supplying power to the Main Board.

After Preparing the Mainboard, we need to make other 11 Boards which will only have 7 WS2812B LEDs and 3 10nf Capacitors each.

First, we gather all the components that we need which are 77 WS2812B LEDs and 33 10nF Capacitors.

we start by placing solder paste to each component pad one by one.

For such a task, a stencil is mandatory which I didn't get because I'm such an idiot.

Anyways, this project required a total of 12 PCBs, and 11 of them are breakout boards for ws2812b so we need to reflow all 11 PCBs one by one by first applying solder paste to components pads and then placing the LEDs in their assigned place and then reflowing the PCBs all together one by one.

this will take an eternity to finish but after few hours, you will get these cool-looking PCBs.

Now, before the final assembly, we first need to check each PCB as they might not work because I probably have not applied solder paste properly to each pad.

(Note to self- USE STENCIL IN THESE KINDS OF PROJECTS)

To test each Board, I prepared this setup which consists of an Arduino nano connected with a push button. I've uploaded the Buttoncycler sketch which changes the color of WS2812B LEDs on Button Press.

We have to manually solder VCC, GND, and Din Port to 5V, GND, and D6 of Arduino Nano board.

then we provide supply via micro USB cable and press the button, if PCB is shorted the setup won't work and if it does work then this means our setup is perfectly soldered and now we need to remove the wires from this PCB and add the next one for checking.

this will also take time.

After checking all the Boards, all that's left to do is the final assembly.

The shape Dodecagon has 12 sides, the internal angle between the two sides is 150°. To Solder this setup at a proper 150° angle, I modeled this JIG in Fusion360 which holds two PCBs at an angle of 150°.

By putting the JIG at both sides of two PCB, we can securely connect two PCBs together and solder them together by adding solder wire between their two solder pads.

This whole Assembly process involves me putting two PCBs together and connecting them together by soldering their pads together.

No glue is required here, PCBs are being held in their place by solder joints.

to give this Structure more adhesion, I soldered.8mm wire on the outward sides of two joints to give the structure strength from the outside.

Making this kind of stuff with PCBs is possible but it's not really durable.

this structure is so fragile that if it drops from this table, solder joints might tear off and this huge dodecagon will be destroyed!

Anyways, let's flash some sweet sweet code in this setup.

Now, I will First Upload this code to this setup which is actually a hello world code of WS2812B LEDs.

For Uploading the code, I will be using my Nodemcu programmer which is actually a NODEMCU whose ESP12F module is powered down and we are using its CP2102.

For Detail version, check out my post about this process. -

The Nodemcu programmer setup has these breakout points that get connected with ESP12F Module.

I Jumper wire between ENA and GND Pin on Nodemcu. this will turn off the ESP12F of the Nodemcu and our external ESP12F will get connected with the Nodemcu's CP2102 chip

after uploading goto the serial monitor and hit the reset button on Nodemcu. as you can see, our setup has been connected with the smartphone

now copy this IP address and open this in your web browser and BANG.

So here's our DODECAGON setup, alive and running.

It's being powered by a 5V 2A Charger and yes, it requires a 2A Charger as it's drawing a lot of current than a regular Neopixel ring.

If this video was fun then do not forget to hit that subscribe button!

Thanks PCBWAY for providing PCBs for this project,

Check out PCBWay for getting great PCB service for less price.

and I'll see you guys with the next video! 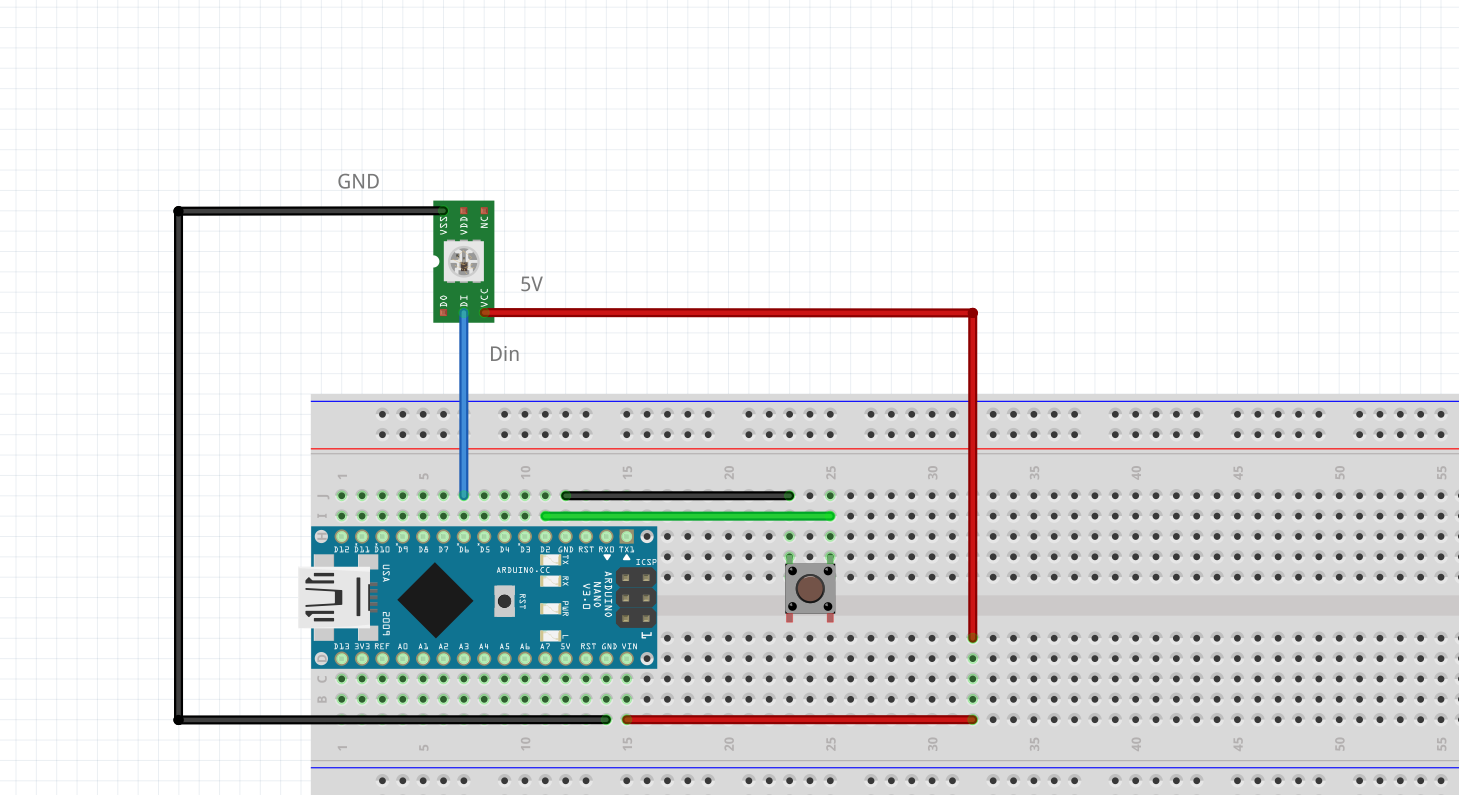 Arduino Rotating Platform Based on NEMA17

HexaLeaf Setup made from combining 6 Custom WS2812B PCB together

The Master Turret Control for controlling multiple Portal turrets per my other build.

Project in progress by Tejas Shah and Kavyashree P

Bring your ideas to life without considering that how to program a server to create a host for web communication using TheAmplituhedron.

How To Use TheAmplituhedron.com To Improve IoT Projects