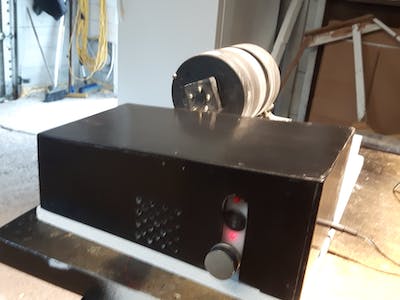 A bells and whistles rock tumbler for under $10. Too good to be true? Nope, it's not. 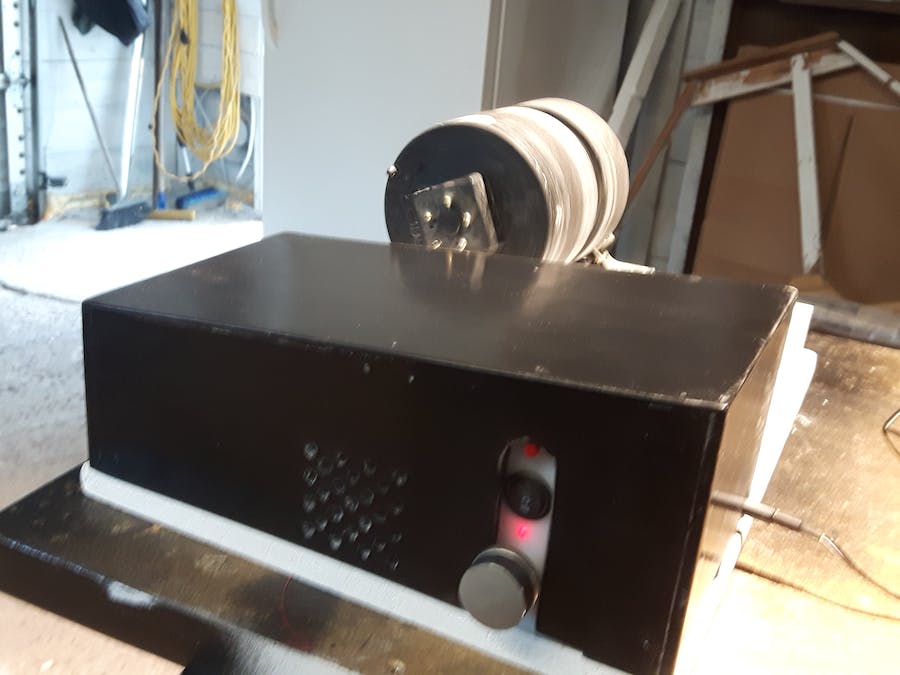 A bells and whistles rock tumbler for under $10. Too good to be true? Nope, it's not.

Another of my shaky videos

Being lucky enough to live in an area with a good selection of rocks and the wife wanting to make some trinkets led me to this project. Below is a picture of some of the stones Tumbled with this project and YES that is Pyrite, Gold, and other semi precious gem you can see in there !

A little research on the internet showed up some great results and being a bit of a senior geek I decided it might be worth a shot. The pictures are from the second version apart from the base and roller assembly which remain the same. I do have a MK III in mind but that will be another story.

I don’t have a great access to many things so on most occasions things are cobbled together for a quick mock up out of things I have to hand. This one is no different. ALL the wood is from the kitchen we tore out. Only the smallest remnants ever make it to the garbage dump. A quite odd assortment of screws brackets and other miscellany make up most of the rest of the basic board.

The main drive roller was salvaged from an Epson printer and had a fine grit on it which worked for a little while until the grit on the drum proved too aggressive. That was scraped off and replaced with some self-stick cloth tape I had lying around and this is proving to be superb.

The idler roller is just a 12” Galvanised nail to which I added 4 spare rubber grommets from an electrical job I did around the house a couple of washers to prevent side slip and a small self-tap screw (again salvaged from something).

It’s a good idea to keep the two rollers parallel and not to have the drum sit too deep into them as this will increase the torque need to turn a fully loaded drum. There is also a small cupboard catch roller as I know there is a very tiny amount of drift in my version but it is so minimal that the roller only turns one in a while as the load in the drum shifts and it has never moved to the drive side so long as the whole thing is placed on a FLAT and LEVEL surface.

Problem was I had nothing to use as bearings. But being as this was a prototype I decided on plastic cable clips I had lying around. Turns out they are actually exceptionally good so long as you add a small dab of lithium grease (Not the same as dilithium crystals).

My first attempt used a direct drive approach but none of the motors I had on hand were up to the task. So I dug out the belt and motor from the salvaged Epson printer and used those hashed up on a simple metal “L” bracket. This too is turning out to be exceptionally durable but I did notice that after about 48 hours solid run the motor was getting a little warmer than I wanted. No problem I have plenty of salvaged fans so found a nice small one and hot glued it behind the motor and the problem is fixed. Now it doesn’t even get warm let alone hot.

At this point I had a direct 12 volt feed but I really wanted to make it a little different and have some control over the speed. Enter the cheap Chinese Arduino Pro Micro.

Some time ago I picked up 5 of these for $9.00 CDN so it would make an ideal candidate for this approach.

Now I want this little Arduino to last as long as possible and know that over running the voltage regulators is a prime cause of failure. I always have a small stock of different Chinese voltage regulator boards so popped one inline to take off an 8.5 volt feed for the Micros RAW input. This should let the board run without any real issues for a long time to come as the run times for tumblers can be anywhere up to 14 days solid.

Now how to control the speed itself?

Enter the Chinese again with a simple MOSFET module. This means I can use the PWM ability of the Arduino to its best advantage and ramp up and down the speed over time. Although not a random factor it did show up unexpected results on some of the MK I tests with better finishes in slightly shorter times.

Not quite sure why but I suspect the different speeds allow different particle / rock sizes to travel at different rates.

So we have all the basics and now we just need a DRUM for our rocks.

Well my Garage is a plethora of unused items bought for projects and then finding some bits unused.

The year before I had changed up the rain run off system around the house (No Arduinos involved just regular gravity). I had an end cap and an inspection cap also a couple of really short bits that I suspected I would throw away one day.

Ok its not the best picture but you can see the finished (twice) result. The one thing I really did learn from the MK I was that after taking so much pounding the super fine slurry was going to be an issue.

Removal of the cap had proved an issue on 3 occasions. First time were small leaks from the super cheap “PLASTIC” seal. I could not find a suitable “O” ring and also noticed a brand stamping on the end of the Cap to pipe section that stood proud and was the biggest part of the leak. Fixed that by some fine sandpaper on a flat surface after taking off most of the errant protrusion. It still had tiny leak via that darned plastic seal. Ok dump the seal and as a “bodge” more than a fix I cleaned up the mating surfaces and added silicon sealer. Leaks fixed YAY but that slurry was still an issue getting into the threads.

Fix was super, super simple. Coat the threads with a good dose of grease. But now I know it’s going to be AIRTIGHT which will be an issue. Dig out whatever I have that may be useful for a BUNG. Pop a hole in the endcap to take the bung and problem fixed.

Now I wanted to cover the electronics but leave the controls on place to bring on the random bit of plastic that I think was part of some curtain arrangement. It stays on the board if I have the cover off and lets me play without having long wires running off to the cover.

Tidy up a little and use a 1” “L” bracket meant for some woodwork project many years ago to hold the 12 volt power inlet socket.

Tests proved great so on to adding some bells and whistles.

Rev counter…Well in a box of sensor items bought a long time ago was a hall effect sensor and coming from the head of a laser sled out of a DVD player was a nice tiny NEO magnet mounted with a dab of hot glue to trigger it.

And if you are wondering why I didn’t use the optical encoder wheel already there. I used the fine reader assembly in another project a while ago and most of the ones I have are simply not good enough to count such fine detail on the wheel.

Besides anyone tried counting those 99,100,101,Oh fluff start again…

At the moment All I want to do is read each individual turn of the shaft and use that in a later version as a run time counter (and a couple of other things but again that’s for MK III). The sketch is not too complex although it still contains some aspects I haven’t fully utilised at this moment in time.

That’s not really the point anyway right now as this is still a fully functioning project and shows a little of how low you can go in engineering tech to get a working model up and running. Total cost is only based on the newer items and comes in well under $10 CDN. Arduino Pro Mini, Voltage regulator MOSFET Module, Switch, 12 volt 2.1mm PSU socket, Reset switch, Hall effect switch.

All else was salvage or recycled.

It is currently getting a small upgrade to include a Nokia 5110 screen.

Few reasons for that but let me mention the biggest reason.

The drum weight will vary and a fully loaded drum could weigh in excess of 4 pounds. That’s a lot to expect a printer motor to spin.

The fix for that is in two parts. First is in the sketch itself and use a different PWM frequency to give the motor a bit better start. Second is to allow a trim factor for the START RPM. That will allow me to have a wider speed range for a lighter loaded drum but if you saw some of the "BOULDERS" the wife has been picking up I may have to "supersize" the DRUM !

In normal engineering practice you would start a larger load slower and ramp up to the operating speed.

This is not always the case where PWM is involved so in this instance I can override the normal start RPM meant for lighter drum loads to a higher start RPM.

Clearly I need to be able to know what that number is as there is no dial marking on the potentiometer. And the value is actually MAPPED from MINUS to PLUS 20 RPM giving me a 40 RPM spread. I know 40 RPM doesn't sound much but in practice on this project it is actually perfect.

Screws that were part of the direct drive test are GONE.

Baffle is in the drum and I am looking forward to the tests for that.

Power switch re-wired so I now have manual and auto. Also added a 1N4002 to the PWM power feed just as a precaution. and a capacitor across the motor terminals which I should really have done from the start

MK III will have

Many sites will say you need to add special grit or garnet to your rock tumbler.My initial results from a selection of sand and small stones from my driveway would suggest that is not always the case! Some also say you need a special finishing compound...Will let you know soon if that's the case As I am using an "alternative" method for that too!

Ok I tried the soap flake method for finishing (no pun intended) and it was quite a spectacular fail requiring a good deal of scrubbing to get the built up soap off the almost finished rocks. 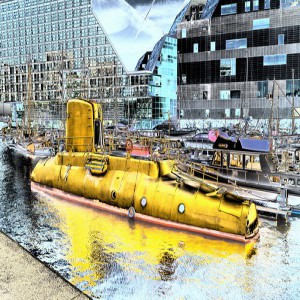 After 20 years, my underground school rock band reunited for a few concerts and I've decided to develop a small Arduino jukebox.

Arduino Jukebox for My Rock Band

Automatic fans act in stages depending on atmospheric conditions with an alert at full capacity.

Project in progress by Bob Computeers