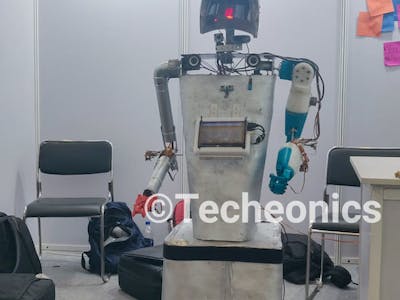 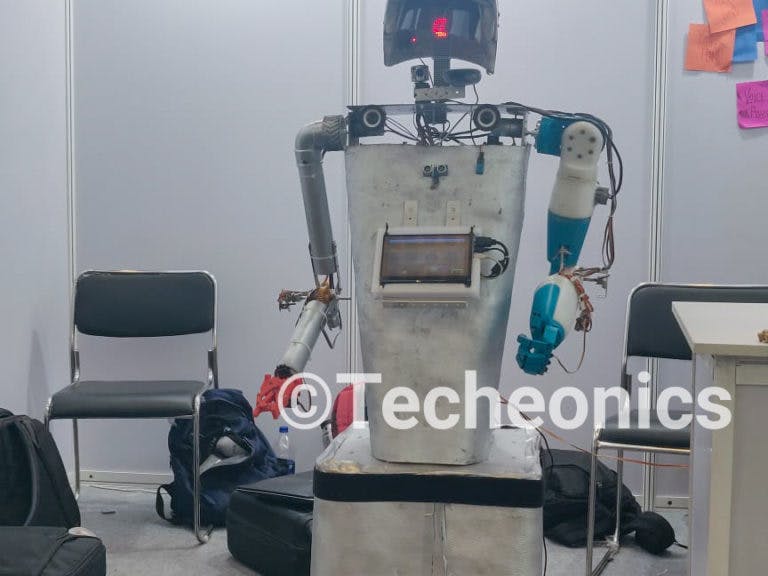 A year ago, we started this project name SimAr which stands for Semi-Intelligent Multifunctional Robot, before this we have Developed several Prototypes and after that, we started developing SimAr. It took us approximately 2 months to develop this Robot.

First, we started with the development of the 3D Printed Arm and we used some Premade design for reference, and combined with our own design, this arm is capable of having the freedom of 7 axes in free air. We used 4 metal geared servo motors (MG 995) for controlling the movement of the finger, the movement of small and ring figures is done by a single servo motor. We have a fifth servo motor in the forearm which helps the wrist to rotate. As I mentioned above that this arm is capable of 7 axis freedom in movement but due to lack of some specific motor we are not able to do that and we have to modify the design so that we can have an up and down movement of the arm and forearm, for that we CNC milled in the arm to make some space for the motor available at that time. We used a Pully system for the elbow movement and with that, we developed a cheap system so that we can use a dc motor as a servo for specific elbow movements. After that, we designed a motor hub for the shoulder joint so that we can connect the shoulder joint of the arm to the motor.

When the 3D Printed arm was done after that we started working on the 2 Arm which was made up of some PVC pipes and the elbow joint was controlled by a dc motor which uses worm and pinion gear design and the hand part was equipped with 2 servos and have a gripper that is also 3D printed and have many more attachments.

When the arms got completed, we started working on the body for that we first made some designs on the paper and finalized a design. After that, we started working on the base, for making the base we used a plywood sheet and cutting according to the dimension. After that we made some custom motor Holders with u shaped thick metal piece and we cut this metal piece into 2 parts and made some holes to fit and fix the motors and the motor we used for our base is a side shafted highly metal-geared motor of 200 RPM. We use 4 free wheels on the base for balancing and smooth movement of the robot. When the base got completed, we started working on the body, first, we developed the body from base to waist and we use aluminum sheets for that. After that, we joint all aluminum sheets with plywood to give the desired shape and then we started working on the waist to neck section in this we used aluminum sheet and screwed with thin plywood to give the desired shape and a servo is fitted in the neck so that the head of the robot can move. In the end, we covered the robot with cardboard and painted with a sliver aerosol spray for the glossy finishing of the body.

When the body got completed, we started working on the wiring and the electronic system in the robot. The material we used is 4 Arduino Uno, Raspberry Pi, L298N Motor driver boards, boost converter, 7-inch touch LCD, Logitech and Intex camera, 8*8 metrics display, amplifier, speakers and wires for connection and zip tie for the net and tidy wiring. We used Arduino for controlling the motors and servo in the robot, Raspberry Pi is used for image processing, facial human tracking system, and voice recognition system. The LCD is connected to the Raspberry Pi for displaying the output.

When the wiring and electronics are done after that working on the programming got starts several codes were written in python and embedded C for the Raspberry Pi and Arduino and it took approximate 2 to 3 weeks to complete the programming section and after that, we tested the robot completely and every system in the robot is working properly.