I hacked a Pie Face game to give me complete control over if and when the pie is thrown.

I hacked a Pie Face game to give me complete control over if and when the pie is thrown.

You can view the basics of how my machine works, and some clips of it in action, in the video below.

This video comprises a holistic overview of my project

In this article I will explain in more detail the process through which I arrived at my current design. For the sake of clarity, some concepts found in the video will also be covered in this article.

When I first had the idea to hack Pie Face, I had several design goals in mind:

In short, I wanted to have complete control over the throwing mechanism of the game, without anyone else noticing. A daunting task to say the least. The main problem being packing everything into a very limited volume.

This module contains all of the mechanics of Pie Face. As you can see there's a lot going on under the hood of this game. The lever on the right in figures 1 and 2 is what the purple throwing arm attaches to, and the large gear in the center of figure 2 is what is rotated by the knob on the side of the game. If you look closely at figure 2, you can see tiny wedges scattered around the inner track of the gear. As you'll see in the following animation, these wedges are the key element that makes the game run.

Figure 4: Animation illustrating how Pie Face works with only 2 wedges

This animation represents how the mechanics of Pie Face operate. The large gear is turned by the user, once the idler(shown in red) is forced upwards by one of the wedges, the throwing arm(shown in purple) is released. There are only 2 wedges in this animation for the sake of simplicity. As you can see in figure 2, the actual gear has many more wedges scattered randomly around its inner track. This means that Pie Faceisn’t random at all! It’s just designed to feel like it is. In reality, there is a defined pattern for when the arm will be triggered.

Figure 5: Animation illustrating how the mechanics of my hacked version of the game work

I hacked the game by doing the following. I took apart the mechanics module, sanded down the triggering wedges, and drilled a hole in the idler. Then I attached a fishing line to the idler, routed the line through an eyebolt, then attached the other end to a servo. Now, the throwing arm isn't ever triggered unless the servo pulls down on the fishing line.

I won't go into detail on why I chose this method to hack the game over others, as that was covered in the video. But I will say that this method willnotworkwithamicro-servo. The torque required to overcome the force of the idler is much higher than a micro-servo can handle. I used a servo with an output torque of 20 kg, and that has worked great so far.

On another note, I was initially concerned that the amount of noise the servo made would tip people off. And after initial testing, I discovered that you can hear the servo when it's turning inside the game, but the sound is so brief that it doesn't raise suspicion.

As far as electronics go, I used an HC-05 Bluetooth module to establish communication between an Arduino Nano, and an app on my phone called Serial Bluetooth Terminal. Many different apps exist for interfacing with Bluetooth modules and an Arduino, but this was the one that worked best for me. Connecting to my Bluetooth module with this app gives me direct access to the Nano’s serial port, which allows for extremely simple commands to be used to communicate with the Nano.

During the early stages of development, I used an ESP8266 WiFi Arduino to establish communication between the phone and the Pie Face game. This method worked fine, but I quickly abandoned this approach in favor of Bluetooth, which would allow me to connect to the game even if there wasn't a Wifi network available.

My first iteration was really rough around the edges. All the connections were hot glued and taped, and the power supply was a AA battery bank I salvaged from an old RC car (figure 8.)

In order to ensure the arm was triggered at the exact moment the user turns the knob (as it does in the original game), I hot glued a limit switch right beneath a protrusion that oscillates back and forth when the central gear is rotated (figures 9-10.) I then programmed the Arduino Nano to wait for both a trigger from my phone, and a trigger from the limit switch. Only when both of these conditions are met does it launch the arm.

I installed the eyebolt for the fishing line to run through right beneath the chin rest (Figures 10-11.) Technically this modifies the outward appearance of the game, but it hides underneath the chin rest quite nicely, and no one would suspect anything if they saw the end of a bolt on the game anyway.

After I took the V1 out for a little test drive (the outdoor game of Pie Face in the video), I decided to rebuild my V1 and make several design improvements.

The V2 was a huge improvement over the V1. I made two main modifications to my original design when I build the V2, namely:

Something that is really neat about the software I wrote for my hacked version of Pie Face, is that it utilizes the limit switch to allow me to specify the number of turns I want the game to wait before activating the arm. It's basically a delayed activation feature. This allows me to send the character "5" to the Arduino Nano from my phone (this sets the delay count to 5 turns), then go to the camera app on my phone, and record my friends as they get hit!

All in all the V2 has less potential points of failure, and it worked like a charm in field testing (the indoor game of Pie Face in the overview video).

If you decide you want to make your own hacked Pie Face game, make sure your power supply has a decent capacity. I mention this because in order for the outward appearance of the game to remain unchanged, I didn't install any kind of power switch. This means the unit must be powered on when assembled, and the battery has to last from the time it's assembled, to the time you start to play the game. The USB battery pack I used has a rating of 2600 mAh, and it can power the game for up to 6 hours when it isn't in use (i.e. it won't power the game for 6 hours while you are playing it, as the servo moving would drain the battery much more quickly.)

All in all, I'm very pleased with the way this project turned out. It was a great engineering challenge, I had a blast doing it, my friends didn't suspect a thing, and I was able to fulfill all my original design criteria:

If I ever decide to make a V3, I will probably:

Additional images of the V2 are shown above.

Comments, questions, and criticism are all welcome!

Download
Open in Fritzing to see the circuit diagram for this project.
piefaceschematic_rS5abB5h7K.fzz

Download
For those unable to view the Fritzing file, here is the circuit diagram view as an image. 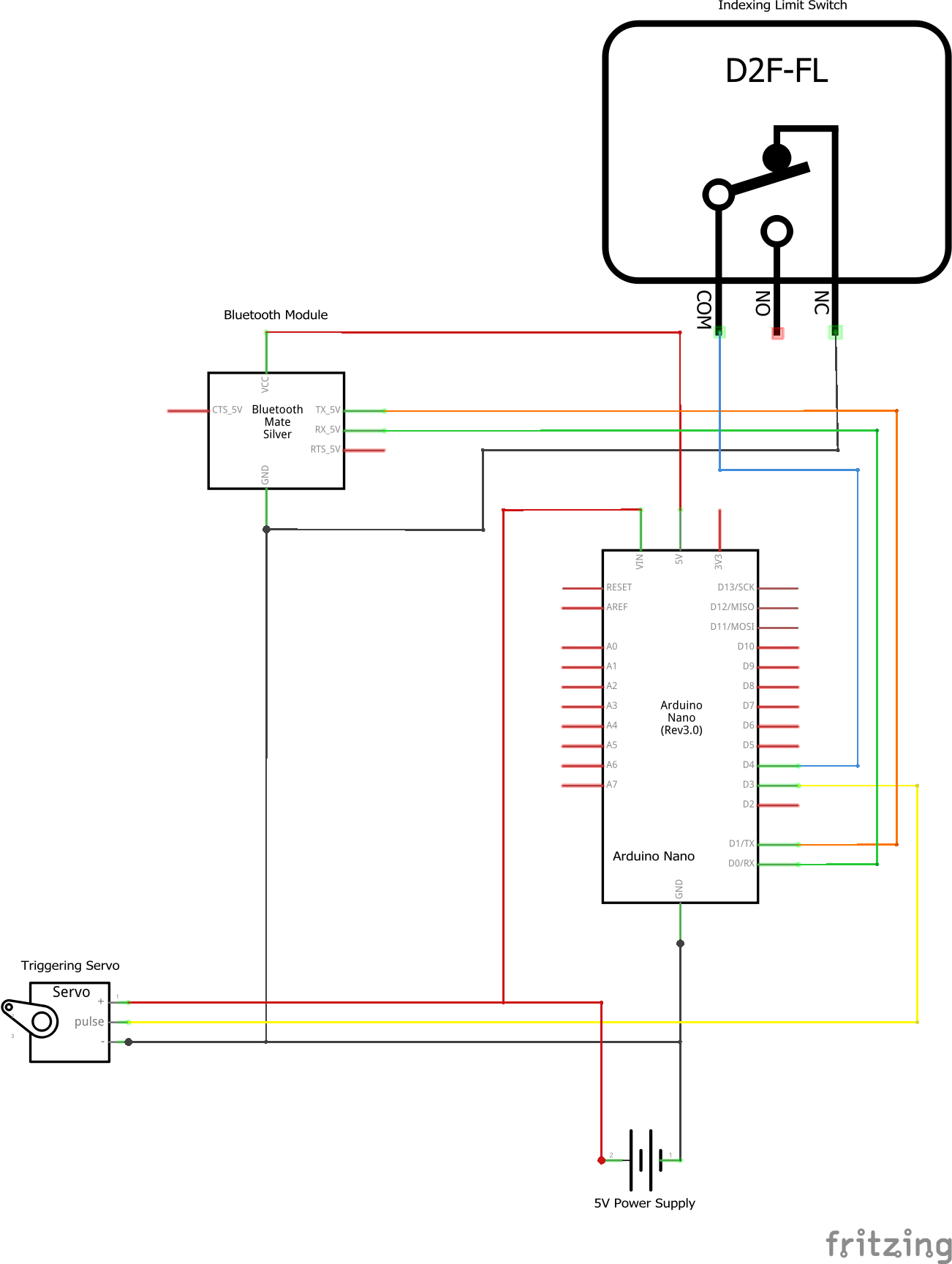 Download
For those unable to view the Fritzing file, here is the breadboard view. 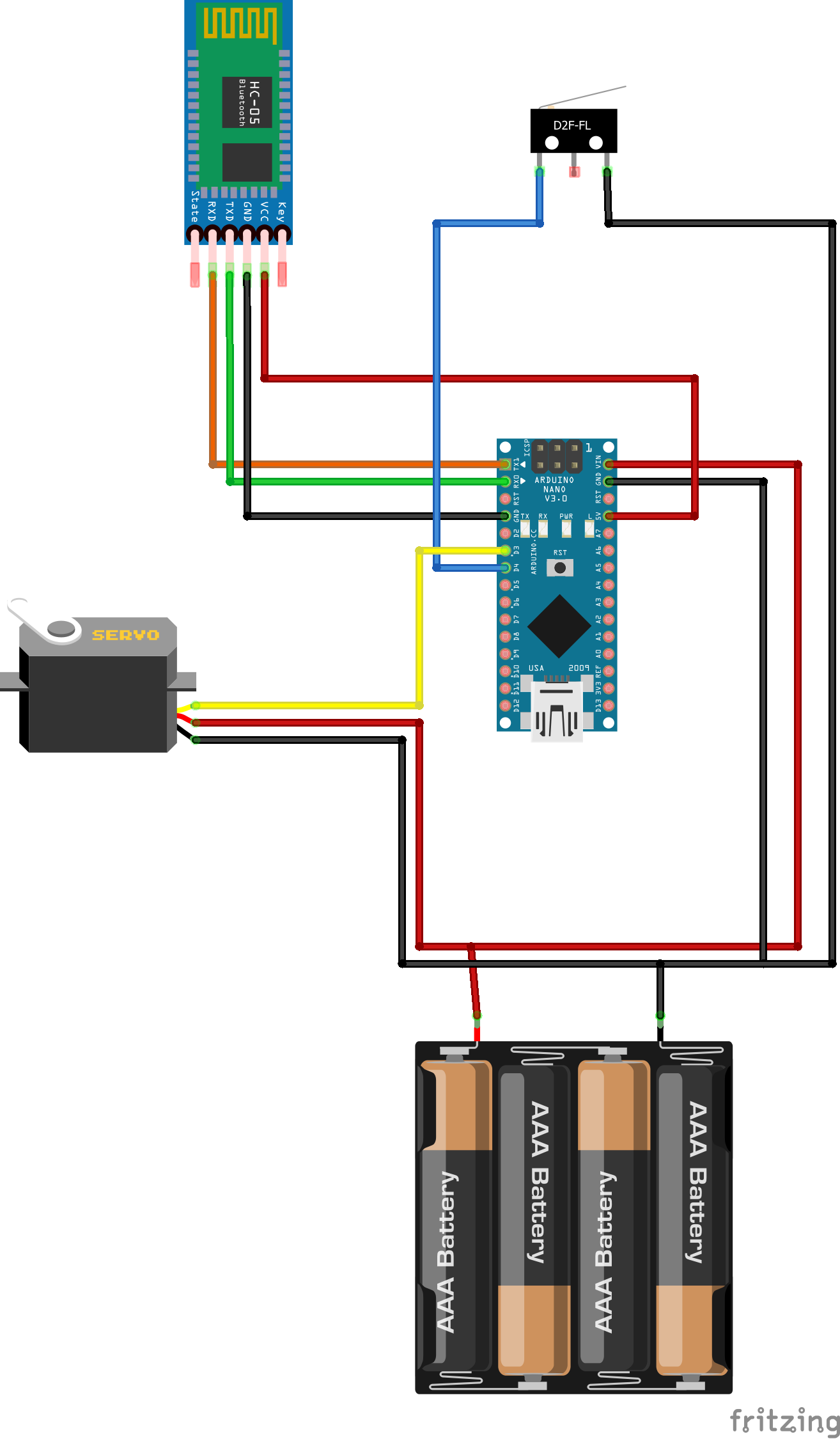 No longer fun for the kids, sat at the back of the toy bin, hopelessly dreaming of seeing the sunlight yet once more, the ROVER emerges...

A IoT system which helps you control your home lights from anywhere in the world in real time.

Control Lights with your Phone from Anywhere in the World!