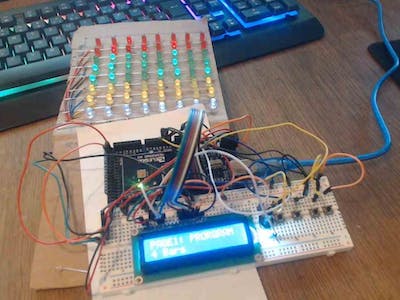 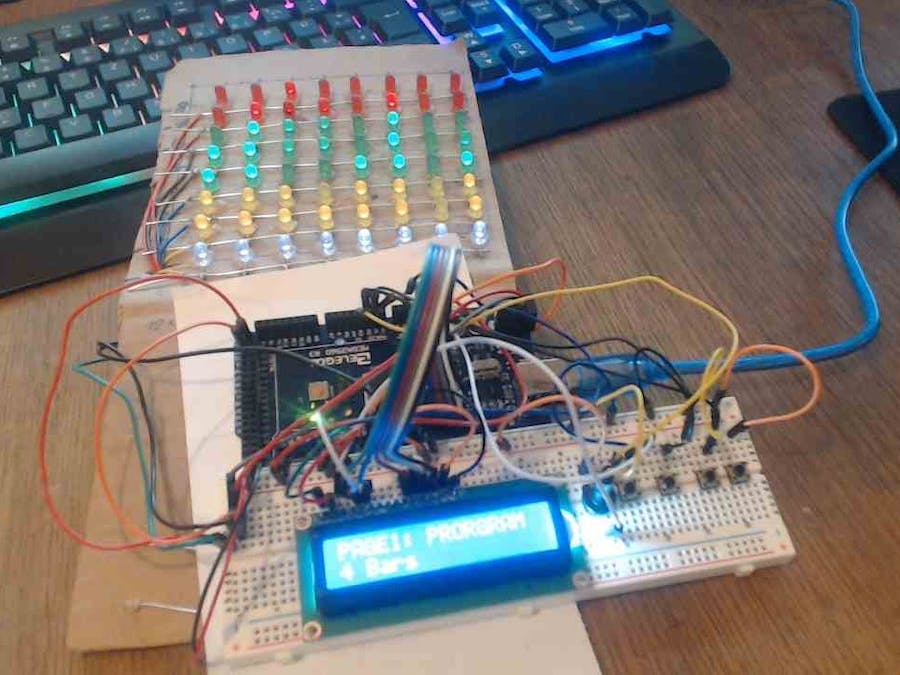 I was very excited when I first got Arduino strarter kit, after finished learning with the basics I decided that it is the time to make a project of my own.

I decided to start with some simple project, then go step by step with larger and advanced projects. I decided to make a simple Sound Specturm Analyzer with LEDs. There are chalenges to work out in order to make such a project:

This project is not about the specturm analyzer, I was working on solving the first challenge. I found so many ways and methods in the internet to acheive this, then this idea cames to me. I'm not sure if someone already did it this way... When it first worked, I decided to share it in the internet.

Anyway, this project is only about controling the LEDs. This is a first step of my upcoming specturm analyzer project (still working on it), the point here that:

Ok let's talk first about the idea and how it works.

We have of course 8 x 8 (64) LEDs arranged in 8 rows and 8 columns. Regardless of the LED color and voltage requirement of that LED, if one LED is connected to 5 V source with 220 Ohm resistor, it would work fine. But if we want to connect 8 LEDs with different colors and voltage requirements, it might not work with 5 v source. In this project, all 64 LEDs (regardless of the colors and voltage) can be light in one time without problem, and acts like it is one LED active!

For each row, all cathodes (- terminals) of LEDs are connected togather. That means we would have 8 termenals of cathodes (all minus of course) as rows.

For each column, all anodes (+ terminals) of LEDs are connected together. That means we would have 8 termenals of anodes (all positive of cource) as columns.

Let's connect the 8 cathodes (- termenals) with the output pins of a 74HC595 shift register. Let's call it (GNDs REGISTER).

Let's connect the 8 anodes (+ termenals) with the output pins of another 74HC595 shift register. Let's call it (VCC REGISTER).

Note that in this image the LEDs are connected wrongfully (i.e. cathods connected with anodes and verse versa), just keep in mind to connect the positive termenals of the LEDs with the VCC REG, and the negative terminals with GNDs REG. The LCD Display and the buttons are optional. I added them just to test the LEDs.

In order to light up the first LED of the matrix (row index 0, column index 0), then we need to shift out these values to our shift registers:

And yes, the GND REG register active in low, this mean we need to turn of an output and turn it on on the other shift register in order to make a LED work.

But, if we want to use this method in real time, we won't be able to control LED by LED. Because of we are controling rows and columns by simply shifting values into the shift registers (the previous example will light up all LEDs in the first column, and if the LEDs are not the same color or voltage requirement, it would not work at all). Thus, we need to find another way to work this out.

Thanks to Arduino fast processer and C programming language, we can acheive this easly by implemenitng a scan method.

First, let's take a look of this code:

This is the part of the source code when a full frame is rendered. And of course, we are going to use SPI for the shifting data !!:

Using SPI is not that complicated, all you need to do is to figure out the correct pins and connect them together. But, still, for SPI, we need to use these pins to do the data transfering: MOSI and SCK. Since we have 2 shift registers, i connected them like this:

- For each shift register, connect the Latch pin of it into a pin on Arduino.

- Connect all shift registers Data pins (Ds pin) together into one pin on Arduino, which it is pin 51 (or SPI MOSI)

- Connect all shift registers Clock pins together into one pin on Arduino, which it is pin 52 (or SPI SCK)

So, the only limitation to use shift registers in Arduino is the number of the pins on the board to handle the latch pins (beside the SPI MOSI and SCK of course).

For this project, i use ATMega2560, which pins are bit different from other boards <https://www.arduino.cc/en/Hacking/PinMapping2560>, you need to be carefull when connecting pins and figure out which pin is presented in which 'PORT'. Yes, i was confused, i read so much on the internet until i figured out that the PORT i need to use is PORTE to access PWM 2 and 3, not PORTD.

Note that I can use a loop for the rendering like this:

This is nicer and smaller (and simpler), I decided to go with the first one because of it maybe faster in c than using loop such as 'for'. Not sure about this, you can pick the one that suit your program if you don't care about performance. Or maybe I'm just wrong about this :)

LEDs[] is an array of 8 bytes. Each byte represent a row of LEDs. Each bit of the byte represents a led (in other words, the array is the rows, the bytes bits are the columns).

Let's say we want to light led of the 3rd row, 5th column:

All arduino have to do is to repeat this process in loop. After each frame (i.e. all rows are scanned and all columns are set), we can call some methods to update our LED array, and we can setup a delay so that the frame would last longer and thus making the show go slower.

Note that, as in tv, arduino must do the scan all the time. When you want to delay some frame, we can't simply use the delay() method, we need to work up another machanisim for this. I've done this simply by using a timer that count up each frame (i.e. all LEDs are sanned) then when it reaches a specific value, it call update methods to update the LED array then restart that timer. All these codes can be found within the source code included with this project.

The whole project is to test this method of controling LED matrix. I added some control buttons and an LCD display to show what's going on and control which way we want the LEDs light.

The page button cycles between 3 pages:

There are about 20 programs, each one test ability of the rendering, for example, a test will light up led by led, one led by a time, to see if the idea is working or not. Another will light up all 64 LEDs at once !! I tested power consuming and at acts like it is one led lighting.

This is just for testing, i am planning to make it better and include more features in it :D

Hope this project is useful, and sorry for my English. :-D

This is the full program. All you need is the render() method in order to render the leds, others are just for programs and modes.

Download
This is how we would make the project connections on bredboards. 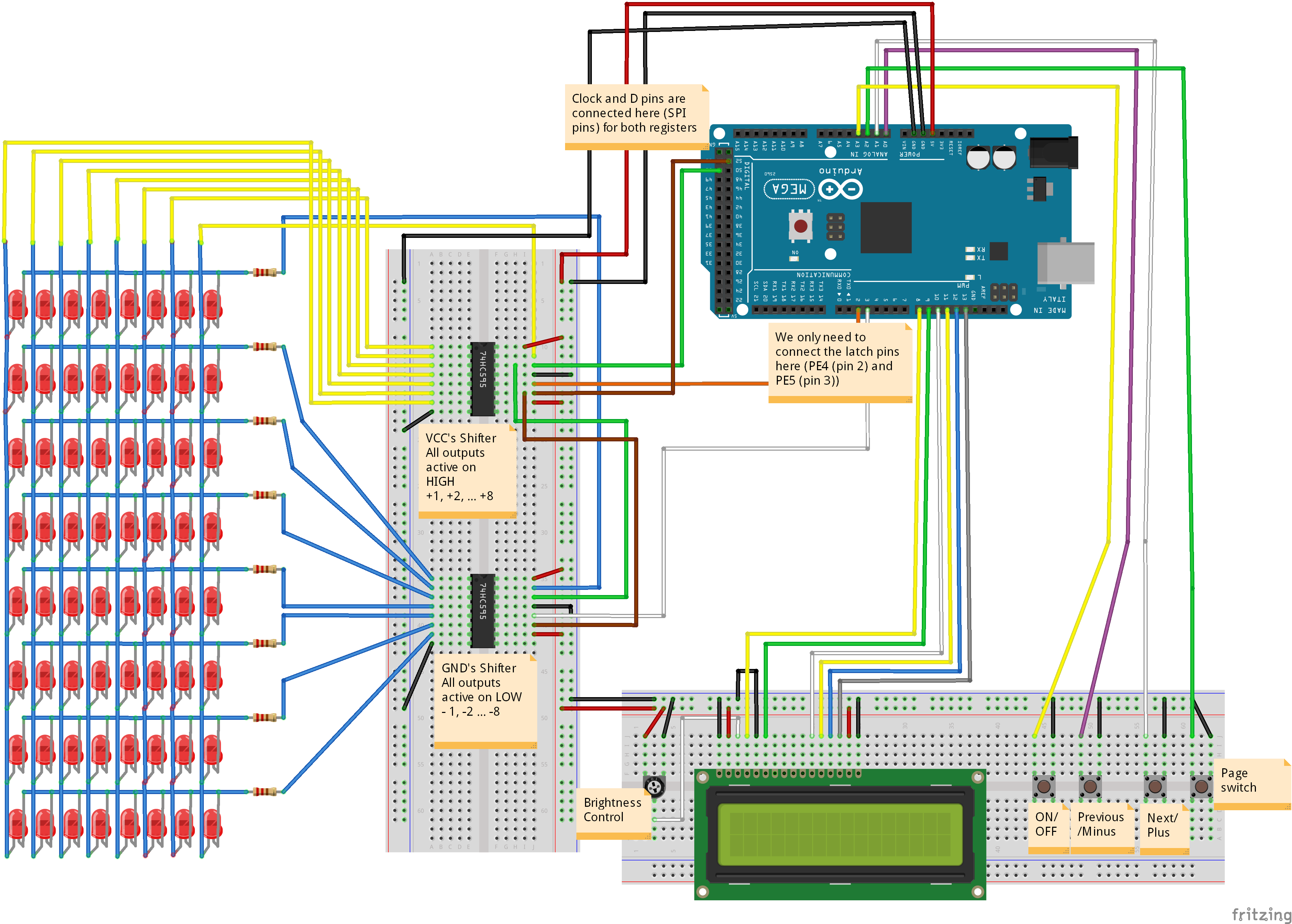 The project in fretzing project file.

Download
you can use fretzing to edit the project as you like using this saved project file.
8_x_8_leds_matrix_with_2_x_74hc595_ktbp6jfuah_PQCvGpyTK1.fzz