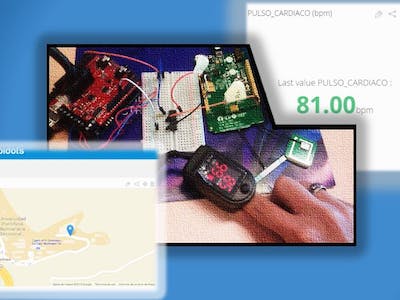 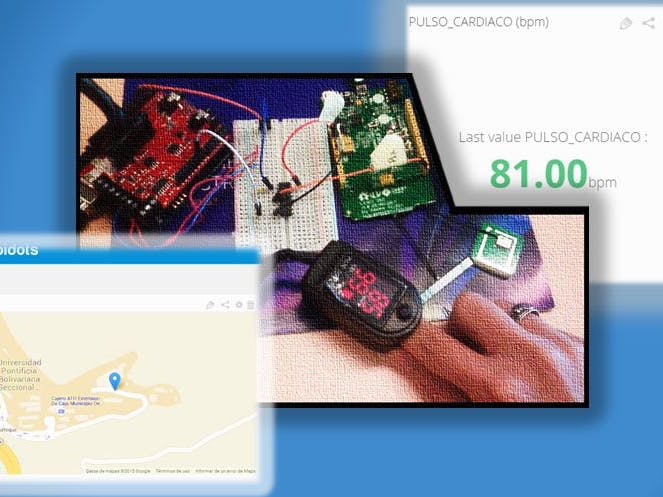 This project is the development of an e-health system for cardiac telemonitoring, using as monitoring system the development board LinkIt ONE, this one can be adapted to measure variables such as cardiac pulse, analyze it and through programmation determine if a person is having a heart attack, this information will activate an alarm that report to a person about the patient’s condition and its location, using the GPRS and GPS modules of the development board respectively. The LinkIt ONE can connect with the virtual platform UBIDOTS, to see the variable measured, the patient’s location and the alarms; keeping informed in all times to the person who cares the patient.

As is shown in the first figure, an Arduino uno is using to obtain the data of Beats per Minute (bpm), using a pulse-oximeter that is connect to the e-health sensor platform to coupling the pulse-oximeter to the Arduino and obtain the Data. The LinkIt One is used as a monitoring system and also to post the data to UBIDOTS, here the data is visualized in a map to the GPS position and a numeric indicator to the beats per minute, also the events to alert about a person is having a cardiac attack, are created in UBIDOTS.

All the develop of this project is show in this document.

I. PROBLEM TO SOLVE

Actually there are some devices that help people with increased risk of cardiac infarct or who had prior cardiac events, such as the pacemaker, this one detects when the heart rate decreases at a too low rate, sending to the heart a stimulation signal according to a programmed frequency, until the heart beat again at a normal rate [1]; Devices like this are needed in critical cases, in which symptoms of bradycardia are detected, that is when the heart takes on a slower rhythm of heartbeats [2], this technology helps to prevent potentially fatal events, but the patient involved is who should call to the health center or any person who could help him, considering that for the patient may not always is easy make this things, this work proposes to develop an e-health prototype system for cardiac telemonitoring, that will be portable, economical and reliable.

This project is focus on diagnosing if a person is having a cardiac infarct and if so, notify immediately to anyone who has a close relationship with the person; to develop this system, the LinkIt ONE board of MediaTek company and the e-health sensor platform for Arduino UNO were used.

Some important features of the LinkIt ONE development board are that is programmed in the same way than an Arduino, also has modules of Global Position System (GPS) and WiFi communication[3], which will allows get the current location of the person at the time to have some form of cardiac arrhythmia and communicate this information through the network; as the development card enables communication with web tools, can be stored in the cloud the patient information, monitored variables, such as cardiac pulse; and generate alarms; the virtual platform that can handle this information is UBIDOTS, which is a company that provides cloud services for storing and making a basic analysis of information of variables measured in real time.

This is the first step to develop the project; for this section, the materials needed are a LinkIt ONE and the WiFi Antenna, as is shown in the next figure.

The second "OK" next to the "Connecting to site..." indicates that we have a wifi communication.

b. OBTAIN THE GPS INFORMATION

The second step was obtain the GPS latitude and longitude coordinates, to this section, I use as a guide the code in the UBIDOTS tutorials to post GPS information (http://ubidots.com/docs/devices/linkitone.html), the modificate code is in the section of attachments of this article, called "GPS AND PULSEOXIMETER".

The first part of the code "GPS AND PULSEOXIMETER" is to obtain the lecture of the pulse-oximeter sensor, this sensor provide the beats per minute (bpm), that will post in UBIDOTS.

The second part of the code is to obtain the latitude and longitude of GPS. The code has a detailed explanation.

The code to post data to UBIDOTS is shown in the next figure.

Is important to notice that this is the code to post GPS data, and it has two variables to post (latitude and longitude), to send this data to UBIDOTS, is necessary use the "context" as is shown in the figure; in case that the data be just one value, it is send with the first part of the "String data" as is shown in the next figure.

This is the code to post the pulse-oximeter data, you can notice that the "String data" just have the part of value to post the data.

The results of data posted in UBIDOTS are show in the next figures.

d. CREATE AN EVENT IN UBIDOTS

To create an event in the UBIDOTS platform, is necessary following the steps as is shown in the next sequence.

First: You have to choose a Data Source, in this case I called "Monitoreo"

Second: Select the variable that will determinate when the execute the event

Third: Give the condition to the event, in this case the event is executing when the "PULSO_CARDIACO" is greater than 170 bpm, this condition means that a person is having a cardiac attack.

Fourth: Choose the way to communicate that an event is been executing, in this case I send a SMS to a cell-phone to communicate that the person is having a cardiac attack and I send the link when the person could see the GPS position of the patient in the map, as is show in the figure of the section "Posting data to UBIDOTS"

Actually the results obtained are that I can post the GPS and Cardiac Pulse data in UBIDOTS and it can be visualized as is show in the next figure.

With the data in UBIDOTS, were created two important events, the first is when the cardiac pulse is less than 30 bpm and the second is when the cardiac pulse is greater than 170 bpm; in both cases it indicates that the person who will have the dispositive for cardiac telemonitoring is having a cardiac attack and need help, so UBIDOTS generate an alarm message that is send by sms to a cell-phone.

Actually the prototype is no portable and is limited by the wifi signal, if a person is out of wifi coverage, the dispositive will not send new data.

This is the code to obtain de GPS coordinates and to communicate the
Link It ONE to the e-health card for Arduino UNO to obtain the cardiac pulse signal.
This data is send and posted in UBIDOTS

This is the code to connect by wifi to a network

This code is to obtain the pulse-oximeter data and send
it to a serial port created, called "Serial1" to the LinkIt ONE

Download
This image shows all the devices used and how they should be connected, the board circuit is only a CMOS connected as buffer to make that the maximum output voltage of the Arduino is not greater than 3.3v. 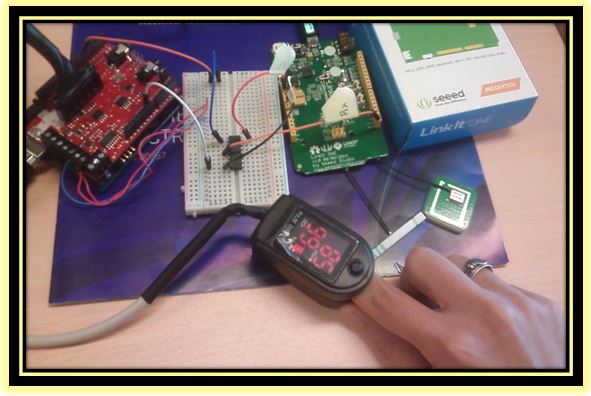 A heart rate monitoring system that tracks your heart beat in "BMP" but I made a little difference by adding some LabView Visualisations.

Heart attack is killing over 375,000 Americans every year. and this project wants to stop this.