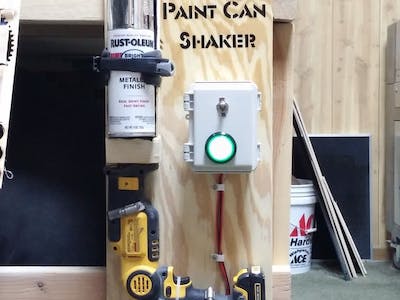 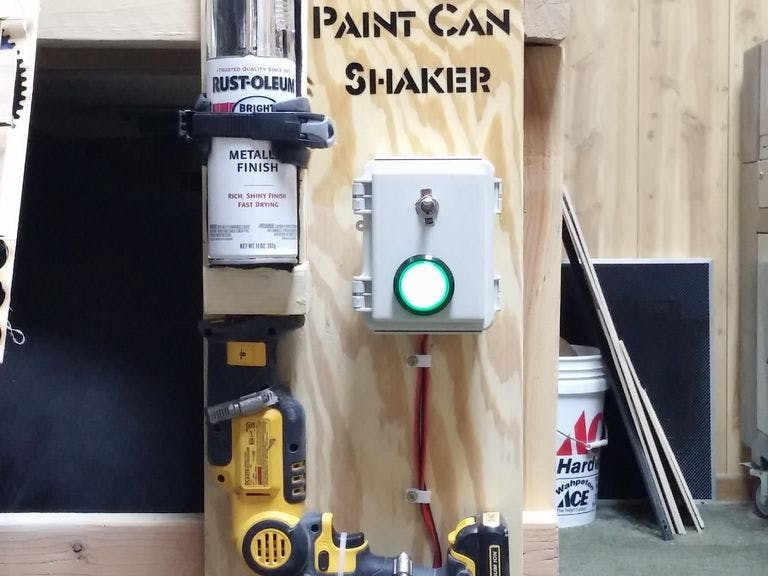 I have a little paint booth in my shop, I use it to paint different projects that I am working on. One of the things that I hate is having to shake all of the paint cans. I am often painting with 5 or 6 colors at a time, and that equates to lots of sitting around shaking cans. I wanted to make a machine that I could put a spray can in and it would shake it for me. Simple as that. The following are the steps that I used to make my Dewalt Spray Can Shaker.

This is a list of the parts, tools, and materials that I used to make this project.

So the Arduino part is really easy. I needed an Arduino Nano to be powered from the Dewalt 12v battery. It will trigger a relay for a set amount of time every time a momentary switch is pressed.

When the D6 pin switches high, it will trigger the relay. In order for the relay to turn on the saw I will take the positive from the battery and cut it and run it through the relay. The relay has 3 places to connect to on the working side. There is the NC (normally closed), the NO (normally open), and the Common. I have two wires that need to be connected, one is the positive wire coming from the battery and the other is the positive wire going into the saw. One will be connected to the Common screw hole, and the other will be connected to the Normally Open Screw Hole. That way when the relay is triggered it will turn the saw on.

In order for the paint shaker to work the way I wanted it to I need to modify the saw a little. I need to be able to tap into the 12v from the battery. I also need to clip the positive wire going into the saw from the battery holder and extend and run those wires into the relay. I took some wires and soldered them onto the battery clips for the positive and negative. I drilled a hole in the side of the handle so that I could run the wires out of the hole and into the other electronics. Once the set of wires going to the battery clips, and the set of wires that will go to the relay were through he hole I put the saw back together.

The saw blade that I used was just an old sawsall blade that was dull. I took a grinder and ground off all of the blade tines and then drilled 3 holes into the blade.

Now I needed to get all of the electronics and the saw and spray can contraption all mounted to a board. I started by laying it all out on a piece of plywood and deciding how big I wanted the base to be. Once I knew how big to cut the base, I cut it out of some 3/8in plywood scrap I had. Next I drilled holes in the hose clamps and screwed them into the plywood base. The hose clamps will hold the saw to the base. Now I put the saw into the hose clamps and tightened them down.

Now I knew where the slide was going to end up I needed to make a spot for the blade to attach. I put the blade in and ran the drawer slide where it was going to go, then I traced the blade onto the carriage with a pencil. Then I once again took the drawer slide apart and used a chisel and hammer to chisel down the area where the blade will sit. This is so that I can add the top pieces of the carriage to it with out issue. I screwed down the blade into the area that I had chiseled out. Then I started adding the parts that I had cut earlier to create the "can carriage". I started with the end caps and moved on to the side pieces. If the piece went over a screw from the blade then I chiseled out a little so that the piece would fit flush. Once I had all of the wood pieces where they went, I glued and countersunk / screwed it all down.

Now I had the "can carriage" built. I wanted the inside of the carriage to be grippy, so I painted it with several coats of Plati-Dip.

Next I cut apart the rollerblade for the buckle. The buckle was curved pretty bad so I used a small torch to heat it up and bent it straight and let it cool. I trimmed the buckles to the size I wanted and screwed them to the sides so that when closed it would hold the can in the carriage.

To install the electronics I just screwed the project box that I chose to use down to the frame. I drilled a few holes into it for the wires, the momentary switch, and the toggle switch. Then I soldered the wires for the power and hooked up the relay.

So it is all done but I wanted to add a finishing touch. I printed off a Dewalt logo on a color printer and cut it out with my scalpel. Then I added some lettering that I cut out with my vinyl cutter. I put a coat of Mod Podge down and stuck the Dewalt logo to it. Then I put another layer of Mod Podge over both the logo and the lettering- just to seal it. Now it looks right. All done.

It is all done. I screwed it to the side of my bench that is next to my paint booth. It runs great. Thanks for taking the time to read my tutorial. 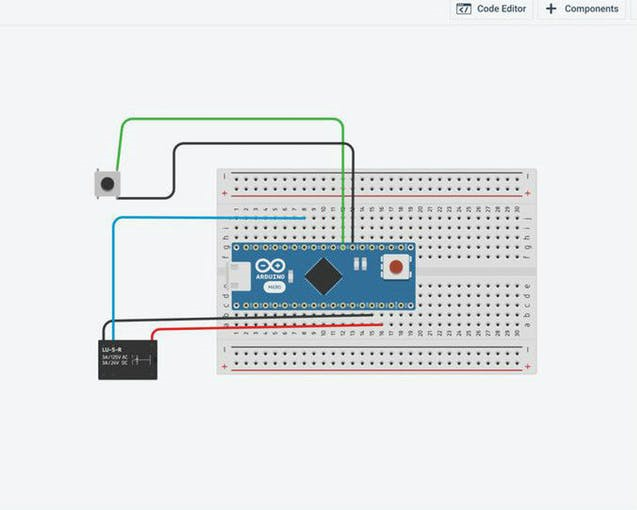 It's a dimmer switch! Create your own touch interface for controlling your Philips Hue lights using Bare Conductive's conductive paint.

Paint Your Dimmer Switch on the Wall