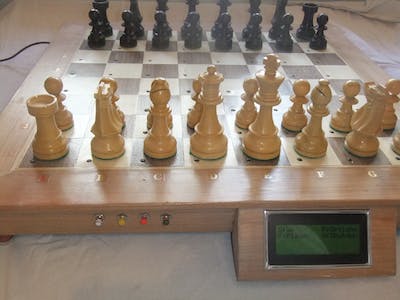 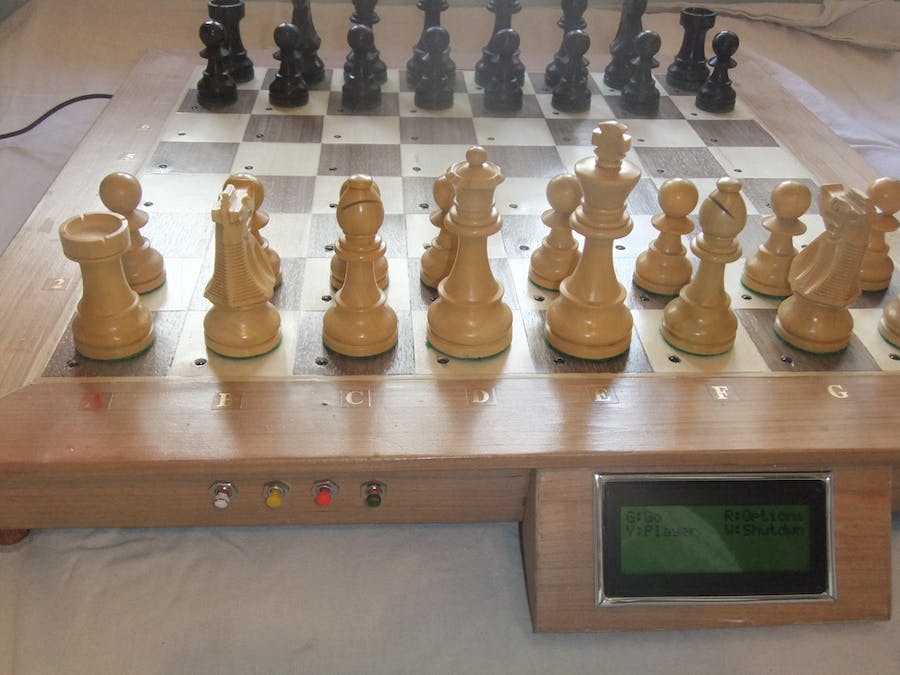 This site describes a fully working chess computer that recognises piece positions using reed switches and signals its move using a LED on each square.

It runs from an Arduino which controls the board, connected to a Raspberry PI which runs the chess engine Stockfish and a chess rules library called Chessboard. It is completely self contained, just plug it in, press the green button and you are playing.

The next few pages explain how it works, there are two parts:

Harware: electronics and the board

Software: The programs that drive it

Why an Arduino and a Rapberry PI?

An Arduino is great for real time control of the devices on the chess board, but it does not use a conventional operating system like Unix/Debian/Raspian. Therefore Stockfish and most other strong chess engines won’t run on it. I believe there are a few chess engines that do run on Arduino http://chessprogramming.wikispaces.com/Arduino  , but they will not be as strong as Stockfish.

My interest in building chess computers started with Arduino and at the time the Raspberry Pi had not been released. Six months later it was and I realized I needed a different computer so I added the Raspberry Pi to run the engine.

If I was starting again today I would just use just the Raspberry PI with no Arduino,  and I explain how you would get it to control the board here.  However now that I have a great board that I can barely beat on level 3 out of 21, I have no reason to build another one.

I see that some people are designing robot arm playing chess computers, that sounds really cool. In that case I would use an Arduino to control the arm, board sensors etc and use a Raspberry Pi to run the chess engine.

Why the Stockfish Chess Engine?

“I know what you’re thinking, punk. You’re thinking “is it mate in six moves or only five?” Now to tell you the truth I forgot myself in all this excitement. But being this is a 64 bit Stockfish, the most powerful chess engine in the world and will blow you defence clean off, you’ve gotta ask yourself a question: “Do I feel lucky?” Well, do ya, punk?”

Original inspiration from these sites:

Which set me off building a USB chessboard for connection to a PC based computer program. After that the next step was to build a complete chess computer.

For more details on this project go to:

Project in progress by Automaters

Project in progress by Paul Langdon