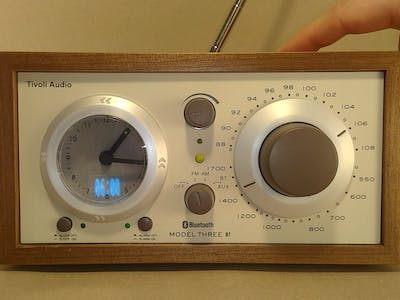 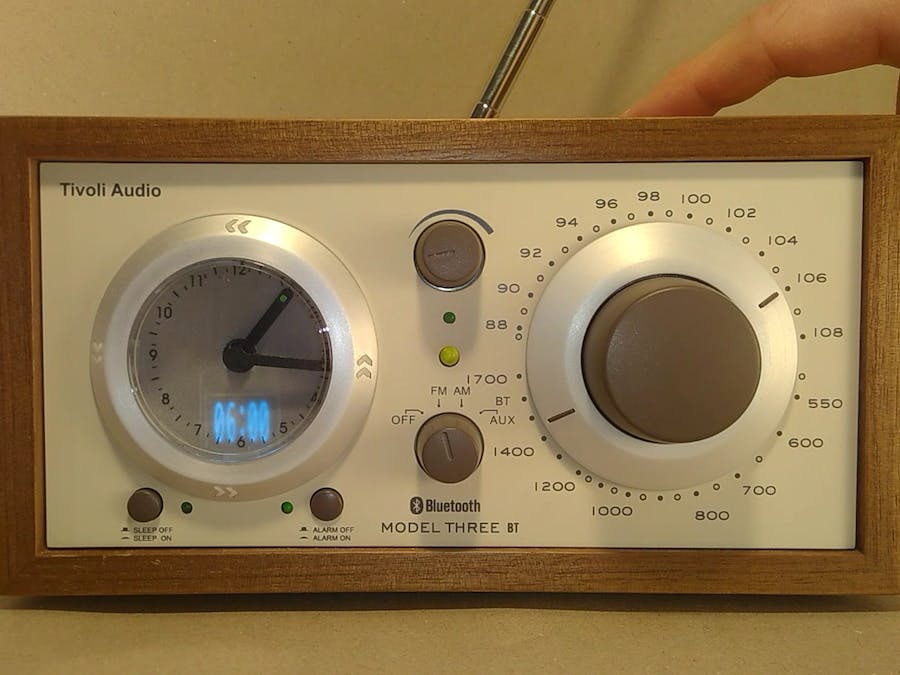 This radio alarm clock has amazing sound given its size and works as a Bluetooth speaker as well. However, there are some issues that come with it:

And that is pretty much what the reviews say as well. In my case, I also encountered problems with the alarm going off in the middle of the night.

For setting an analog clock, I learned that the difficulty is to know which time the clock's hands are showing. One way to solve this when setting the clock after a restart, is to find a reference position like 12:00 and then count the steps onwards.

To set an exact alarm time, I decided to use the radio's snooze button and a display hidden behind the clock's face.

My first attempt was to use the original clock movement and add a "backpack" with an Arduino Nano, the Micro OLED and a DCF 77 receiver to get the exact time. Unfortunately, the reception of the DCF signal was insufficient once the components were put into the housing with all the wires from the radio around them. Also, I couldn't detect a reference position of the clock's hands by using the original movement's alarm. As mentioned above, the alarm going off at different times was part of the problem in the first place.

With a project that is always indoor, but especially after the Arduino IoT Cloud Public Beta was announced in February 2019, I decided to include WiFi connectivity to get the exact time.

What was then left to solve was finding a reference position of the clock's hands. Several attempts with hall sensors/magnetometers and magnets on the hands were ok but didn't quite achieve a result that would meet my expectations in terms of accuracy and repeatability. Thankfully, I received a sample of a clock stepper motor with an optoelectronic coupler integrated for reference detection after contacting manufacturers directly.

Once the reference position is detected, the minute hand will halt for a moment

Finally, after the Arduino Nano 33 IoT was announced in May 2019, I replaced the MKR WiFi 1010 in my prototype with the Nano and its smaller form factor.

The alarm time (hour and minute) can be set using the snooze button or via the dashboard as claimed in the pitch.

This is my first hobby project with 3D-printed parts and my first ever custom PCB. Being a beginner to PCB design, Fritzing's easy to use PCB feature was very helpful.