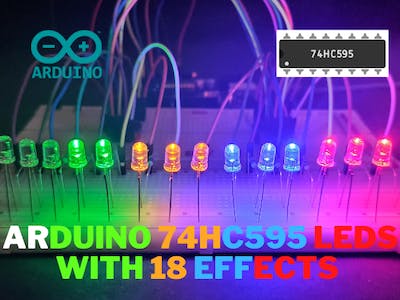 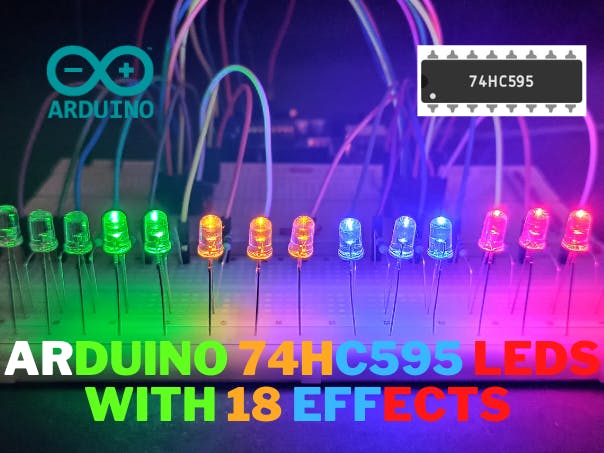 Control 8 leds.Control leds brightness. Control 2 shiftRegister with led effects. I will explain coding too. Visit my website for more tutorials.

5. Breadboards to build the circuit on it.

If you want to learn how shift register work? Click on this Link

After that, attach the LEDs one by one and make sure that the led GND pin is connected to the ground side of the breadboard and, also don't forget to add a 220 ohms resistor to protect the led from high current.

Now attach the shift register on a breadboard.

After that, connect the output pin of shiftRegister to the LEDs.

Connect all the LEDs one by one up to ShiftRegister pin 7.

After that, connect the positive side of the breadboard to the Arduino 5v pin.

Next, connect the negative side of the breadboard to the Arduino GND pin.

Now the circuit is complete let jump to the coding part.

Plug your Arduino into your computer and upload the code.

First, we have to define the controller pin of the shiftRegister.

The latch is connected to Arduino pin 3.

The data pin is connected to Arduino pin 4.

byte leds = 0; Its hold the location of led is turned on or off.

In void setup() now Set all pins of shiftRegister as OUTPUT

updateShiftRegisterR(); This function is used to update the shiftRegister we define below.

First, we have to set the latch pin low means No update.

After that call, the Arduino function shiftOut().

Shifts out a byte of LEDs one bit at a time to the serial data pin after the clock pin goes high to low and the led bit is store in shiftRegister.

Now we have a location of which led is turn on so set the latch pin high means to update the outputs.

Wait for half a second. for loop to count from 0 to 7.

bitSet(); Its Arduino function to Sets a bit of particular LEDs at the location I too high.

Now update the ShiftRegister and wait a half sec.

The process is repeating, and one by one led is turned on.

The led is start turning on from the Right to left direction.

There is a way to control the led brightness.

We can send the PWM signal to the shift register OE pin via Arduino PWM pin.

The code is a little bit the same.

Define the OE pin is connected to Arduino pin 5.

In void setup() now Set the OE pins as OUTPUT.

In void loop() Set all the led as high or turn on.

Update the shiftRegister and Wait a half sec.

analogWrite() function is used to send the PWM signal into OE for controlling the led brightness.

Upload the code Now you will see the led brightness is increasing.

All the connections are the same as before the change is we are using two shift registers.

Next, connect shiftRegister pin 14 to pin 9.

After that, connect the Arduino to shiftRegister.

Now, deliver the 5v to the breadboard via an Arduino.

Next connect the output pin to leds

Connect your arduino into the computer and upload the code.

Understand the 74HC595 working, its application of adding infinite GPIO pins to your projects. This is pretty cool huh?

This project demonstrates the working with Shift Register.