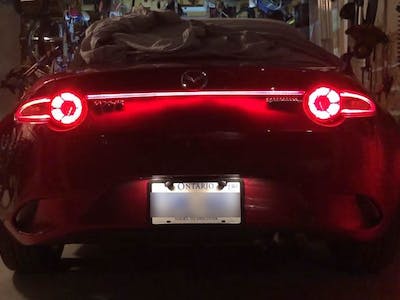 Watch as the NeoPixel LEDs dance...

Project in progress by PlastiBots.com 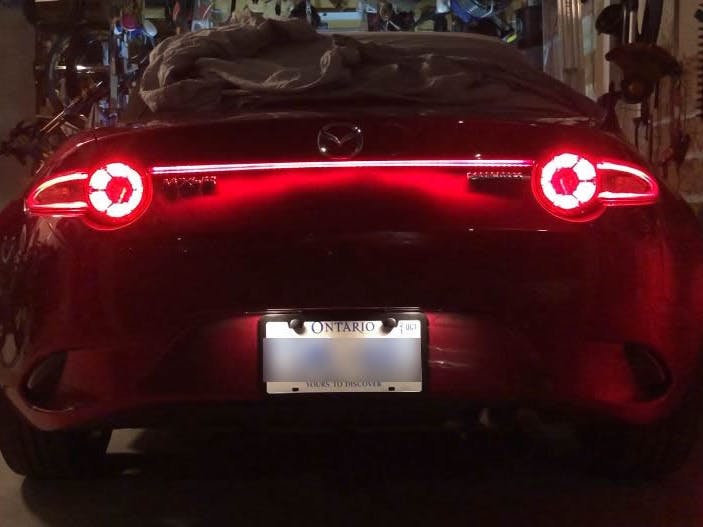 Watch as the NeoPixel LEDs dance...

It’s only been a few weeks since I’ve had my new 2021 Mazda Miata MX-5. Already added sequential LED turn signals & side markers all around, but not being the type to leave well enough alone, I needed a little spice to make it my own. Combining that with my passion of microcontrollers and LEDs ( see similar ) and taking inspiration from others before me (this) , here’s what I ended up with. Granted it’s a bit over-the-top but good news is that I can control the features via a mode button on the controller. For most up-to-date details with code, visit my blog: www.plastibots.com

The heart is an Arduino Nano microcontroller with an Adafruit NeoPixel RGB LED light strip. The controller takes 12V power from the rear parking light, GND and 12V signal from the brake lights (when applied). When the car starts, parking gets power which fires up the controller/LEDs with a “bouncy” LED sequence intro on car start. For the rest of the time, the lights remain on as running lights while the controller monitors the brake signal. When brakes are applied, the LEDs sweep outwards in brake mode. The controller has a mode button so I can turn features (the “bouncy” bit) on/off (see future thoughts further down).

As this is a NeoPixel RGB LED colour strip each LED (90) can be individually controlled with millions of colours (and brightness control). In this case, I’m only using red and varying brightness. The entire system can all be tweaked via code using the Arduino Nano. This way I can change it up later if I get bored or get new ideas.

I decided to mount the LEDs under the trunk LID as I think it provides nicer lighting. To get the 12V, GND and 12V brake signal, I tapped into the extension cable that came with the sequential turn signal kit. I understand you can also get something similar from mx5things. See pictures for controller box placement and cable runs. Those who have been there before can attest it’s nearly impossible to glue the LED strips cased in silicone. Instead, I custom modeled and 3D printed my own clips to fit ths specific LED (tiny side mounted). Then popped some double-sided tape on them and bam ready to go. I had to iterate a few times as my first design caused shadows to be cast by LEDs near the clips. I came up with something that works by having the clip area set back (see pic) and not interfere the LED cast area. Note the LEDs are side-facing (light casts to the bottom of the picture). The top part of the clip stops ahead of that point, so no shadows!

In all this was a pretty straight forward build. However, I had a few challenges. I do most of my 3D printing with PLA-based material. Problem is things like double-sided tape don’t stick well to it. It holds, but over time slowly comes away – which is a bit of a problem as the LED strip will start to come loose. I think the tape I have is not the highest of quality, so will seek out some 3M. I’m going to try a few things and report back with updates. Upon finishing the project, I showed my wife and she laughed at the bouncy pattern, but the next words out of her mouth was “I want KITT, gotta have KITT… giggles”, so off I went and integrated a KITT feature. However, the challenge I now see is I expect I’ll want a few other modes/patterns. I will have to write the code, but it would be nice to be able to switch between them using my phone instead of re-programming each time. I want to do things on the fly (not while driving of course…) See the next section for more on that.

Here are some ideas of future mods I’m thinking of doing:

As changes may have occurred since this was posted, check my blog for updated info. www.plastibots.com