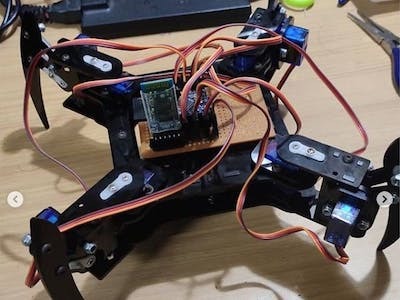 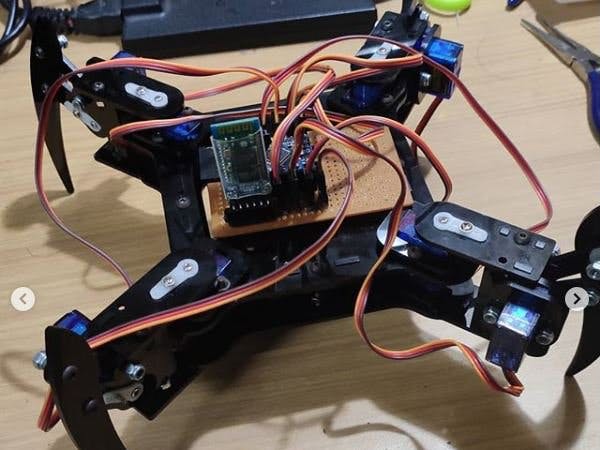 Description : This is a cool quadruped which can walk, exercise and dance. how cool is that!? :) This Robot a special type of algorithm for its walking which I will explain in detail below. But before that lets talk about difference between statically and dynamically stable gaits.

In case of quadrupeds such as animals ; they use movements of the head and tail to move the COG back and forth to keep it within Stability Triangle.

2.Trot Gait: Its sometimes called amble gait. Two diagonal legs swings forward while the other two support the body and move backward(as if the body is moving forward. Its one of the quickest gaits because two of its legs are lifted at one time. The stability of the body is related to the frequency of the legs lifted and placed. Quicker the placement the less shaky you will find it is. Make sure the feet have a large contact which will help it stay better while the other two legs are lifted.

3.Crawl Gait: This is similar to the first gait but in this one COG shifts while walking to maintain a better stability. To do that we need to know which leg is going to be lifted and placed forward and the other three legs will form a supporting tripod.To stay stable the robot has to be inside the COG Triangle.

1. (From left side)This is the starting position, with two legs extended out on one side, and the other two legs pulled inward.

2. The top-right leg lifts up and reaches out, far ahead of the robot.

3. All the legs shift backward, moving the body forward.

4. The back-left leg lifts and steps forward alongside the body. This position is the mirror image of the starting position.

5. The top-left leg lifts and reaches out, far ahead of the robot.

6. Again, all the legs shift backward, moving the body forward.

7. The back-right leg lifts and steps back into the body, bringing us back to the starting position.

Notice that at all times, the triangle formed by the legs on the ground contains the CoG. This is the essence of the creep gait. When we look at this pattern, we can see it is essentially two sets of mirrored movements. Step, step and shift, followed by another step, step and shift on the other side. Here is the code snippet for it:)

Note: My code may or may not work you. why? Because COG depends upon the weight and type of the body of the robot!. Yours chasis may be different. Tweak the Arduino code and Inverse Kinematics (IK) accordingly.

Note :I have taken this algorithm step by step and some of information from Make magzine's official website https://makezine.com/2016/11/22/robot-quadruped-arduino-program/ check this link to find out more !

Note : There are variations for Quadruped Robots. I have used 8 Motor Quadruped. So inverse Kinematics of 2 DOF is required here not 3.

Video: Check out the working Video of my Robot here :)

A spider-like robot based on Arduino.