When I saw the infinity mirror effect for the first time, I was impressed with it.

I wanted to build my own version of it, and so, I decided to use Infineon's 3D magnetic sensor kit with the rotator knob to control colors on an infinity mirror with an RGB LED strip.

Before proceeding to the actual build, make sure to check out this demonstration video of the final product:

Note: The infinity effect is not visible that much; due to the camera and also I need to experiment with the placement of the mirrors to make it more pronounced.

These are the parts needed to build it (only the electronics):

Because the 3D Magnetic 2Go kit doesn't have enough PWM pins, I used the Arduino MKR1000 board along with that so that I could easily add anything else to the infinity mirror.

Other than that, the color changing algorithm works by converting the RGB values (from 0 to 255) to HSV (Hue Saturation Value) where changing the value of hue from 0 to 360 will change the color of the LED.

Note: I didn't write the code for this conversion from HSVtoRGB. After searching online, I found the code from this website here. Therefore, I used the algorithm modified it to work with the 3D Magnetic 2Go kit.

This is the code snippet for the conversion:

Below is a summary of how the whole project works:

That being said, let's move on to the project itself.

This is the rotator knob attached to the kit:

And this is the pin-out of the kit:

Assuming you know the basics like how to upload code and have already set-up the kit to receive sketches from the Arduino IDE, this step will be very easy.

Select the right board and COM port and set "Serial Output Selection" to "PC". Once done, upload the code and open the serial monitor. You should see a number like this from 0 to 360, which changes by rotating the knob:

If you do, it means everything is okay, upload the same code again, but this time, set "Serial Output Selection" to "On Board", and make sure it is uploaded properly.

Now you won't see any output in the Serial Monitor, this is perfectly okay, just move on to the next step.

And this is the pin-out of the MKR1000 for your reference:

Connecting Everything and Testing

If board is powered through 3.3v pin, it is not recommended to power through USB and vice versa

This is how they should look:

Note: I would recommend that you first build all of the electronics part, and when it works perfectly, then move on tobuilding the infinity mirror itself.

If you want to test if the connection between the MKR1000 and the 3D magnetic sensor kit is okay, connect the MKR1000 to your computer's USB port, open the serial monitor at 9600 bauds. You should see this:

What is happening is that the 3D Magnetic Sensor kit is sending the angle the knob is on (from 0 to 360 degrees), and the MKR1000 parses that angle and converts it into the RGB color codes (from 0 to 255 each), looping through all colors. Rotate the knob and see the values change.

Now it is time to wire up the transistors to the MKR1000. Use this connection diagram:

Note: I am using the common anode type RGB LED strip, and this article on Adafruit was very helpful on setting it up.

I wired up the transistors on a separate small breadboard:

So after connecting everything up:

Rotate the knob and see the color change:

A video of the color changing LED strip with the knob, looping through all the colors:

Now that you are done with the electronics and are able to change the color on the RGB LED strip, we move on to making the infinity mirror itself.

I won't be going into much detail on this because I'm no expert; it was my first time making something like this, but still the end result wasn't that bad. Again, I saw this video on YouTube, and it really helped me in building it.

These are a few images of how I built it, just to make you understand the concept.

I already had this wooden frame which I used as a frame for exposure when making PCBs, and it appeared to work much better as an infinity mirror:

The frame also has this clear glass which can be removed:

I applied this car window tint (which I got from an auto shop) to the glass using soapy water and a card for pressing out the bubbles.

Then I glued the RGB LED strip in at the side of the frame, behind the tinted glass:

And soldered wires to the strip and took them out through a one of the holes in the mirror, to allow the back mirror (which will be installed later) to sit flat with the frame:

Testing the LED strip, after attaching it to the frame (without the mirror at the back):

Now for another completely reflective mirror, which goes at the back of the frame, but because I don't have that at the moment, I just placed the frame (complete with the RGB LED strip attached) in front of a dressing table mirror to check. Finally changing the color of the infinity mirror using the 3D Magnetic Sensor knob:

So now you are able to change the color of an RGB LED strip using the rotator knob and Arduino MKR1000. You can easily alter the code in the XMC2Go to change another RGB LED's color but when the switch is pressed, and you could add a lot more too. You could even the same rotator knob to dim or brighten another LED, with simple changes in the code.

I couldn't find an RGB LED strip which has multicolor LEDs; the one I found has separate red, green and blue LEDs. Using an RGB LED Strip with multicolor LEDs would give a much more pronounced color change, so if you find those, they would look even better.

Another thing as anyone can point out, instead of an infinity mirror, you could use this in anything you can think of. It could be lighting for your car trunk, bike or scooter, or lighting for your table such as this:

Make sure to comment with your ideas and opinions about the project.

Upload this code to the Arduino MKR1000, and connect everything according to the connection diagram (after uploading the code to the XMC2Go)

Download
Upload the codes to the 3D Magnetic sensor kit and the MKR1000, and connect everything according to this diagram. 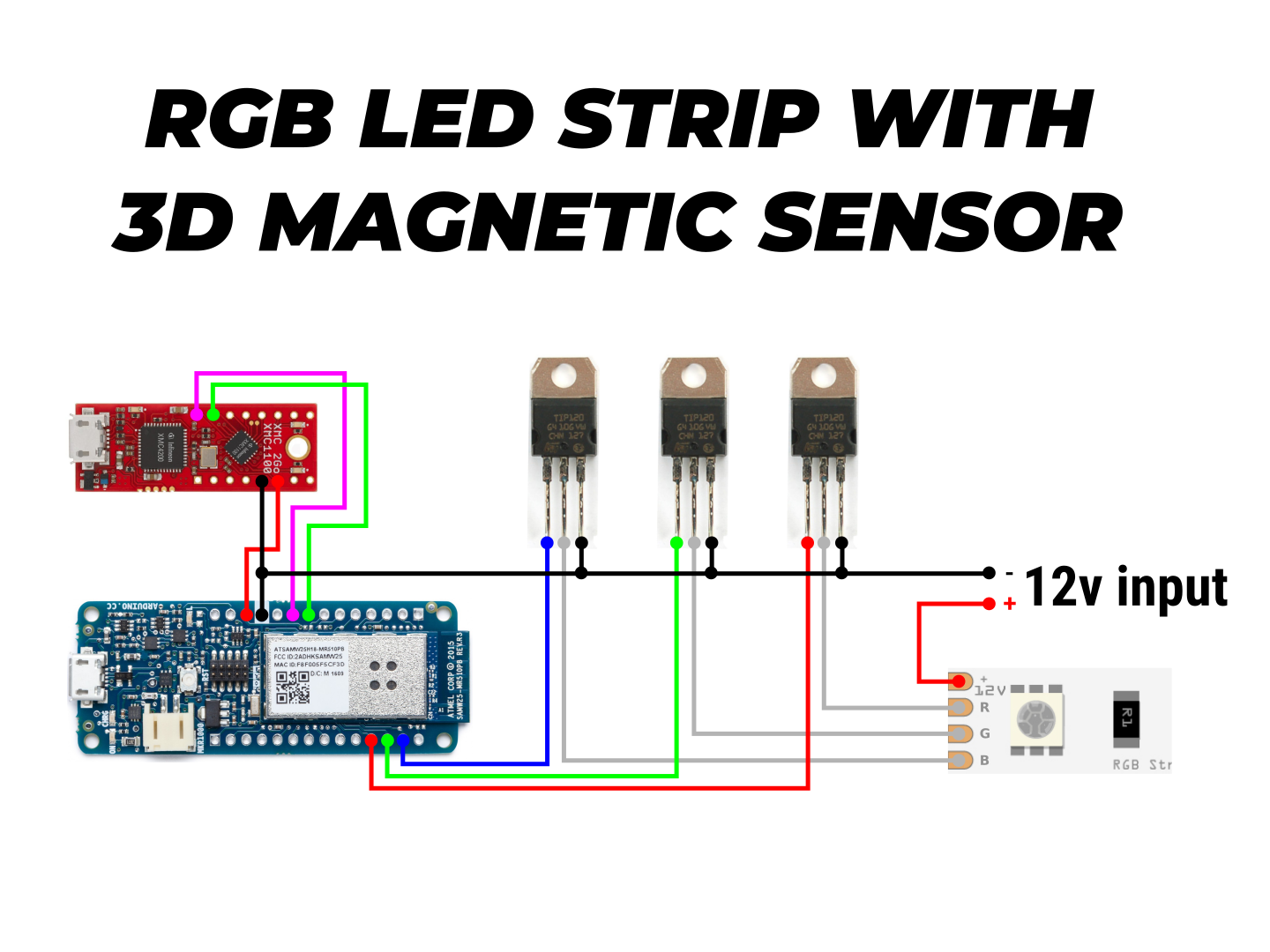 This is my take on a combination of two classic projects: RGB LED control with an Arduino, and an Infinity Mirror.

This project shows us how we control a "Micro Robot Car" and using a RF Remote Control with "Infineon 3D Magnetic Sensor 2Go".

Remotely control your RGB LED strip from your pc.