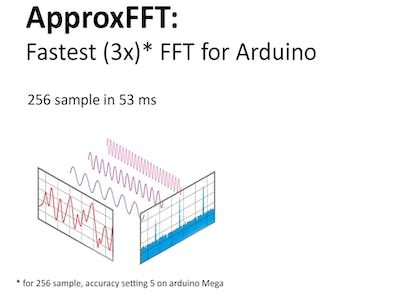 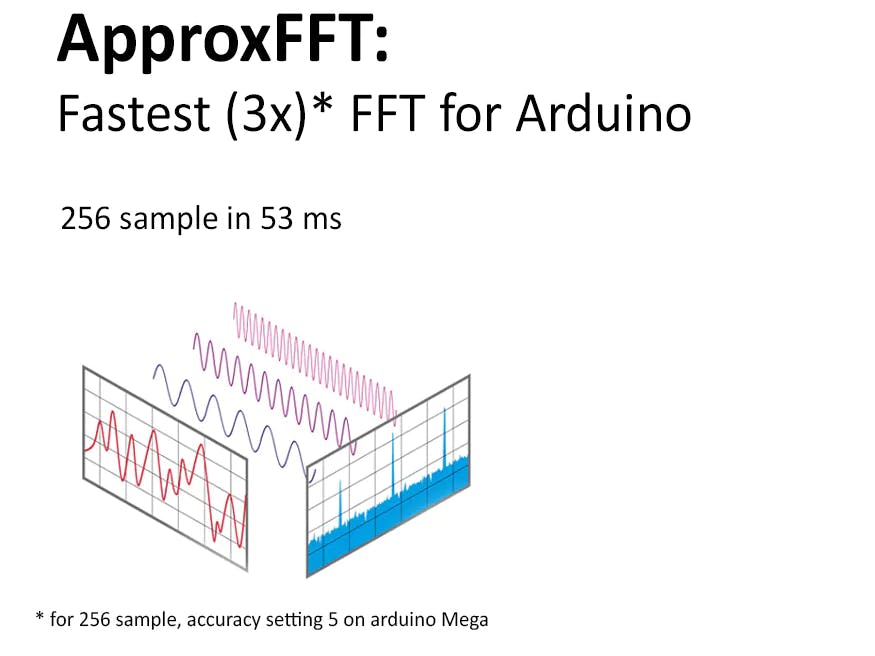 FFT or Fast Fourier transform is one of the most important tools in signal processing. This can be used to detect frequencies with good speed. However, it is a computationally-intensive process and takes a good amount of processing power as well as memory especially on Arduino. This makes it difficult to use for real-time applications where multiple FFT results required every second.

In this tutorial, the fastest program to perform FFT on Arduino is presented. I am naming it ApproxFFT as there are so many approximations taken at multiple stages. However, with very little compromise inaccuracy, I was able to achieve around 3 times speed.

If you want to only know how to use it directly go to 5.

The complete project was also explained in a half-hour long explanation video. you may choose to go through that or read this tutorial.

I have prepared two code previously for the same application that can be accessed here:EasyFFT: this code gives accurate output for FFT, however, it is relatively slow and consumes high memory.It is recommended to go through this tutorial for background on FFT prior to this tutorial.

QuickFFT: This code gives a very fast output. However, amplitudes are far off and not usable for most of the applications. It also gives multiple peaks that might mislead the results.

1: Need of the ApproxFFT Function

If you refer to the attached image, it is very clear that QuickFFT has some significant advantages over conventional approaches (speed calculated with inbuilt sine/cosine functions for EasyFFT). It is almost 4 times faster but lacks accuracy. As can be seen in the second image, the amplitude is way off. The main reason behind this the fact that we have used the square wave (Approximate sine wave!!!) that consists of multiple frequencies (harmonics). there are multiple waves present in the result that makes it difficult for various applications.

If you refer to the previous EasyFFT function, we had two options available. One of those was accurate one to make use of inbuilt sine/cosine function which are accurate but slow. If we go with another method where we have used a lookup table, speed was improved slightly with a small loss inaccuracy.

Here completely different approach was used to calculate this value, which is around 10-12 times faster than conventional ones. These function intensively make use of only bitshift operation for multiplication and (approximate) division. These operations are significantly fast than normal division or multiplication. however, these may cause a precision loss that we need to somehow take care of.

below two lines are the ones that made the speed difference between EasyFFT and QuickFFT. Typically first we have to calculate the sine/cosine for a given value. once the value is available that needs to be multiplied to some another float value. Both of these processes are slow and takes too much time.

Here we have used something similar to the binary shoring algorithm. It will directly give Approximate output for A*sin(θ) and we do not need to do multiplication. In the first plot, ArcsinX vs X plot is shown. a similar plot is a store as the table in Arduino. where angles are mapped from 0-1024 which are equivalent to 0-360 degrees. Arcsine values are also considered as multiple of 128.

this is how the flow of calculation works: here we are ignoring negative values and will only consider for 0-90. (i.e. 500*sin 50 (in degree))

2. newly defined range we will again do a similar step repeated. In our example, the midpoint will be 375, where we will check the angle for.75 that will be 48 degrees. so our answer will lie in between 375 to 500.

similar steps need to be repeated multiple times for accurate output. As can be shown in the second image (graph). The more level we go to, the output will be more close to the exact value.

Here we can perform all operations by only a bit shift and we also eliminated the floating multiplication.

This function makes some approximation for the RSS value. its impact on overall speed is not very significant. However, it saves a few Milliseconds of time.

The attached plot shows the value of error if we assume root off squared sum output same as bigger value. The Error associated with this assumption decreases as the ratio increases. In this code, if the ratio exceeds it simply assumes a larger value as output that saves time. If the ratio is lower than that, based on the value some predefined scaling is set that is applied by doing some repetitions. All these values are stored as the RSSdata.

1. Input data is scaled to +512 to -512: this step is important to preserve the precision of data. as we are using bit shift operation, there will be precision loss in case of an odd number. The bigger the number lower the loss.

3. Input data is ordered as per generated bit reverse order.

4. Frequency transformed is performed. fast sine and cosine were used wherever required. after every loop, the value of all integer checks if the amplitude is higher than 15000, both real and imaginary arrays are divided by 2.

wherever the scaling is performed, scale value is recorded.

5. Root of the squared sum is calculated using the FastRSS function.

6. Max value is detected and returned as output.

1. Lookup data needs to be declared as a global variable. we need to simply paste the below data at the top of the code.

This function will return the value of frequency with max amplitude by default. This is exactly the same as EasyFFT and QuickFFT function.

this value can be set from 1 to 7. higher the number better accuracy. here improving the accuracy will improve the fit of our approximate sine wave. By default, the accuracy value is set to 5. In most cases, this value works well. All result and speed claims are based on this value. Speed and accuracy can be tweaked by changing this value.

5. This code can be modified to display (and use) Raw output or amplitude of various frequencies. the output will as multiple of 2^n. As integer can only hold up to +-32000 values, the output is represented as multiple.

All the test shown on the above image is done on Arduino mega with an accuracy level of 5. below are some of the significant observation on the test:

Hope this code will useful for projects. In case of any query or feedback, do let me know by comment or Email.

This project is performing a faster frequency transform (FFT).

To create a source of ICs that i've investigated and written code for.