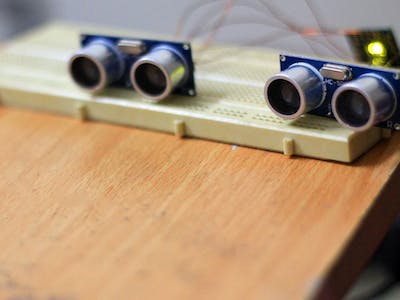 Typically ultrasound sensor used to measure the range of the target, this project can locate the target in two dimensions. 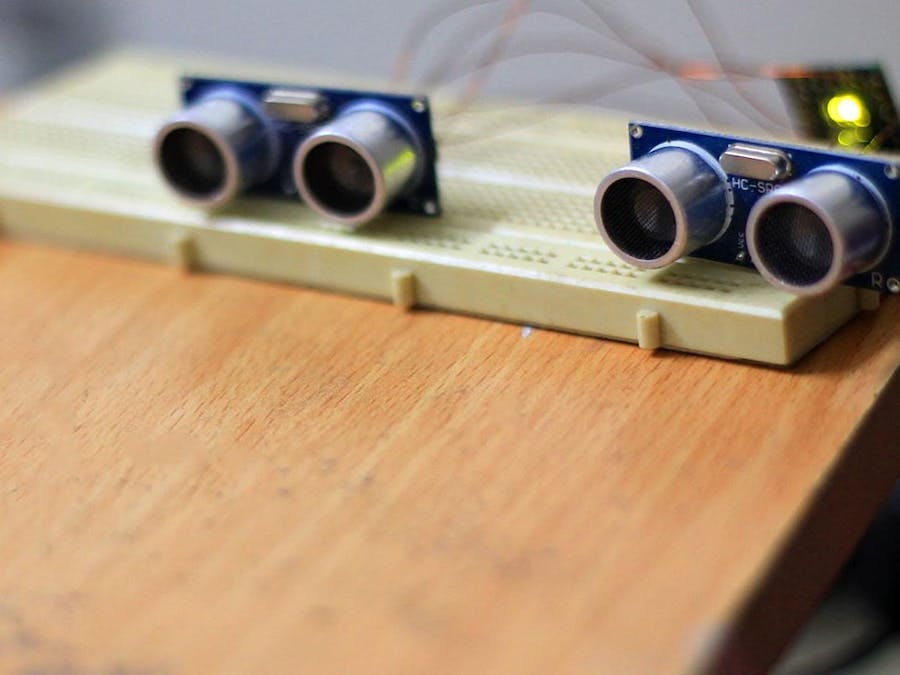 Typically ultrasound sensor used to measure the range of the target, this project can locate the target in two dimensions.

Ultrasound ranging is a complicated task that made easy by the readily available and inexpensive module for Arduino. To detect or measure the distance, it transmits the signal to the target and the target reflects that back. Arduino measure time is taken for complete travel. As the speed of sound is known the distance between module and target can be calculated easily.

Ultrasound sensor or sonar sensors used to measure just the distance from target here I am trying you get the exact location/coordinate of the target. I have used HC-SR04 for the purpose.

I tried to explain a similar thing to the below video.

Explanation on 2d tracking with 2 Modules

from the above plot, it is very clear that the output from the sensor is fairly linear. Slop is also almost one (as expected) and the standard deviation of the error is around 9mm. which is a mostly static error. As I was measuring all distances from the extreme end of the sensor, while Arduino measures it from the transmitting and sensing element.

In the previous case, we were measuring only one distance from the target that gives a circle of that measured radius. the object can be anywhere on the circumference of the circle. But the sensor operates only on the cone shape area so the possibility is reduced to an arc (from a circle).

If the object is in the area covered by only one cone than only range can be calculated. and obviously, we will get no idea about an object if it is outside of these cones.

By measuring distance by two sensors a triangle will be created. in which one angle is the target and rests two angles are sensors. The length of all sides of this triangle is known.

Triangle is completely constrained and any required data can be calculated by applying basic geometry. to measure coordinate od the target cosine rule is applied from which angle from one of the sensors can be calculated which further can be converted to Cartesian coordinate (or polar coordinate with a required reference point).

The attached image shows the formula to calculate the location.

Setup is very simple, as discussed before it required at least two of these ultrasound sensors. I have attached it to the breadboard. The distance between these modules needs to be measured. this distance needs to measure from left extreme of one sensor to left of another sensor or vice versa. below point need to be considered while selecting separation distance between the sensor.

Code is available at below link:

Once the system is set up it can be tested for the various target for accuracy. refer to the previously attached video for a demonstration.

The above method also explained in the below video:

This method makes use of multiple sensors. Higher the number of the sensor can be useful for more accurate measurement. Let's take an example of a setup with 4 sensors (as I am using for the tutorial). So after finishing measurement, we will have the distance to target from all of this sensor.

To calculate the position of the target in the lateral direction we need two measurements to complete a triangle and locate the target position. As we have 4 sensors we will have 6 combinations (4C2) of pairs. These pairs can be seen from the above images.

Once the pair is decided we have to calculate the target location for every combination of the sensor pair. In the end, there will be six measurements for the target location. By using all these six values relatively accurate measurements can be made. now all these data are fused with weightage as per accuracy. if we consider a triangle than the higher distance between the sensor will lead more accurate. So higher weightage is given to the pair having a sensor far from each other.

This method is still not very accurate as we are not making the measurement from the single point target. as the target is a planner object sensor that will measure the distance from the nearest point.

After that, all these sensors need to be mounted with a fixed distance. similar to the previous case, higher separation will lead to better accuracy and vice versa. the sensor may face in any direction for best coverage. In this case higher the number of sensors will face the target better result we can obtain.

There are basically 4 functions that work to get accurate output and avoid a false reading.

1. Raw_cap(): This function will simply take data from the available sensor, sensor number can be any number, as discussed higher number will give better accuracy. another point need to consider is that in the command

The Value 5000 need to be changed as per object placement, once we had the approx operating range we can calculate the value of time taken (in Microseconds) by the sound wave to travel through and back to the range and replace with 5000. At the completion of the function, we will end up with an array having values measured by all sensors.

2. Position_calc(): This function will take various combinations (nC2 for n number of the sensor) and will calculate the position of the target in 2D,

4. Fuse_data() The above function will take the weighted average of all measurements, weightage proportional to distance in between the pair of the sensor.

Setting Up the Code and Testing the Output:

Values like the number of sensors and sizes of arrays as commented in code need to be updated. Another important parameter is the distance between these sensor need to be defined. Here the distance from the leftmost sensor to all sensors is added in an array named Position [ ].

Once everything is set up target can be placed in front of the sensors and check the output from the sensor.

This tutorial is on the IR sensor application. It also specifies a method to remove static and low-frequency noise.