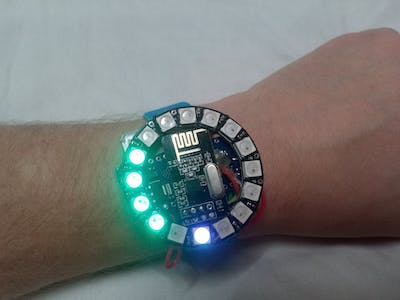 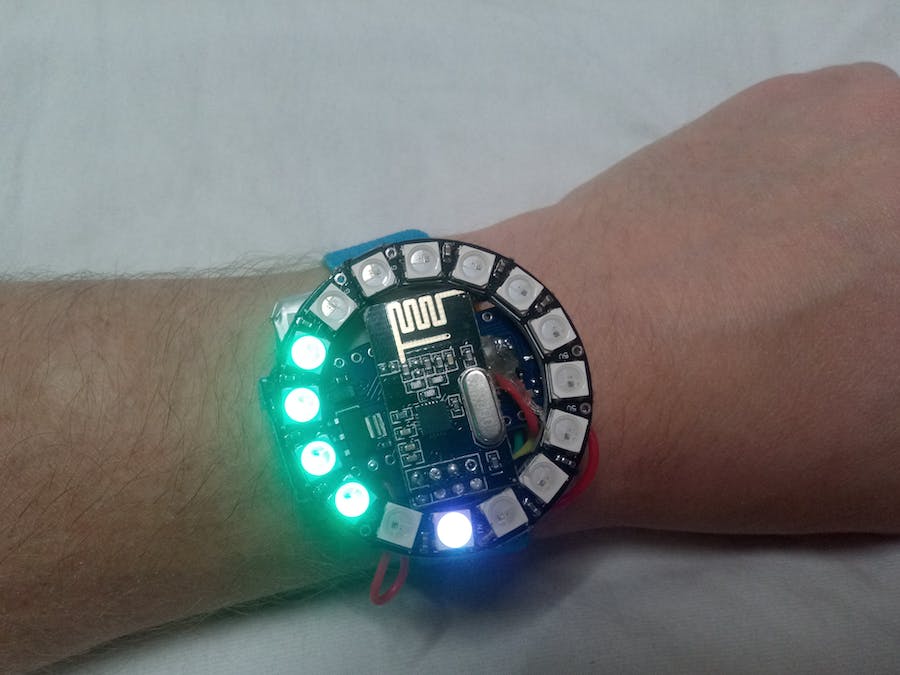 This is a second iteration of my heart monitoring project, previous one was showing heart beats on a chest, and was connected to uECG via wire. That looks cool, but isn't practical at all - you can't see well how many LEDs exactly are currently on, it's out of your normal view field, and wire connecting it to uECG device creates a lot of problems for the sensor itself, so it basically doesn't work when you run.

This version solves all these problems: it is wrist-worn, so you can see it while keeping eyes on the road, and it's wireless, so no distortion of readings, it really works for running and allows you to keep track on heart load.

Same as in previous project, all hard work is done by uECG - it measures data and calculates BPM on-board. But also, when it's switched into direct link mode, it sends all this information (together with high resolution ECG data, which we are not using here) via radio protocol that is compatible with generic nRF24 chip. So second critical component is nRF24 module. And Arduino Nano has just the right size to fit underneath a small LED ring, so I'm using it as a controller (but really anything would work just as well here).

Connecting nRF24 module isn't simple, you have to connect all SPI wires (MISO, MOSI, SCK, CS), also chip enable wire, and power supply. And if you want it in a reasonably small size - all pin headers have to be removed, and wires soldered directly to pads. So connecting nRF alone takes 7 wires, 14 soldering points. The good news is that everything else is simple: LED ring requires 1 data wire and 2 power wires, and another 2 power wires go into battery connector.

Important note: you can't connect MOSI, MISO, SCK wires to any other Arduino pins. SPI hardware sits on D11, D12, D13 and won't work if not connected there. All other pins can be changed (if you'll make corresponding changes in the program).

The only complicated thing about software here is RF channel configuration. I spent quite a while trying to make it work before I realized than uECG and nRF24 use different bit order for pipe address. When I fixed that, everything started to work immediately :) Basically we just read incoming packets, use their 5th byte as BPM, and filter it (RF channel is noisy, so every now and then you get random value instead of correct reading, and hardware CRC is disabled for compatibility reasons). After that, BPM is converted into color and number of active pixels, and that's it.

When all wires are soldered, program is flashed, and you confirmed that uECG data is received - it's time to get it all together.

I've chosen a very simple way to hold it all together - thermal glue. Since parts themselves are almost fitting already (Nano fits outer ring size, nRF24 module fits internal ring size, and battery, while not fitting any part, somehow doesn't get much in the way - not sure how it works, but I just glued it there and somehow it was really ok :)Then I sewed it to a some random wristband I had at hand (leftover from soldering station pack, a band that is used for grounding while soldering), and that's it!

For testing, I went for a run, and it worked just fine except for one surprise. I've used such settings that at 192 BPM all LEDs were on, since by all recommendations such heart rate is too high for my parameters. The surprise was that I've exceeded it in just a few minutes of running, without even noticing that. I even thought that it could be sensor error, but no - when I stopped, it didn't immediately went down, instead there was a slow relaxation (sensor is 100% reliable when there isn't much motion). So it turns out that for a while I'm training well above my healthy threshold (at least what is supposed to be healthy for a standard adult of my age/weight). It's interesting: I'm quite into (amateur) sports since childhood, but I had problems with heart in my teens and they seemed to go away over time. But I know from experience that any load higher than a fast walk was really hard for me, yet I kept training - and that increased my limit over time, to the point that now I consider myself quite well fit. And now I have a question - is my BPM just higher than normal due to those heart problems in adolescence, or I'm really pushing too hard without realizing that? Anyway I'll have to do something with it - either increase max BPM on the monitor, or train less intensively. :)

P.S. surprisingly, uECG performed very well as an EMG sensor - you can read about it in my Robotic Hand Control project