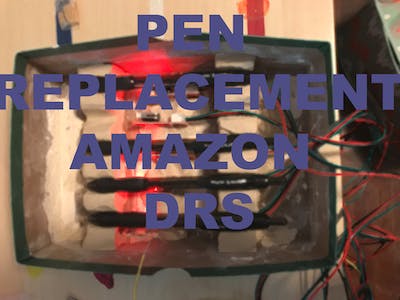 A pen holder that determines when there are two or less pens and triggers an Amazon pen set replacement. 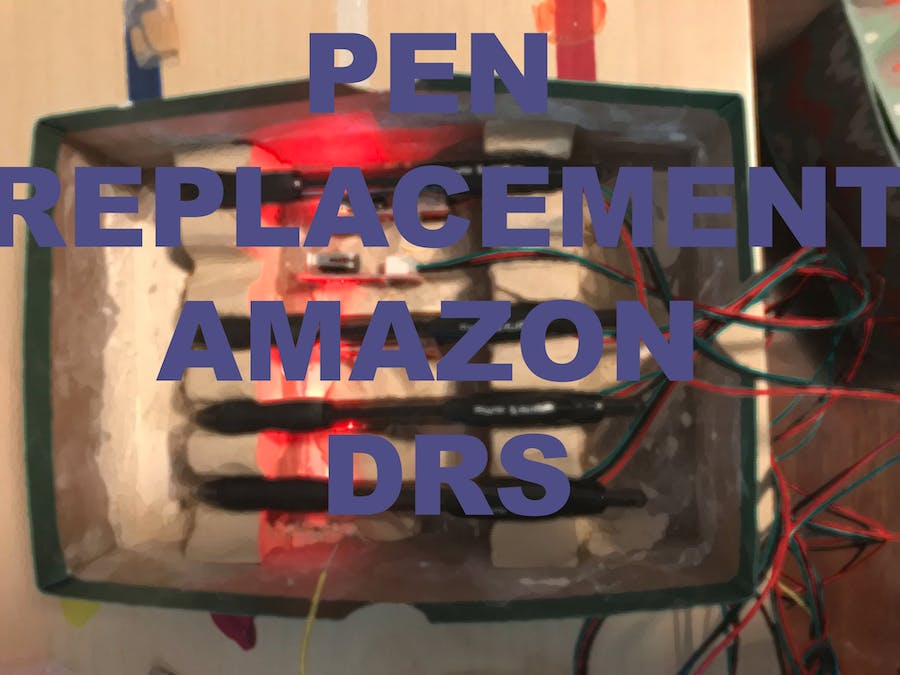 A pen holder that determines when there are two or less pens and triggers an Amazon pen set replacement.

I used the Arduino MKR1000 as the microcontroller to create my Pen Replacement system. I used the MKR1000 because it is wifi enabled and there is a great resource for connecting to Amazon DRS with an internet connected Arduino. Make sure that the Arduino software is updated completely before adding the AmazonDRS, AmazonJSON and Wifi101 resources. When I ran it with an older version of the Arduino software, I got a bunch of errors that prevented me from compiling the code.

The tutorial on the website: https://github.com/andium/AmazonDRS is very helpful but there are a couple notes that isn't mentioned that caused me some frustration. Within the Security Profile>Web Settings, make sure that you add https://www.getpostman.com/oauth2/callback to Allowed Return URLs. When it gets to the part about AmazonTokens.h, you need to remember to clear the refresh_token, the authorization_grant_code and the access_token before you run the authCodeGrant code to get the refresh_token. Besides that, the github resource is very well written and concise that covers almost everything that you need to get Amazon DRS setup on your MKR1000.

Before I set it up for the limit switches for my project I tested it with what the example suggested which was a single pushbutton onto pin 12. This was found in the examples under amazonDashButton example.

I wanted to use limit switches instead of photoresistors or a mass sensor for a couple reasons - photoresistors require analog inputs so if I wanted to scale the device to detect 24 pens instead of 5 then I would need a lot more analog inputs. Photoresistors would also require me to autoadjust the system based on outside light. If the system was in a drawer or someplace very dark, the photoresistor wouldn't do it's job very well. I didn't use a mass sensor because if a user stacks a bunch of stuff on top of the pens (like in an office environment) then there would be no indication about whether it was random stuff or something specific.

I used five limit switches and put them in a row so that each one lines up with a pen. I used quick drying clay to make a shape that would line up the pens with the limit switches. The limit switches were larger than I had initially hoped so because of that, I decided that this project was more of a proof of concept rather than a fully fledged project idea.

See the modified code that I wrote and the comments in the code for how my logic works. Below are images of the results are from running the code.

When the system requests a replacement, it asks Amazon to send an email to the user to notify them that the replenishment is being ordered and is on its way.

Adapted from the Amazon Dash Button example from the instructions I followed, this was changed so that it would take in five inputs and convert it to a number and perform logic based on the number/state.

A project using the AmazonDRS library for WiFi101 connected Arduinos. Just like the AWS IoT button, but completely open source!

The Dash Lid is an easy to use, low friction replenishment device. You just use it like a lid.

This project utilizes a combination of RFID, Load Cell Sensors, and connectivity through Arduino and Echo for an Amazon Based Smart Pantry.

Project in progress by Tanner Stinson