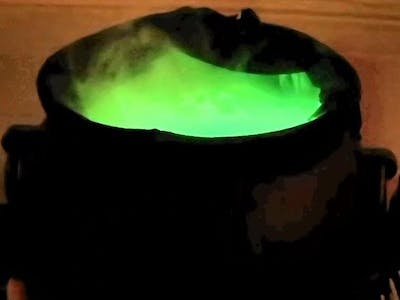 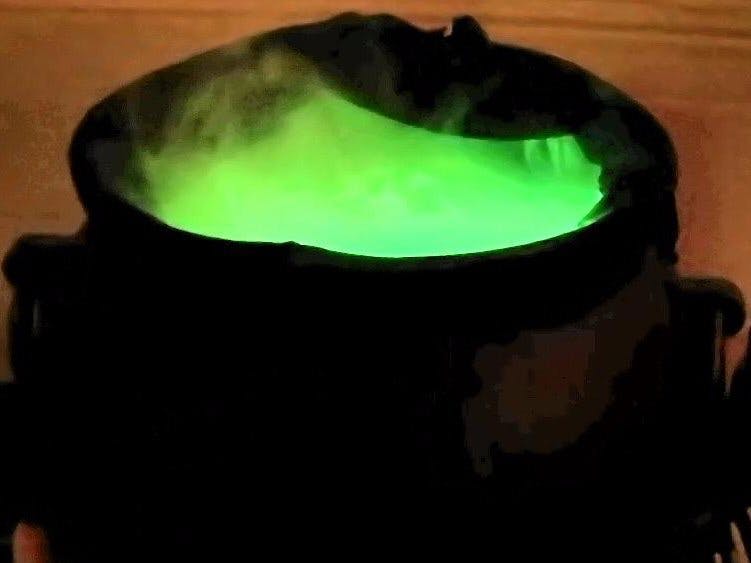 You Can't Creep up on This Creepy Cauldron! © GPL3+

About a week before Halloween I discovered that my trusty (and cheap) store-bought witch's cauldron, with sound effects, fog, and lights, was no longer working.

Rather than throw the whole thing away, I decided to rip out the guts and retrofit the cauldron with new components and added interactivity.

My idea was to have the lighting and sound effects get increasingly intense as unsuspecting children approach the cauldron. This would be accomplished by an Arduino Uno, MP3 sound module, LED disc, and two ultrasonic foggers.

By the time the parts arrived I only had two days to put it all together, but somehow managed to get a working version ready for Halloween night.

The Creepy Cauldron in Action

I prepared my cauldron by ripping out all of the existing components. (The built-in fogger required messy "fog juice", so I was not sorry to see it go!)

For your build you'll be starting with a new plastic cauldron (see parts list), so you can start at step 2.

We need to drill three holes at the back of the cauldron - two to accommodate the power cords for the two ultrasonic foggers that will be inside, and a small hole for the LED cable.

The holes for the fogger cords should be just a bit larger than the cable itself, such that the cable gland can be squeezed into the hole to make a waterproof seal. The hole for the LED cable should be about 1/4" in diameter.

Tip: I've found that Brad Point Drill Bits, like the ones shown in the above gallery, make the cleanest holes when drilling through plastic.

The photos in the gallery below show a schematic view of the required connections, and how they are implemented for this project using a perma-proto board.

Did you notice the cable coming from the proto board? It's called a Grove cable, and will be plugged into a Grove shield that sits atop our Uno.

Tip: The Grove system, from Seeed Studio, consists of shields, cables, and components, and is a fantastic way to create quick prototypes with secure connections.

To light up the fog inside the cauldron we'll be using a seven-element RGB led disc. (You can use other RGB lights that you may already have on hand.)

On the other end of the cable, cut the red wire and attach it to the yellow wire of another Grove connector. When you're done the cable will have two connectors and will look like this:

Wait, why couldn't we just use a single connector, since it already has four wires?

The four wires in a Grove cable are always comprised of power, ground, and two other lines (for digital or analog signals), but we need three digital signal lines - one for each of the red, green, and blue colors of the LED.

Now that the LED is wired up and ready to go, attach it to the inside bottom of the cauldron using a little bit of removable mounting putty or other suitable method.

We can't expose the LED disc to water, so we'll place a piece of clear plastic sheeting inside the cauldron, secure it with hot glue, and then trim the excess.

Once the plastic is secured, find the location of the holes that you drilled in the back (for the three cords) and make a slit in the plastic for each hole.

Since the goal of this project is to increase the drama as curious trick-or-treaters approach the cauldron, we need a distance sensor. I happened to have a very accurate Ping Ultrasonic Distance Sensor on hand from another project, but I'm sure that a less expensive sensor would work well enough for our purposes.

The Ping cable needs to be long enough to go from the front of the cauldron (where the sensor will be placed) to the Uno (which in my case will be inside the base of the cauldron).

One end of the cable will have a Grove connector, and the other will have three wires soldered to the Ping. Here are the connections to make:

The cauldron software supports three "moods", corresponding to the distance detected by the Ping sensor, with each mode having a different lighting pattern and sound effect audio file.

To get the required audio files into your sound module:

Step 8 - Connect it Together

By now I'm sure you can almost smell the sweet stench of the bubbling witch's brew!

Line up the pins of the Grove Shield with the headers on your Arduino Uno, and press it all the way down.

Now make these connections to the Uno and Grove shield:

My cauldron, having been gutted of its prior electronics, had a handy spot in the base to house the Uno, sound module, and speaker.

Your new cauldron will most likely not have space inside, so you'll want to conceal the Uno and sound module behind the cauldron (perhaps beneath some black cloth) and position the speaker so that it faces out towards your visitors.

Turn the cauldron over so that it's right-side-up, place the two foggers inside, and thread their power cords through the two holes that you drilled in the back.

Be sure to squeeze the cable glands into the holes, to make watertight seals.

Finally, tape the Ping distance sensor to the front base of the cauldron and conceal it the best you can with some black fabric or other material. However, don't obstruct the part of the sensor that send or receives the ultrasonic waves or you won't get accurate distance readings.

Of course all this cool hardware won't do anything without software to control it.

Follow these steps to get the Creepy Cauldron program running on your Arduino Uno:

Note: You may need to temporarily unplug the sound module cable from the Grove Shield's serial UART (TX/TX) connector while uploading the code. That's because the sound module uses the Uno's hardware serial capability, as does the Arduino IDE when uploading code.

The software supports three "moods" that correspond to the detection of a human or zombie (or, actually, anything) at these distances:

The current mood is determined in the main loop every second, based on distance readings from the Ping sensor. A change in mood triggers a corresponding change in lighting pattern and effects audio file.

Now for the moment you've been waiting for...drum roll, please!

Sit back and enjoy the fun as neighborhood ghosts and goblins creep closer and closer to your creepy cauldron, only to shriek in horror as they look inside!

There's plenty of room to take this first version to the next level. Here are some of my ideas:

If you like this project and want to show me some love, please click the "Respect" button at the top of the page.

This code for Arduino Uno is part of the Creepy Cauldron project, which was entered into the Make/Hackster.io Halloween contest in 2016. 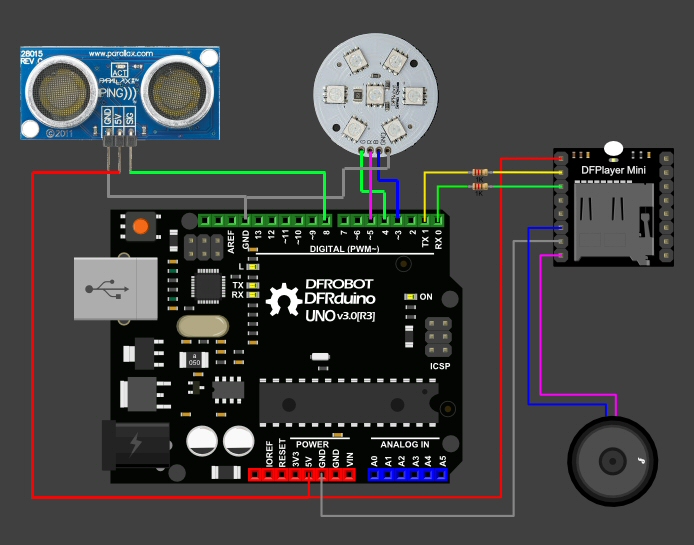 A "Magic Cauldron" that detects spell casting and responds with dynamic lighting effects.

There's no better way to say "Happy Octoween" than with your own twitter controlled reaper.

This ouija board gets a life of its own, with the planchette vibrating when it approaches certain letters - and it opens a lock!