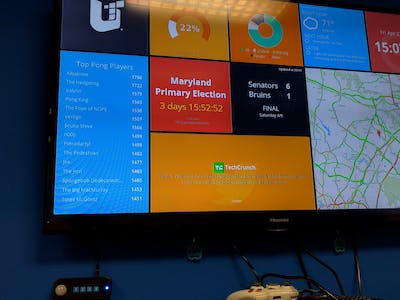 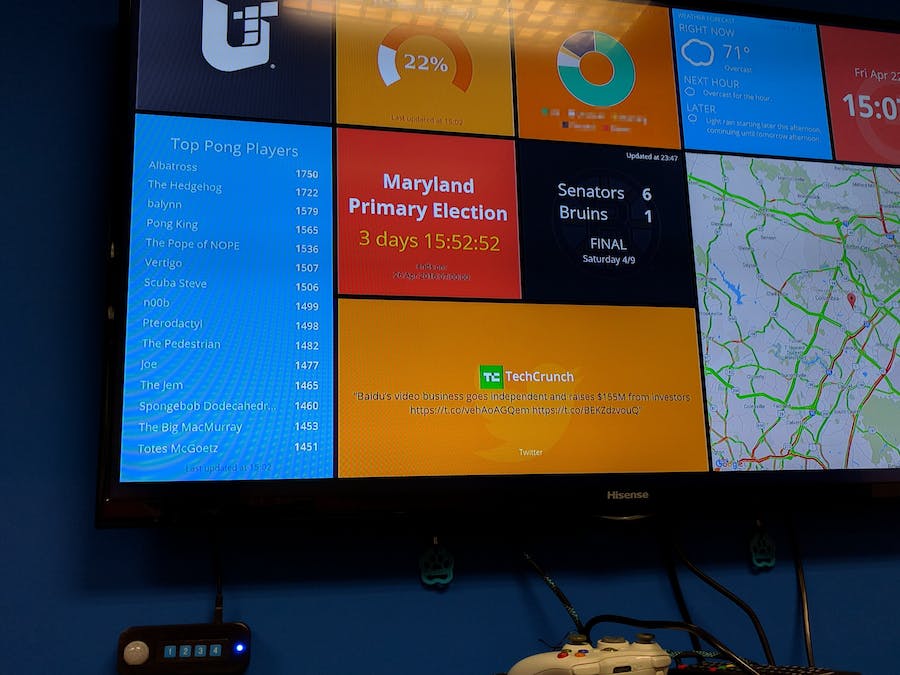 Before I get into the build details, here's what the final result looks like:

The overall goal of this project was to create several dashboards to display helpful, interesting information for team members at work.

There was simply too much information to show, so the dashboard needed to split into multiple dashboards.  A controller was therefore required in order to switch between the dashes.

The dashboard was built using the Ruby-based Dashing framework.  It runs directly on a Raspberry Pi 3 which is tucked behind the TV.

The dashboard control box is powered by an Arduino Nano rev 3.  This connects to the Pi via USB - this provides both power and communication (via USB serial).  This controller has three functions:

The controller sends these single-byte commands via serial:

These are sent from the Arduino via the USB serial connection to a simple Python daemon running on the Pi.  The daemon has a few responsibilities:

Iceweasel was chosen because it's fairly light-weight, supports the latest standards, and has this handy plugin for sending browser commands over a TCP socket.  The Python daemon uses this to change the URLs (and thereby switch between dashboards).

Building the dashboard was fairly straight-forward - just install Ruby and Dashing. Some of the widgets are third-party and others (like the Top Pong Players and NHL scores) were built custom.

Once that was in place, I worked on building the Python daemon which was pretty straightforward.

This was the most-challenging yet most-rewarding part of the project.

Here's a photo of the original circuit I designed:

The green LED was later swapped out with an RGB LED, allowing multiple states to be shown by changing colors:

Once I got the circuit working, it was time to design the enclosure!  I fired up Tinkercad and spent several hours modeling the parts and designing the enclosure:

The top-right piece is the back panel.  Two rectangular strips were carved out so it could be mounted flush to the wall with 3M strips.

The bottom-left piece shows the front of the controller.  The large round hole is for the PIR sensor.  In the middle I've carved out another rectangular strip so the 1x4 membrane keypad can sit flush.  A smaller hole for the LED was also cut out on the right.

Here's a look at the other side:

I wanted to screw the back panel on, so I created posts for that purpose.  If you look carefully at the back panel's edge, you'll that it won't fit perfectly due to those circles on the rounded corners.  These were trimmed with a Dremel after printing.

I don't have a 3D printer, so I used 3dhubs.com to find a local maker who could print the case for me. Once the case was printed I began installing the components:

I'm really happy with how this came out!  Especially since I had never worked with Arduino, 3D printing, and Ruby before.  It was a huge hit at work too!

Source code for the Arduino firmware and the Python daemon
https://github.com/colinodell/dashboard-arduino-controller

Download
I modeled the different parts in Tinkercad to see how they'd fit and build the case around them.

Download
The final enclosure for the Arduino-powered controller. The cover didn't fit because I forgot to account for the round screw areas, so I had to trim them with a Dremel.

I used yellow for the model for easier visibility while editing, but the final product was 3D printed in black.

Download
The final circuit breadboarded. Note that the resistor values might be off. Also, the 1x4 keypad doesn't exist in Fritzing, so I used normal buttons to approximate them.

I built an automated M&M launcher that finds your face, and shoots chocolate into your hands/mouth/cup!