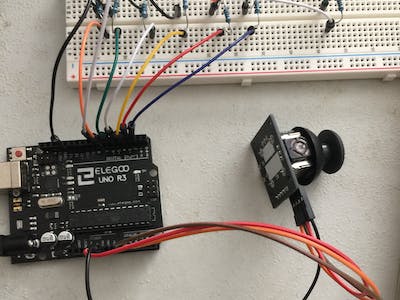 The classic whack-a-mole game using LED lights and a joystick. 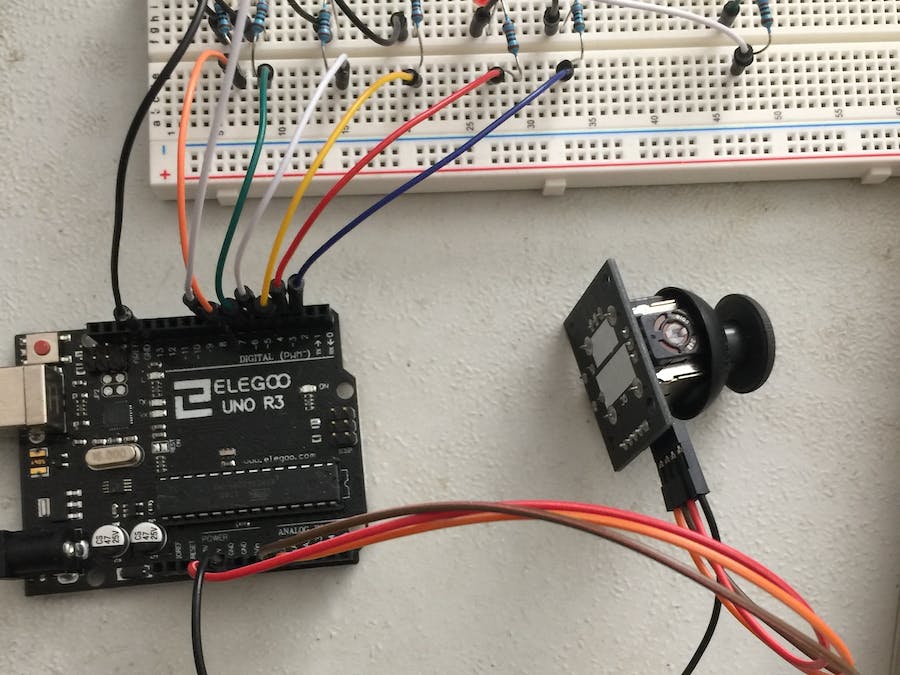 The classic whack-a-mole game using LED lights and a joystick.

This was my first Arduino project, I built it based off what I learned from the early on tutorials on LED's and basic controls.

This "Whack-a-mole" game uses 7 LED's, and a joystick. There are 4 "moles", represented by the 2nd, 3rd, 4th, and 5th lights from the left on my board. One of the four lights will randomly light up and give a set amount of time to hit the corresponding direction on the joystick. I have arranged my lights so that, from left to right, the selections on the joystick are: left, up, down, right. This is just the convention that I chose, so creative and try other ones!

The two lights on the left are red and green, which indicate a incorrect or correct choice. The yellow light to the far right blinks the count for the current high score, and it indicates the score every time a run is over (whenever a wrong choice is made). Naturally, a new high score replaces the old one.

Perhaps the most complicated part of this project is the analog joystick. For both directions of the joystick, there are max values of 0 and 1024 (for mine, I had to use 1023, so if you aren't getting the selections correct, you can try that). I believe these values can be measured as well using a serial window. I simplified these input values using switch statements for both the x and y inputs. I am not sure if this is the best way to do it, but because I only needed the max values of each direction (i.e, only 4 options, 4 LED moles) I assigned integer values to each possibility: 1, 2, 3, 4 corresponding to Left, Right, Up, Down.

The difficulty levels that I have written into my code as constants, are the time in milliseconds that the person has to make a selection. You can mess around with these times to change the difficulty for your own preference. I thought about integrating a choice using buttons or maybe the joystick at the beginning of a turn, but it wasn't really worth the work as I feel it would be pretty complicated and not really user friendly.

By all means, let me know what modifications and improvements can be made! :)

Download
Everything should match the real picture of the project except for the joystick. My joystick has 5 pins, 4 or which I have used: named from top to bottom "GND", "+5V", "VRx", and "VRy". "GND" and "+5V" are connected to GND and 5V on the arduino, "VRx" and "VRy" are connected to A0 and A1. 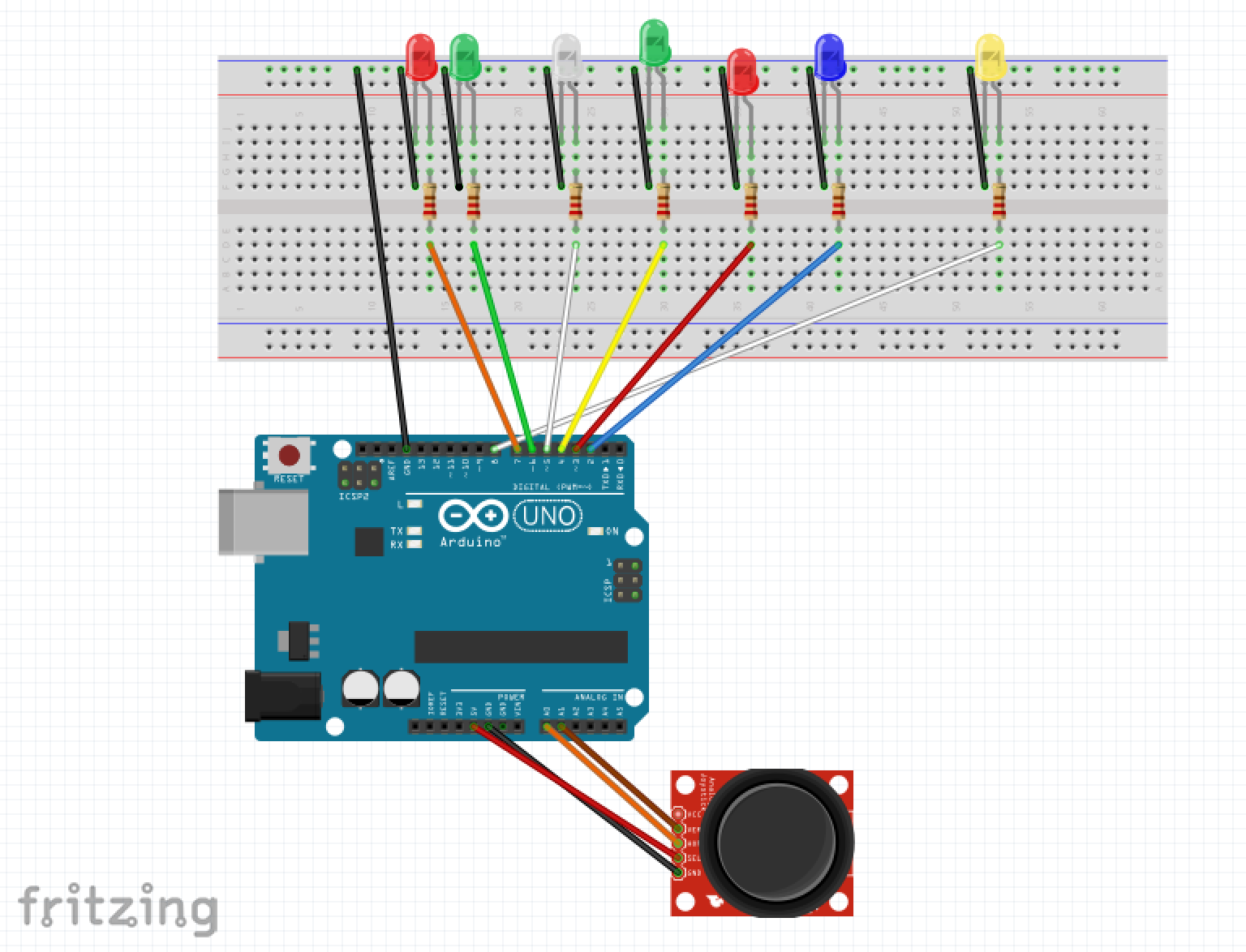 Download
Everything should match the real picture of the project except for the joystick. My joystick has 5 pins, 4 or which I have used: named from top to bottom "GND", "+5V", "VRx", and "VRy". "GND" and "+5V" are connected to GND and 5V on the arduino, "VRx" and "VRy" are connected to A0 and A1.
whack_a_mole_schematic_CBciL9GiCP.fzz 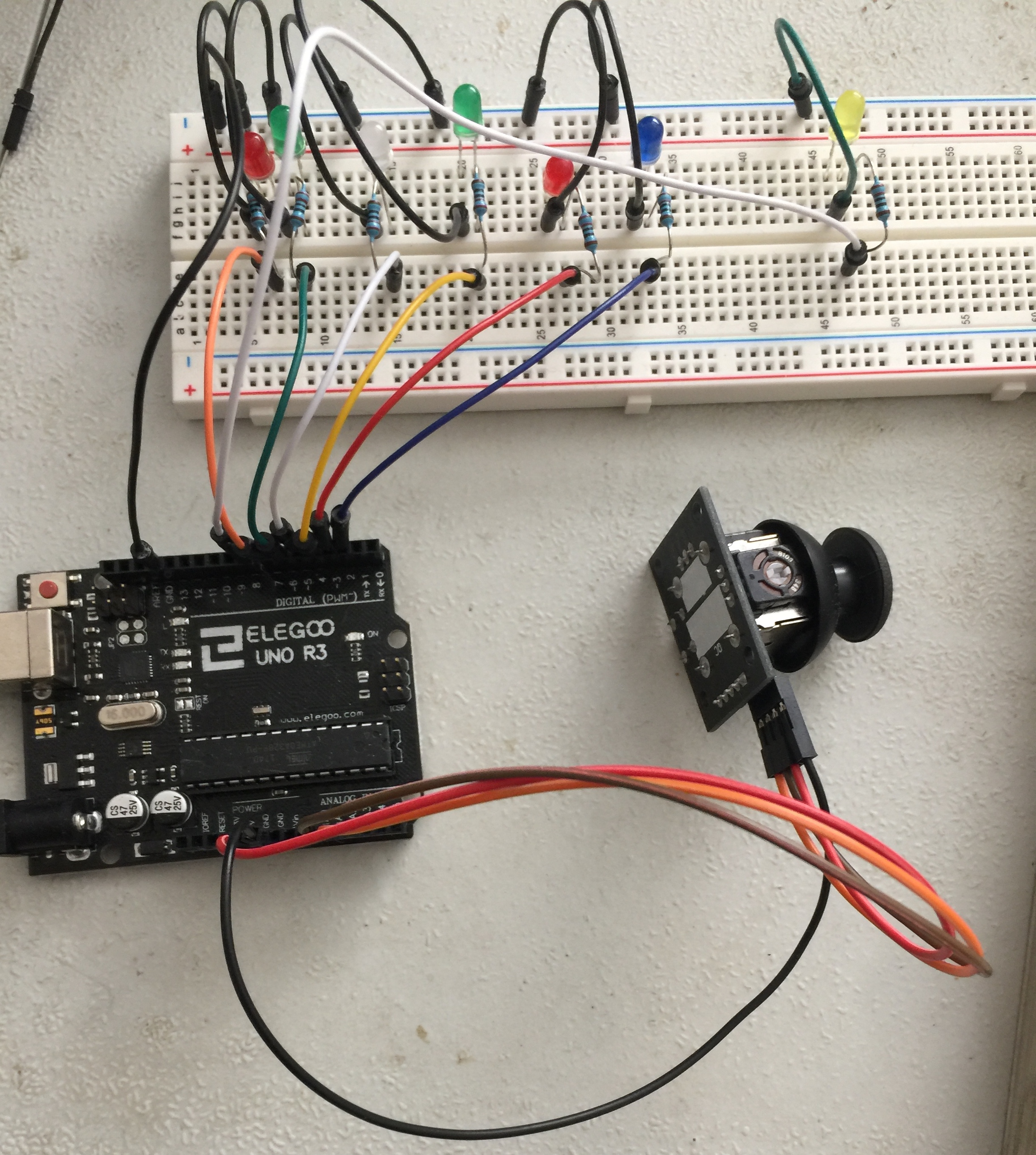 Use a normal LED to sense light.

LED as a Light Sensor