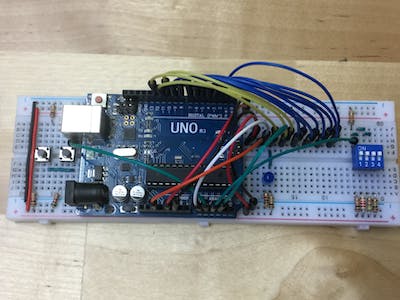 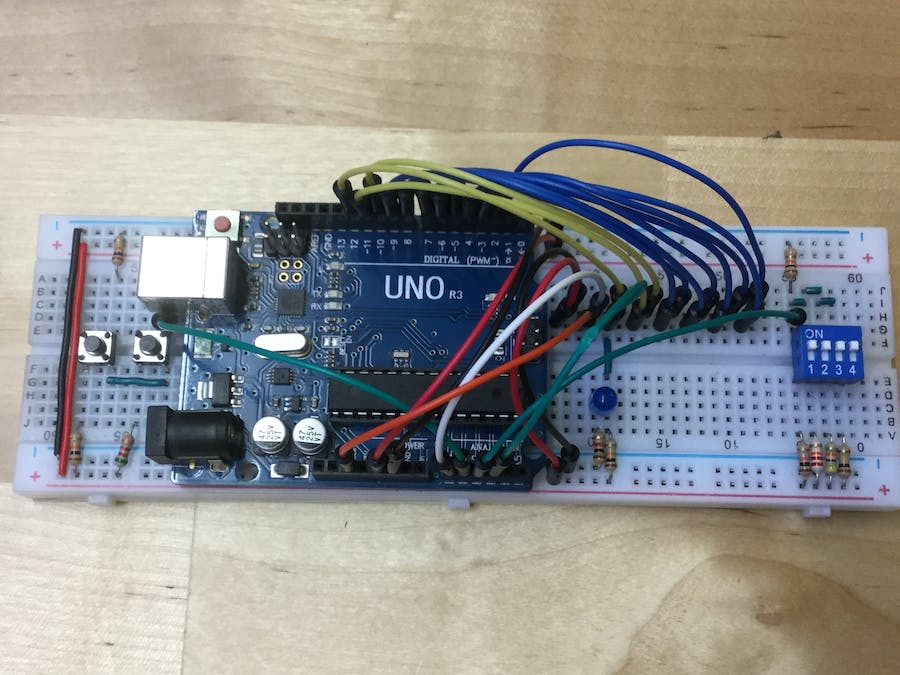 What is this project?

This is an extension to Ben Eater's 8-bit breadboard computer project. I have immensely enjoyed following Ben's videos on how to build a breadboard computer and building my own version of it. If you have not been following along with Ben then I highly recommend watching his videos before reading - this project will make very little sense without the context.

After building the computer it quickly became clear that if I had to manually toggle in a program via DIP switches every time I turned it on then it would not see much use at all. Even toggling in just 16 bytes over and over again gets old very fast. Also I was planning to extend the memory to 256 bytes and that was only going to be useful if somehow programs could be loaded and saved.

What can I do with it?

Here's a video demonstrating these features. Please excuse the video quality - I'm by no means a professional video content creator:

I had a few goals in mind while making this project:

In the beginning I though about using an EEPROM to store programs and then some kind of logic to transfer programs from the EEPROM to the breadboard computer's RAM. However, coming up with the transfer logic proved to be more complicated than I could handle (I'm more of a software guy even though I really enjoy working close to hardware). I happen to be a big Arduino fan so at some point I started thinking of replacing the transfer logic with an Arduino. It took some time to convince myself that using an Arduino was not cheating (after all even the Arduino UNO is much more powerful than the breadboard computer itself) but I'm happy with the result so I have made my peace.

So what does the Arduino need to be able to do? Well, it needs to be able to read data from memory and write data to memory. The easiest and least intrusive (to the breadboard computer) way to do that is to use the same interface that the memory module already has: the bus and control signals. The Arduino digital I/O pins are bi-directional, so connecting 8 of them directly to the bus allows the Arduino to read from and write to the bus. To make the RAM module read from or write to the bus all that is necessary is to set the MI/RI/RO signals accordingly. Now those signals are usually driven by the control logic's EEPROMs so having the Arduino control them too would lead to conflicts and possible short-circuit situations. However, the AT28C16 EEPROMS used by Ben have a Chip Enable (CE) input that puts all data outputs into a high-z state - which then allows the Arduino to manipulate the signals. To read out the RAM, the Arduino needs to do the following:

And that's it. Writing RAM contents is very similar, the Arduino just needs to write to the bus and set RI high instead of RO. There are of course some technical issues to be solved but the above basic mechanism is the heart of this project.

What changes do I need to make to the breadboard computer?

There are two changes that need to be made:

The pull-down resistors are required because once the EEPROM is disabled, the pull-up resistors of the logic gates that the control signals (such as AO/AI/EO...) are connected to will pull those signals high. That would mean that multiple registers would be writing to the bus, causing conflicts.

The pull-up resistors on the inputs of 74LS gates are around 10k. So the pull-down resistors need to be small enough to get the voltage down into low territory. For most of the signal lines I used 3.3 kOhm resistors. However, there are two exceptions: first, the "SU" signal is connected to 8 exclusive OR gates, meaning that the effective pull-up resistor is 10kOhm/8 = 1.25kOhm. A pull-down resistor would have to be significantly less than 1k to pull this low. Luckily, the SU (subtract) signal does not control any interaction with the bus so we can just ignore it and not have a pull-down resistor. Secondly, the CE (counter enable) needed a 1k pull-down resistor - larger values caused random program counter behavior in some cases.

I found it easiest to add the pull-down resistors on the breadboard that holds all the blue LEDs, i.e. between the LED anodes (which are connected to the EEPROM outputs) and GND.

For my build I didn't need to do anything for this because I am using one EEPROM output to reset the ring counter. This improves performance by resetting the ring counter as soon as an instruction is finished. It also automatically gives me the ring counter reset when the control logic EEPROM gets disabled: the pull-down resistor on the EEPROM's output will pull the signal low which resets the ring counter.

If you're using Ben's implementation of a fixed 5-step ring counter, I think the following extension to his reset circuit should reset the counter when if CE is high (click the left/right arrows below to switch between Ben's original circuit and the extended version):

As you can see it requires 3 more NAND gates, i.e. one more 74LS00 chip. Note that I have not tested this approach but it should work as far as I can see.

This modification is not absolutely necessary - you can leave it out in the beginning. Loading and saving as well as the monitor/assembler/disassembler will still work just fine. However, any action that requires transfer of control from the Arduino to the control logic will not work. Most notably that is auto-running saved programs at startup as well as single-stepping and running in the debugger.

How do I set up the Arduino?

Upload the sketch from the GIT archive to the Arduino and connect the Arduino to the breadboard computer as follows:

Apart from that you will need to wire the Arduino's analog 1 and analog 2 input pins to the DIP switches and push buttons as shown in the schematics (for more details see the attached Fritzing file).

For an absolute minimal (but still functional) version, you can do the following:

To use the load/save buttons, all you need to do is connect the buttons, DIP switches and associated resistors to analog pin 1 and 2 according to the schematics.

How do I load and save programs?

With the minimal setup, you should be able to use the "m", "M", "C", "l" and "s" commands. These allow you to see memory contents, modify memory contents and load and save programs.

To save or load a program via the button:

How do I use the assembler and disassembler?

To use the assembler/disassembler and debugger features you will first need to alter the program on the Arduino to conform to your specific setup. Find the section in the source code that defines the opcodes_4bit structure:

Each line specifies one opcode:

You will need to adjust this list to reflect the opcodes you have implemented for your breadboard computer. The last two lines are special opcodes used by the assembler and should be left as they are.

After entering all your opcodes, upload the software to the Arduino. Connect your terminal and go into Monitor mode (either by pressing ESC in the terminal window or by setting all DIP switches to on). You should now be able to disassemble your program. Typing just "d" in the monitor will start disassembling at address 0.

The assembler is minimal but works pretty well. Type "a" to start assembling at address 0. Conventions are:

For example, the Fibonacci code can be entered as follows:

What are the limitations?

In its default configuration the Arduino sketch can handle clock frequencies on the breadboard computer of up to about 1-2kHz (maybe a bit more). Note that Ben's clock in its default configuration does not go faster than 500Hz. If your clock is faster, look for the #ifdef FAST_IO switch in the code. Turning on FAST_IO should make the Arduino work with clock speeds of up to 250kHz. I have tested it up to 160kHz. It would probably be possible to support higher speeds by implementing the time-critical loops directly in assembler but honestly a 160kHz clock speed already feels too fast on the breadboard computer with its otherwise limited capabilities. Make sure to read the corresponding comments in the code before turning on FAST_IO.

The Arduino has 1k of EEPROM and therefore can hold 1024/16=64 different programs. Actually it is 63 since 16 bytes are reserved to save configuration data. That's not a lot but probably enough to hold all programs you can come up with. Only the programs number 0-15 of those can be selected via the dip switches (1-14 for autostart) but the "s" and "l" commands will work with the full 0-62 range.

It looks a bit messy. Can you neaten it up?

Yes! In my final version here I actually just used the bare Atmega 328P chip (together with a 16MHz crystal and capacitors) instead of an Arduino UNO. The voltage regulator on the UNO is not necessary here since the Arduino is directly using the 5V from our power supply anyways. The only loss is that we now have to use a separate USB-to-serial converter (FTDI or similar) to talk to the Atmega. The overall look of that fits in much better with the rest of the breadboard computer:

Another optimization is to remove the bootloader from the Arduino/Atmega. That gets rid of the 2 second delay while the Arduino bootloader starts up. I will post instructions on how to do that if people are interested. Let me know in the comments!

The Arduino sketch for the Breadboard Computer Programmer
https://github.com/dhansel/programmer 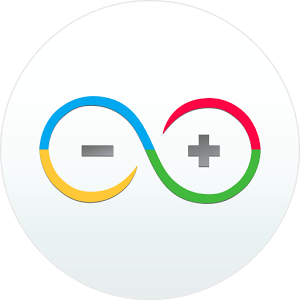 We are going to learn a technique for building gesture-controlled laptops or computers using the power of Arduino and Python.

How to make your project from breadboard to prime time using Upverter.