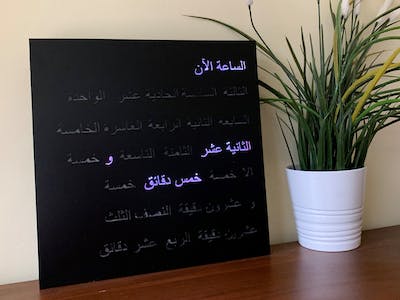 A unique and stylish timekeeping ornamental use for the Arduino. 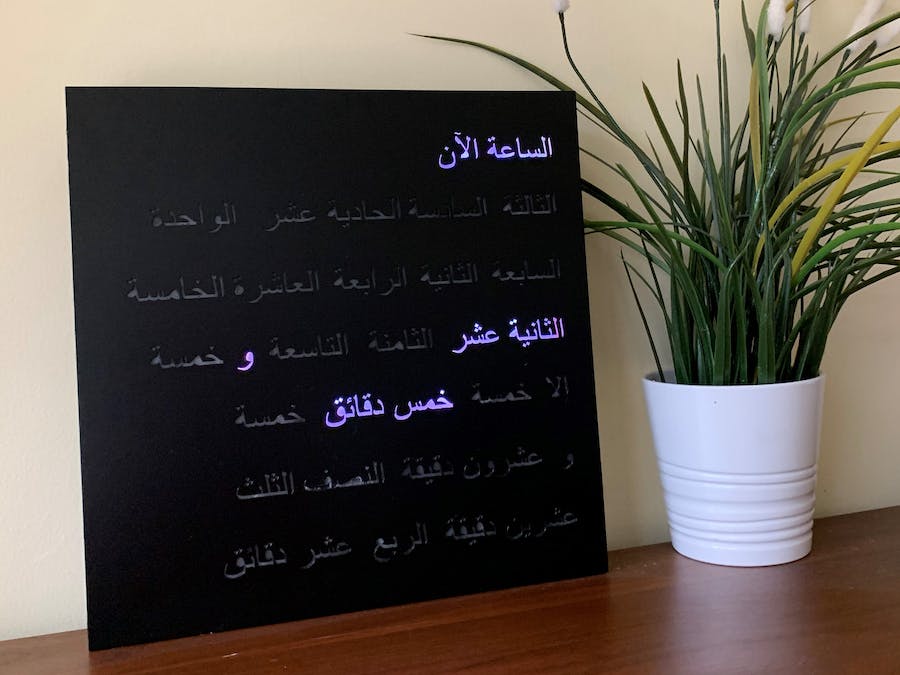 A unique and stylish timekeeping ornamental use for the Arduino.

The Arabic word clock is powered by an Arduino using a real-time clock, individually addressable LEDs, with a laser cut metal and painted face plate. The time can be set either using a IR remote control or via buttons discreetly positioned at the back.

The clocks starts as a 3mm laser cut piece of steel which is then wet sanded and spray painted in a colour of choice.

Behind the metal face place are cut Perspex strips which enable the LED to illuminate each word consistently. Thin wood stips seperate each word preventing it from being lit by the word next to it.

A picture frame is used to enclose all of the components and give it a high quality finish. The frame and faceplate can be selected based upon the decore you wish complement. This clock has a deep black matt finish.

The Arduino has a prototype shield with a simple circuit to integrate the individually addressable LEDs and the realtime clock.

Once the LED strips are put in place they are tested with each word individually lit (red, blue, green, then all together to form white). The user can select the LEDs colour and brightness. A simple infrared remote control can be used to set the LED preferences as well as the time.

Think black matt foam is used to cover each word 'box' again ensuring light does not bleed into a non-lit word. The real-time clock battery and Arduino a accessible for maintenance such as firmware updates.

The matt black wooden back of the photo frame then covers and encases the clock. This version has a set of buttons to set the LED brightness, colour and time. The Arduino is powered by a wall charger via its DC barrel.

The buttons and remote control design can be selected, these were purchased on eBay to test with.

Time take to assemble the clock is around five hours.

This is a simple clock that tells time in words.

An Arduino based word clock that tells the day of the week, the month, day and year and the time to the minute in words.