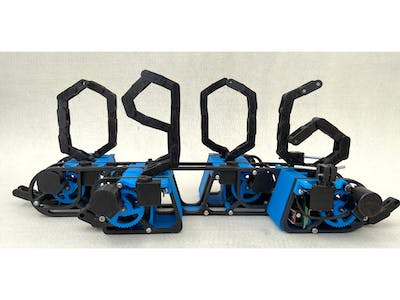 Project in progress by ekaggrat 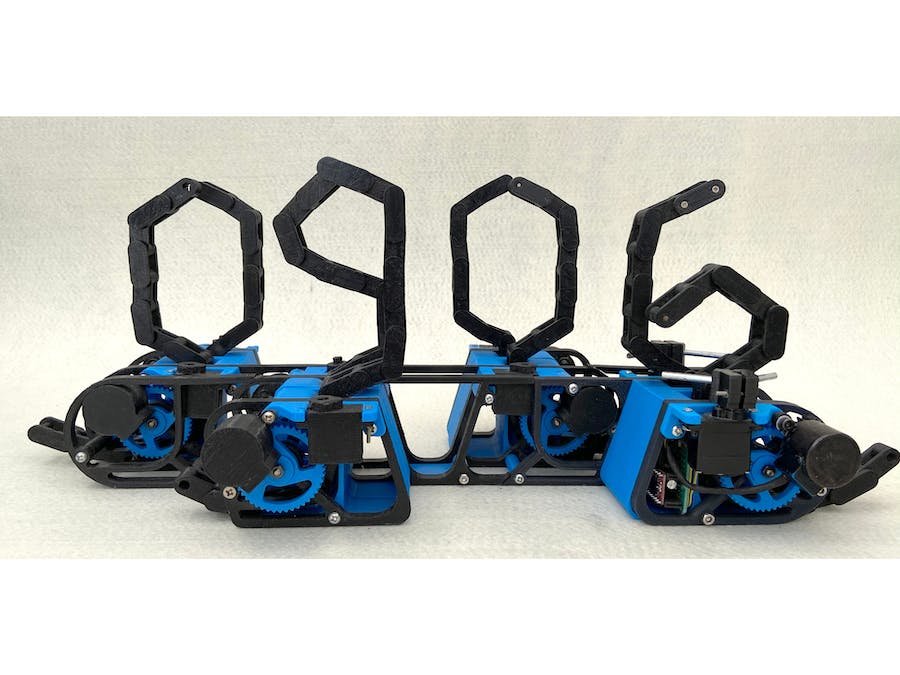 A Bicycle chain lying randomly on the street gave inspiration for this art work. The simple idea of creating numericals out of a continuous chain quickly turned into a complex beast. The chain is made out of 3d printed linkages to keep the weight low with rubberized frictional joints to retain the position they are left in. Each digit consists of two chains as its is hard to maintain the shape of the letters with a long one piece chain. The chains are pushed forward by stepper motors and then bent into shape using servo motors. Four such digits make up the entire clock.

how the clock works

The clock consists of 4 independent modules which work in sync to display the time. Each module consists of 2 28byj48 stepper motors and 2 9g metal gear servos. The stepper motors push the chains out one segment at a time and the servos bend them according to each digit. The chains home to know positions using magnets and hall sensors in the tips of the chains at the beginning of each digit. Currently I have only one of the digits working but eventually will get them all to work. One of the module consists of an additional ds1304 module to take care of the time and coordinate the rest over the serial link.

the initial prototype were uses to figure out the chain and its form keeping friction. Lots of shapes simply failed and in the end the o-ring worked well.

Project in progress by JaeKar99

Replacing the old and expensive mechanical system with the much reliable and cheap electrical system!

A cool digital clock which sports the 7 segment display. With its bright red display will make sure you like to keep an eye at the time.

An artistic alarm clock that uses and array of 7-segment displays to display large digits in a unique way.