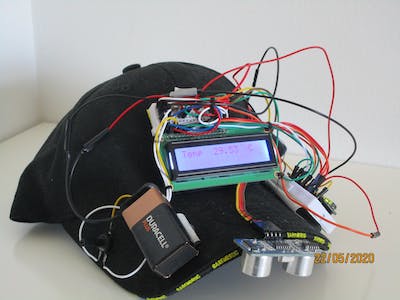 Designed to prevent the Coronavirus, it senses your body temperature and detects when your hand is touching your face. 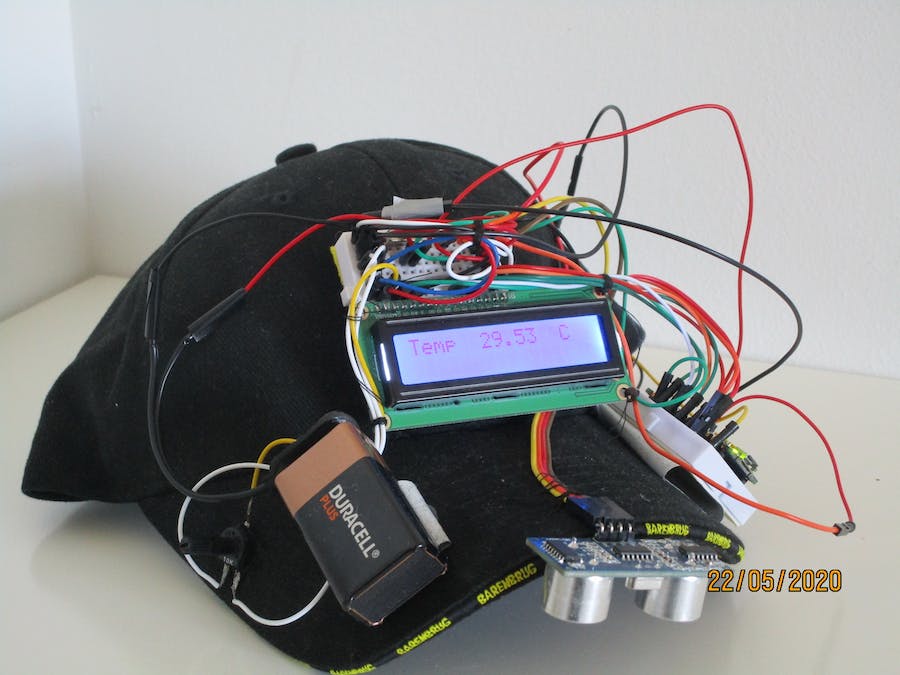 Designed to prevent the Coronavirus, it senses your body temperature and detects when your hand is touching your face.

CoronaCap is a helpful tool designed to prevent the Coronavirus. It has a temperature sensor in the front that senses your body temperature and an ultrasonic sensor that detects when your hand is closse to your face, and when you put your had close to it, a LED lights up in your peripheral vision to remind you that you shouldn't tuch your face. An LCD display shows your body temperture in Celsius, and youcan change the code so that it's converted to Farenheight. All the comonents are sowed to the cap and cables are soldered to componets.

The arduino controlling it is an Arduino Nano Every, because it's the most suitable (works with 5V, compact size...). It is powered by a 9V battery.

When assembling it, I have tried to show the temperture with a LED Matrix and a 4 digit 7 segment display. But those where eighter too had to program, or occupied too mny pins on the Arduino. Originally, the cap was managed with an Arduino Mega 2560, but it as too big for the cap.

CoronaCap is a DIY cheap solition to help prevent COVID 19, with simple components many people have at home.

In the Arduino IDE, I have used two libraries:

-The liquidCrystal library, to control the LCD display.

So, about ardware. I've chosen the Arduino Nano Every because it isn' expesive, it's small, powerful, and most importantly, runs at 5V. Why 5V and not 3.3V? Simple: The HC-SR04 ultranonic sensor usually works at 5V, and won't work at 3.3V. If you happen to have a 3.3V sensor, I encourage you to use it. That a you can use it with IoT applications, and make it do cooler stuff, like vibrating your phone.

Besides the arduino, we have 2 sensors:

-It uses the ultrasonic sensor mentioned before,

-And a thermsistor, to mesure your body temperature. It's at the front of the cap, and it touches your forehead to measure temperatre. It's straped in a way that you can't even feel it, but you may want to be careful when you put it on, and be sure there is no hair in the way.

-An LED. When you put your hand to your face, it lights up in your peripheral vision to remind you that you shouldn't. It is a silent and effective way of reminding you. You can also use other methods, such as a vibration motor.

-And the LCD Display. It can show messages, as well as reading your body temperature. That way, people who is around you know it's safe to be nearby.

Aditionaly, It's powered by a 9V Battery, and a battery connector conected to the VIN Input in the Arduino. It also has a swithc, to turn it on and off easily, as having to disconnect it manually isn' very sthetic.

Most of the components are sewed onto the cap, except the tricky ones, like the mini breadboard, are glued in with hot glue.

Download
Fritzing File. It has both connections for Mega and Arduino Nano Every.
coronacap_24TRi4I4g7.fzz

Download
It contains schematics for CoronaCap with nano every and mega
coronacap_UzYsU8uPl5.fzz