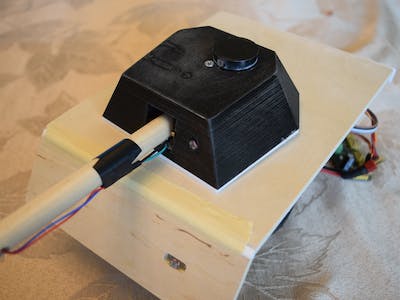 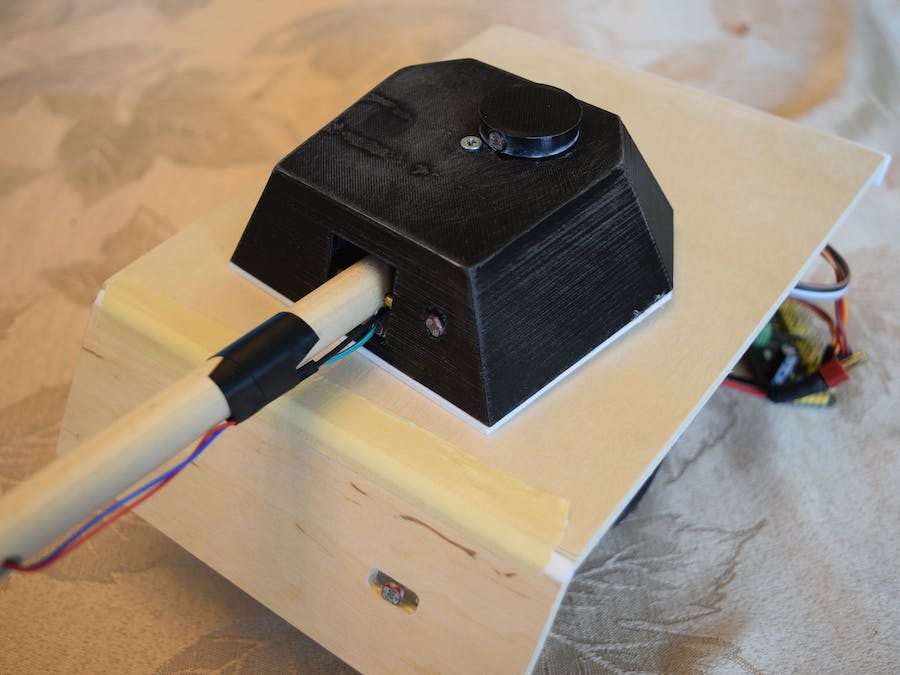 Recently I created a Laser Shootin' Robot that was able to drive around and had a laser that was fixed in place. This is part 2 of my Tanks in Real Life project series. This time, I took the chassis and added a hull and turret that could both move.

I began by 3D printing the necessary parts: 4 hull supports, 4 hull mounting components, the upper turret, the lower turret, and the cupola. I used 4- 3mm x 12mm machine screws to attach the hull supports to the chassis. A brass rod goes across each pair of supports. I then glued the 4 hull mounting components into 2 pairs that align with the hull supports. These attach onto the hull I CNC routed. This will allow for the hull to drop and attach into place on the tank, enabling greater modularity.

The barrel on the tank is a 3/4" dowel. It is quite heavy for a micro servo to handle, so I decided to use a lever mechanism to move it. For elevation, the servo moves the opposite way, and vice-versa. I put a hole about 1" deep on the end of the barrel to accommodate the laser diode. The wires for the laser run underneath as to not hinder any movements. I glued the servo onto the lower turret plate facing the cutout. A cotter pin was added between the barrel and servo horn to create the hinge point.

My friend AceofAces16 helped to design the turret and body. Find him at this link: https://www.hackster.io/AceOfAces16

In my previous project Laser Shootin' Tank project, I detailed how to make the chassis move and the laser fire. Those electronics remain the same, except for one part. The Raspberry Pi isn't a microcontroller, but instead a microprocessor. This means it can't time pulses accurately, which causes servos to jitter about and draw large amounts of current. In order to save GPIO pins, I opted to use the I2C PCA 9685, which can output up to 16 channels of PWM pulses, all with just 2 wires! The turret drive servo connects to channel 0, and the barrel servo connects to channel 1. I then connected the PCA 9685 to the Pi by connecting SDA to SDA and SCL to SCL, along with GND to GND and VCC to 3.3V. DO NOT CONNECT 3.3V TO V+, as V+ is for SERVO power, not IC power.

A controller can have the best electronics, but without good ergonomics and looks it is nothing. I designed the controller body to look like a tank, with curves on the back and a frontal slope. It has a separate compartment for a 7.4V 1300 mAh LiPo battery. I 3D printed the back and front, along with the battery compartment. I CNC routed the lower plate and added a hinge so it can open, exposing the battery compartment.

I began by taking a 6x4cm perf board and soldering two female headers the size of an Arduino Nano to the board. Next, I soldered the two joysticks to +5V, GND, A0, A1, A2, and A3. Joystick X axis pins go to even-numbered analog pins, and the Y axis go to odd-numbered analog pins. I decided on using an I2C LCD to reduce the number of pins needed. The LCD connects via +5V, GND, A4 for data, and A5 for clock. Finally, a simple tact switch attaches to D2 and GND. This will be a "fire" button that controls the laser.

Load up the code onto both the Arduino Nano and the Raspberry Pi Zero W. Make sure to include the needed libraries, such as "Timer" for the Nano which can be found here. You also need to put car.py into the same folder as rc_car_main.py. Adafruit provides a PCA 9685 library that is used to control the servos. Additionally, you must pair and bind the HC-05 to the Pi. The HC-05 must be on in order to pair and scan. Using the terminal via SSH, you can do all of this. First, type sudo bluetoothctl, then agent on, then default-agent, then scan on, then scan off, after HC-05 appears and finally pair MAC_OF_HC05 1234. Type "exit" and then sudo rfcomm bind /dev/rfcomm3 MAC_OF_HC05. If you ever forget the MAC address, just type hcitool scan and then copy/paste the address. Now, type sudo python2 path/to/folder/rc_car_main.py to run the program.

That's it! Now you can fire a laser from a replica Panther. You can let your cat play around with it by driving it and moving the turret.

Put this in the same folder as "rc_car_main.py"

Run this with sudo python2 <filename> 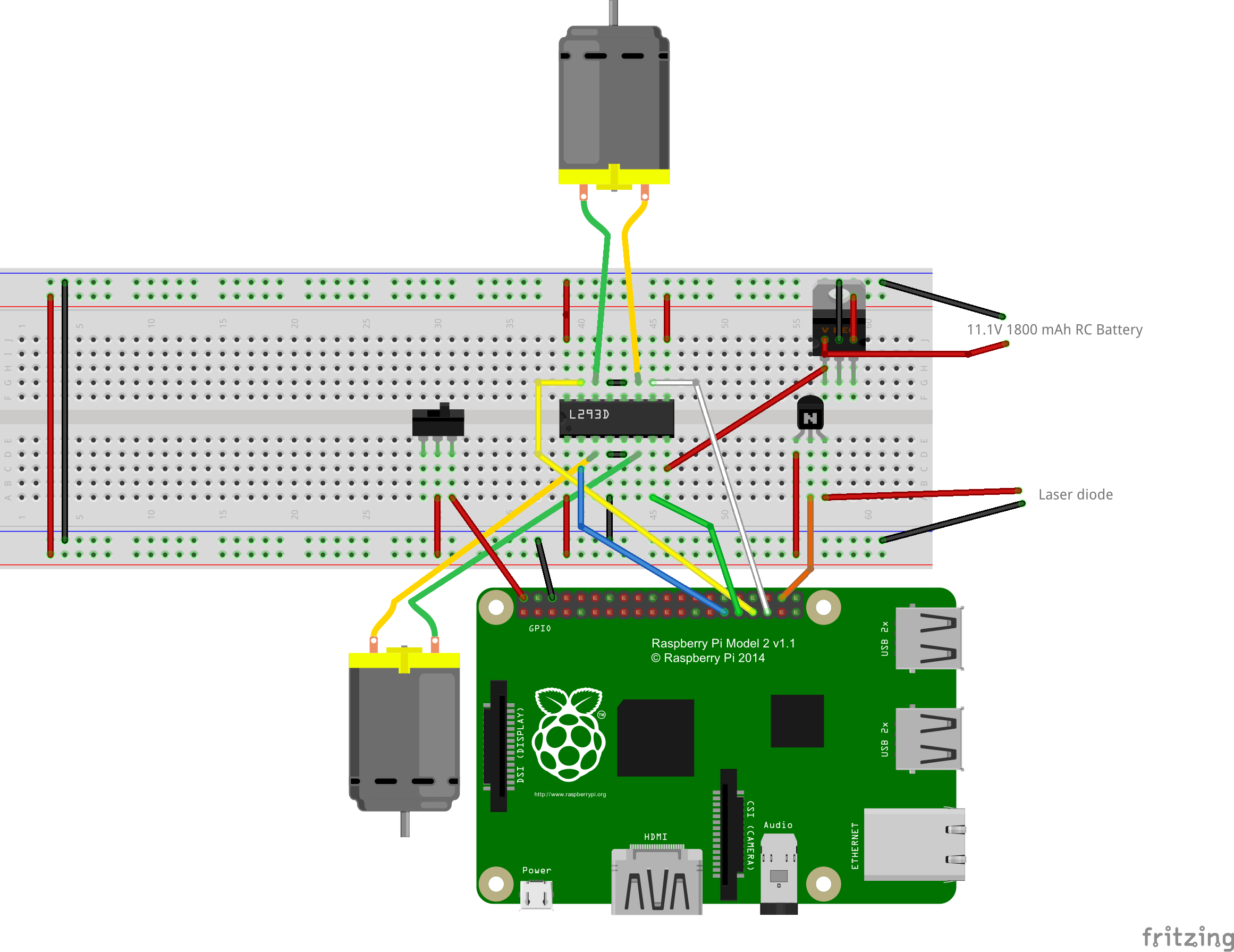 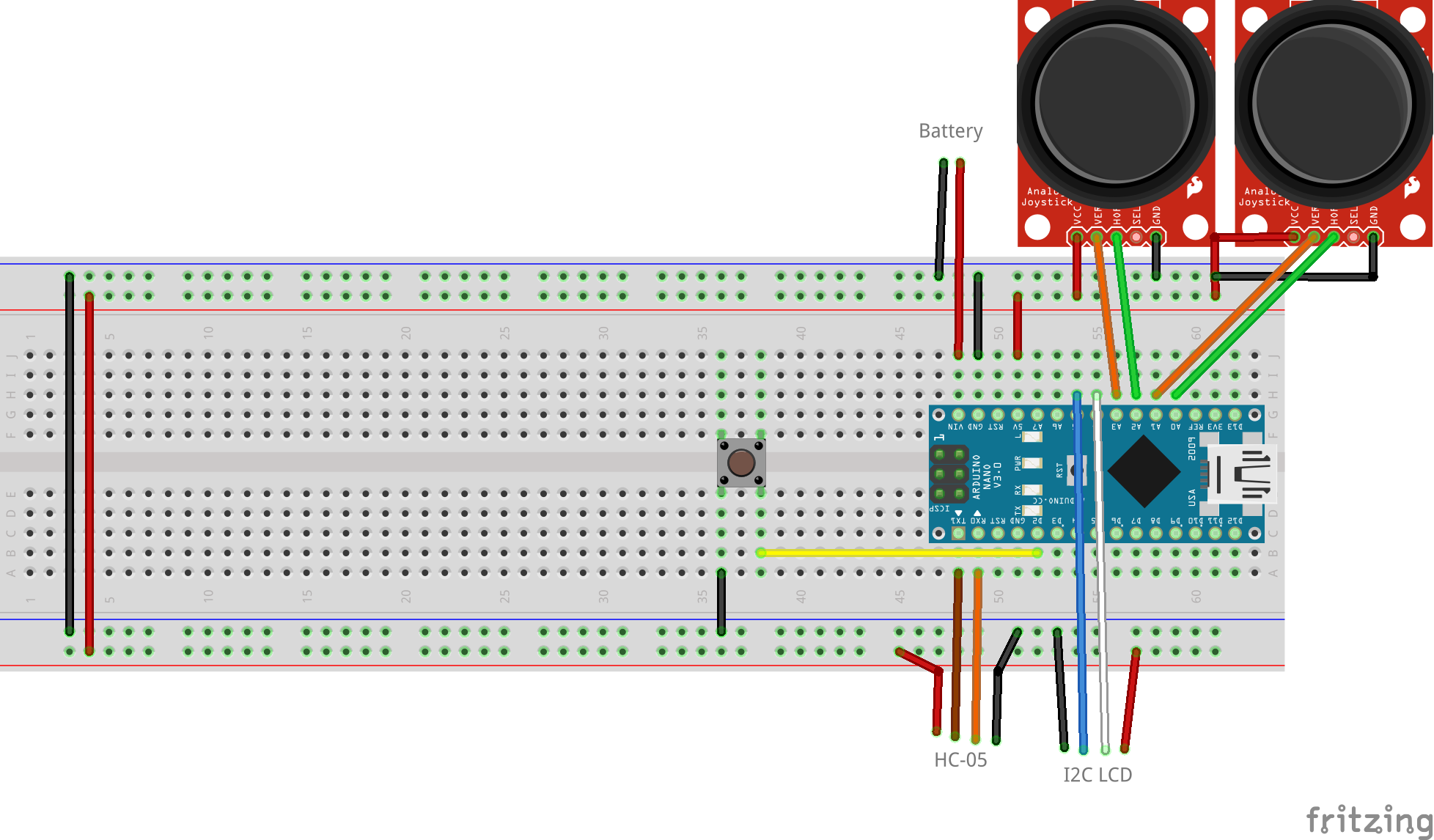 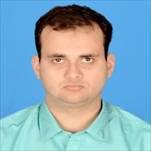 Use a DFRobot MiniQ chassis with Raspberry Pi Zero W to create a robot that can shoot a laser at anything you choose! (Not at eyes, please.)

The tank that will follow you and serve you beer. Coolness is over 9000!