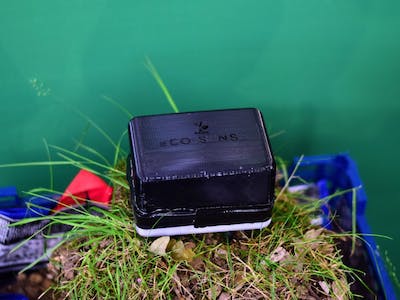 We aim to provide a low-cost precision agriculture solution powered by biophotovoltaics, and we start with developing a prototype.

Project in progress by eCO-SENSE 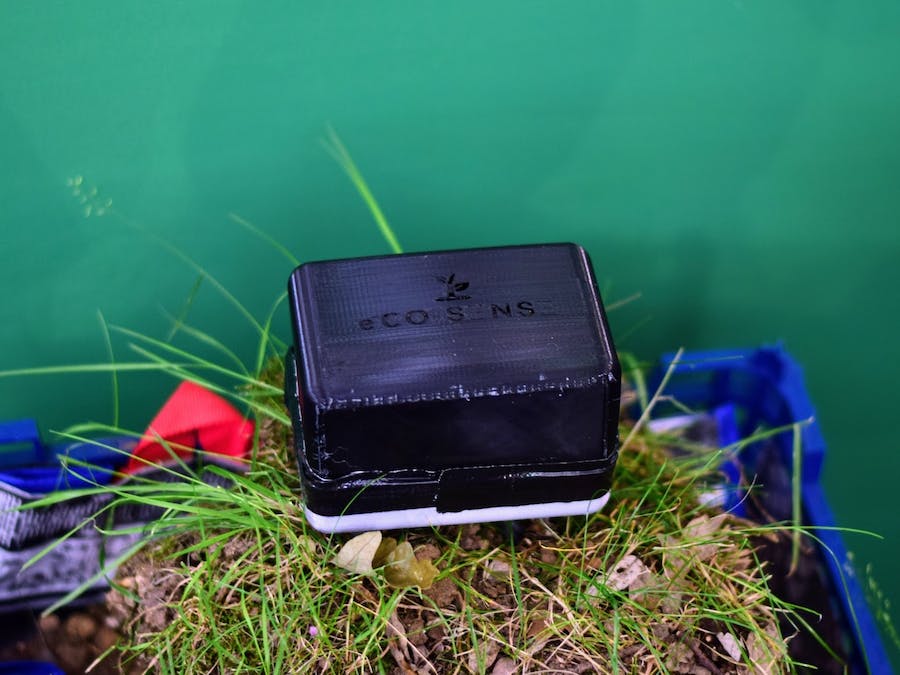 We aim to provide a low-cost precision agriculture solution powered by biophotovoltaics, and we start with developing a prototype.

Using a unique power source, where we are able to draw power from the growth of the plants themselves, we aim to provide a low-cost sensor infrastructure to empower farmers with precision agriculture technology.

The goals of this project are to:

1) Identify key soil parameters to be measured: this can inform farmers on further actions they can take to help improve soil health and yields.

2) Develop a low-cost, low-powered soil sensing architecture: current precision agriculture solutions are expensive and out-of-reach to many farmers in the developing world.

4) Develop the sensing kit such that it can be deployed remotely: This requires a sturdy outer casing that shields the system from the elements.

5) Develop a way to store and display the data: the end-goal would be to provide recommended actions that a farmer can take based on the sensor measurements.

We are working together with Dr Paolo Bombelli from the University of Cambridge to use the novel technology that he's developing so that we can eventually power our sensors in-situ via the growth of the plants themselves.

Linking up the biophotovoltaic cell with our sensors remains as work-in-progress, and currently we are still sticking with powering our sensors via traditional battery cells.

Key Soil Parameters to Be Measured

Eventually we could be able to measure many more parameters, but, as a start, we wanted to focus on a few key parameters.

The soil parameters we decided to measure are:

Assembling the Sensors Together

We started off with an Arduino Uno board, together with a breadboard to connect all the sensors to it.

For temperature, we decided to use the DHT-22 sensor.

The connections used for this project were:

(An additional output from the DHT-22 sensor is humidity)

For soil moisture, we used the FC-28 Soil Moisture probe.

The connections used for this project were:

Note that calibration is needed for this sensor: we measured the output values in moisture-saturated (100%) soil as well as dry soil (0%), and put these values in the Arduino Sketch (refer to attached example Arduino Sketch code). The final output will then be soil moisture given as a percentage from 0 to 100%.

For gas flux measurements, we used the SGP30 gas sensor.

The circuit connections used are:

Note that we soldered pins into the holes of the sensor and then connected the sensor on the breadboard.

This gas sensor outputs a Total Volatile Organic Compound (TVOC) reading and an equivalent carbon dioxide reading (eCO2). We have decided to use just the eCO2 output.

Remote Transmission of Data - via Bluetooth

Eventually, we wish to utilise LoRoWAN for wireless transmission of data. However, for a proof-of-concept, we utilise Bluetooth transmission capabilities instead. We use the nRF8001 Bluefruit LE Breakout component for this.

The circuit connections used are:

Note that pins were also soldered onto the chip to enable easy connection with the breadboard.

One of the advantages of this bluetooth module over others is the ease of displaying the sensor data via a mobile app.

See below for a full circuit schematic with all the connections.

To enable deployment in the fields for long periods of time, we designed a protective casing for the whole sensor unit.

One other consideration for accurate gas sensor usage was allowing the gas to escape instead of building up within the casing. To do so, we inserted some ventilation holes on the sides. (The idea being that if it rained, then water would at least not seep in through the top if the holes were on the sides)

Eventually, we wish to be able to provide full data interpretation services, where we can give recommended actions based on the sensor measurements.

For a first proof-of-concept, we output the raw data.

We utilise the Adafruit bluetooth app.

We output Temperature (degrees Celsius), eCO2 (parts per million, ppm) and Moisture (in percentage of soil moisture). An additional field we output is ambient humidity (in percentage). We are able to capture real-time data and we can adjust the time interval for receiving data as well.

As mentioned earlier, Skopp et al. (1990) suggested that there exists an optimum soil moisture content for microbial activity, which can be proxied by the amount of gas flux from the soil. However, the general relationship in dependent on many factors, such as soil type as well as weather parameters.

An updated model suggested by Yan et al. (2018) includes parameterisations which allow us to account for soil type variations. Using this model, we are then able to obtain a theoretical relationship between moisture content and microbial respiration rate for various soil types.

As a first step, using this model, we are able to use the soil moisture sensor's data output to determine how far the soil moisture is away from the optimum content. If the moisture content is lower than optimal, this would be a signal to add more water to the soil, and vice versa.

The next steps would be to:

- Conduct field studies to measure the actual relationship between gas flux (using the gas sensor's data output) and soil moisture content for different types of soil and weather conditions, to refine the theoretical model to suit our purposes

- Expand the model to include an irrigation parameterisation, so that we can recommend how much more/less water to add to reach the optimal level

- Expand the model to include other factors relevant to soil health (e.g. fertiliser content)

In the long-term, we intended to power the hardware platform by means of a biophotovoltaic cell (BPV), a novel technology than can generate currents (i.e. electricity) through the growth of the plants themselves. In the first step, we considered the power consumption of our device versus the power generation of a commercial BPV. We measured the power consumption of our low-power device to be approximately 300 mW. A commercial BPV can supply 2 mW of power. In consequence, an intermediate charge-storage is necessary. We choose a supercapacitor due the robustness and long life-time. A proof-of-concept experiement demonstrated that we can charge-up a supercapacitor (1 F, 7.5 Vmax) with a potentiostat (as a model for the BPV) to 7.5 V, and then release the charges until the voltage drops to 3.3 V, the lowest operating voltage of the Arduino hardware. The device ran for 1 min 30s on power supplied solely by the supercapacitor - a sufficient time for starting-up, measuring the data, averaging and transmission to our backend network. The next steps include building a custom PCB that automates the switching between charging and discharging cycles. We then aim to integrate an acutal BPV for charging up the supercapacitor.

Here are some of the things that's still work-in-progress in the near-future:

We then eventually hope to do some pilot testing in the UK, in particular to get some real-world data on different crop/soil types in order to build our recommendations engine. 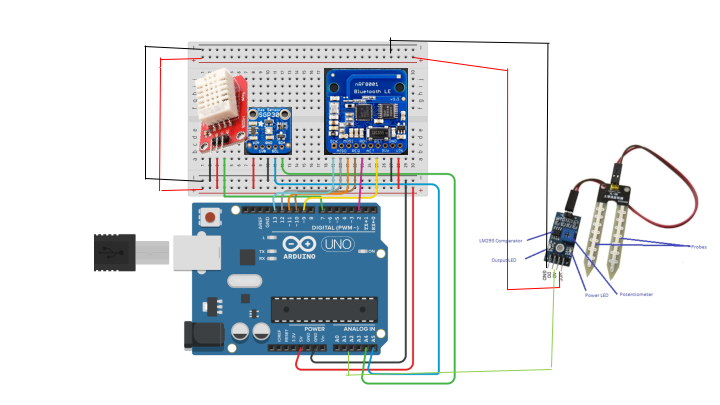 Project in progress by adamneareva and Fabio Cardoso

This project will calculate the water content of soil around a plant by measuring the dielectric constant.

This project will show you how to make an automated watering system and water level indicator.

Project in progress by Saikan45