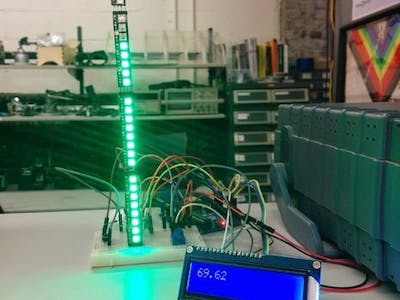 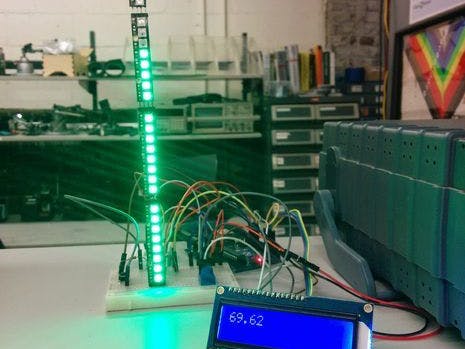 Hello! This is a quick, intermediate Arduino project that takes a temperature reading from a TMP36 , reads it onto an LCD screen and gives an "Analog" readout on a Neopixel stick that changes color and number of lights lit every 10 degrees Fahrenheit. It's easily customizable as NeoPixels can be coded in many ways so the NeoPixel stick can change size and colors every which way a maker would want it to.

For this build you will need an Arduino (any one will do, I used Uno), NeoPixels (can be found here) an LCD screen (I used this one) a TMP36 sensor (or comparable, I used this inexpensive one from Adafruit ) a 1k ohm resistor, a 470 ohm resistor, a potentiometer, a simple momentary switch, F to M jumper wires (for the LCD) and M to M Jumpers (for everything else) and a breadboard.

From the fritzing diagram the circuit looks a little confusing but it's actually relatively simple. What is important to take note is you're going to want the TMP36 on a separate circuit from the rest of the project because some noise that's caused by the Pixels messes up the voltage readout from the TMP36 and in turn the temperature reading. When it comes to the Pixels a bit a soldering is going to have to happen. You're going to want to use 4 plain, everyday headers, and solder them directly onto the NeoPixel stick. It's absolutely imperative that you get the pin out correct on this otherwise you'll have to de and resolder the headers and trust me, the copper pads on the NeoPixels do not like being resoldered and while NeoPixels are not the most expensive component in the world, several sticks that are rendered unusable because the copper pads have been taken off add up very quickly. To solder you will want a good iron and a solder with a thin gauge. A pair of "third hands" are especially useful in this project as the headers can be tricky to solder onto the stick straight if the stick is lying on the table.

I included a photo with the proper pin order, the side with "DIN" goes to the breadboard/Arduino and the side "DOUT" goes to other pixels or just the air. You can use any number of NeoPixels, the one at the Studio has 4 sticks for an especially prominent read out that would be ideal if you were to enclose it in a laser cut acrylic display (possibly stay tuned). On the other hand, and as seen in one of the photos, I have a smaller one using only one stick that works just fine at home that you could then also turn into a wall mounted display with a very quick enclosure. That's one of the things with NeoPixels that make them great, it doesn't take much code to make them fit almost any size or form factor.

The pin out from the Arduino goes as follows:

The rest of the circuit is pretty self explanatory and clear on the Fritzing Diagram, just remember to keep the TMP36 and Primary circuits separate.

Attached to this is a file with the Arduino code. It can be broken up into three parts.

First you have the main method that goes from line 1 to line 61 and includes the setup, loop, and any imports, variables, and function calls you may need. This is the skeleton that puts all the code together to make it function. You're going to want to download and import the NeoPixel library (found here) and the LiquidCrystal library that should be already included with the Arduino software.

Second you have the function double tempMeasure starting from line 64 and going until 79. This is the code that takes the voltage that the TMP36 is reading and translates it, using some quick math, into a temperature readout and then returns that readout to the main method. This is where it's important to note why we have the TMP36 attached to the 3.3V and AREF pins. How the TMP36 works is it takes a voltage reading between two points that, because of a change in resistance from temperature, can then take very very very accurate temperature readings. In the code we have it to 2 decimal points but if you wanted to you could get the full 64 bit Decimal that would go into the thousandths, ten thousandths, hundred thousandths, what have you. That readout would be interesting but also a bit unwieldy for the purposes of this project. That voltage reading is then fed through a conversion that divides by 1024 (10 bits, the mapping Arduino uses) and then converts that using 10 mV per degree with a 500 mV offset. What is returned is an incredibly accurate temperature reading in Celsius which is then converted to Fahrenheit in the main method.

Third you have the function void pixelCasef that runs from line 81 to 158. This is the code that controls the NeoPixel readout with a series of If Else statements and for loops that work in ~10 (for noise tolerance) degree Fahrenheit increments that change color and height of pixels lit. This is where you change the code to behave differently with different number of sticks. To customize you just go to each of these for loops and switch out numbers. The number in the loop statement (i.e for(int i = 0; i <= 16; i++)) is the number you change for the number of pixels lit and the number in the body of the for loop (i.e. strip.setPixelColor(i,strip.Color(0,0,255));) changes color of the pixels lit.

Remember to take a really good look at the code to fully understand what's going on before compiling it.

Step 4: Plug it in and Light it Up

With the circuit and the code in place you should have a working thermometer. It's especially handy to have around the house in the winter and summer when you're trying to save energy, and it's a fun project and great introduction to NeoPixels. The versatility with the pixels alone should provide plenty of ideas and since it uses the same libraries this will work with almost any other NeoPixel type such as ring, matrix, strips, etc. The best part is it takes very little power and can easily be plugged in with a USB phone charger (with proper USB cord) or even batteries (a 9V battery will do nicely and two coin cells at 6V is even better).

If you're ever in the Philadelphia area don't forget to look us up and visit the shop. We provide tours Monday through Friday from 2 to 6 without appointment and with appointment at any other time of the week. Hope you enjoyed the Instructable and happy making, cheers!

Makes use of a thermistor to display a colour on an RGB LED (One Pixel).

Outside Thermometer with Trend, Max and Min Temperature

I'm going to show you how to make an LCD thermometer with an Arduino UNO and a LM35/36 analog temperature sensor.

A WiFi controlled NeoPixel display. Designed for the MKR1000 but should work for the Zero too. A little rough around the edges but works!