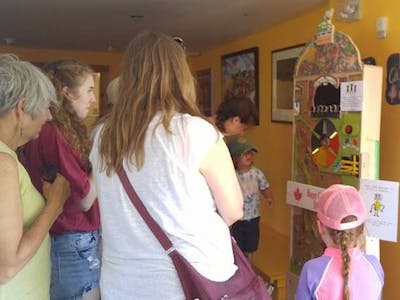 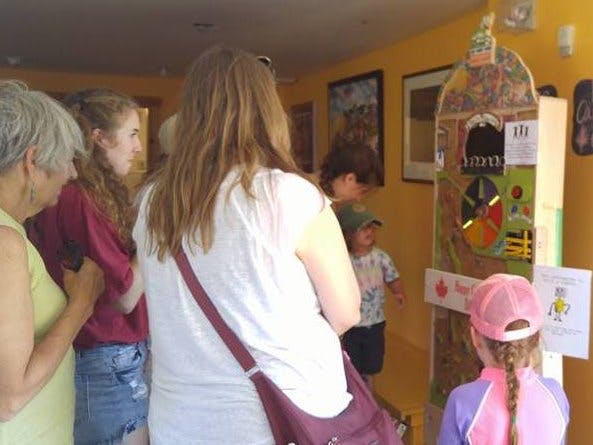 My former FLL team, the Flying Manatees, decided they wished to continue their STEAM work after aging out of the FIRST Lego League robotics competition. We brainstormed for awhile and finally focused on creating a new interactive donation box for the Ross Creek Centre for the Arts [a place near and dear to all our hearts].

The donation box would accept both coins and bills. It would reward the donor by adding a piece to a collaborative video art display created with Processing and powered by a Raspberry Pi. The path of the coin would select the shape and colour to be added. If they donated a bill, they could then select the shape and colour that would be added to the dynamic video. It would be fun, entice donors to reflect on the Centre's value and Mission. Here is a look at the build and the final piece.

My projects are generally larger scale with multiple systems and some arty components. As such, I rarely do the "full instruction" kind of project share. However, I am very open to answering specific questions left in comments about how/why I may have done something seen in the project posted here. I hope to inspire and possibly assist with these project showcases, so please feel free to post your comments/questions and I will do my best to address them.

The twins worked primarily on the art and design aspects as well as the Lego bill mechanism. Jonah, the younger Manatee, is the chief CodeMonkey and did ALL the coding for the Arduino, RPi and the Processing sketch for the video art, I was the engineer [see below].

Here is a video of it in action during a bill donation.

Here is one of it taking a coin donation. We were having some problems with the HDMI display. The SVGA to HDMI adapter wasn't working right. The video display is an older computer monitor we scavenged and hooked up to the RPi.

Here are some more pics of the build.

I hope to write a mini-tutorial on how I made the many "switches" for the coin slots using copper tape. This is a pic of an early test setup.

The Manatees wanted some Lego in the build to reflect their FLL roots. The bill mechanism was their solution.

The donation box has been a big hit and pulled in a good deal of cash for the Centre. A great build with a great team.

The Ross Creek Centre for the Arts is located near Canning, Nova Scotia.

An LCD buddy that reacts to you!

The Wheel magically turns & dispenses the worst fates from all your favourite fairy tales. Complete with sound, lights and mythic automata.