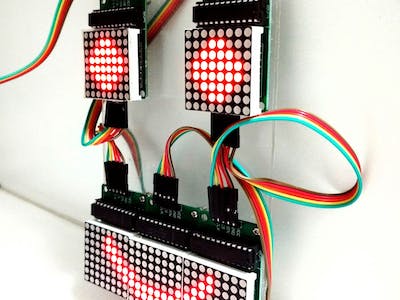 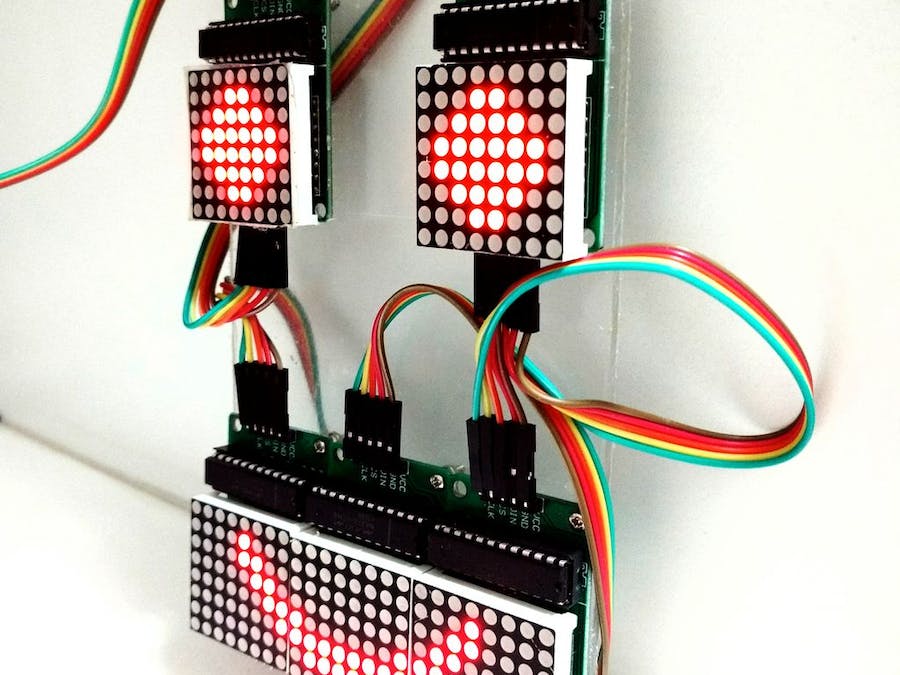 This project shows how to control an array of 8x8 LED matrices using an Arduino Uno. This guide might be used to create a simple (and relatively cheap display) for your own projects. This way you might display letters, numbers or custom animations.

A 5 matrix array used in one of our robot projects ("Robô da Alegria") is used as an example to illustrate this technology. You might be interested in learning more about this project in the following links:

The number of components may vary according to the structure you have in mind.

Connect all the components according to the schematic. You'll need some jumper wires to connect the first matrix to the Arduino, and each matrix to the next one on the array.

You might also want to arrange each display in a given position. For that you might use the acrylic sheet, some screws and nuts (four for each display) and place each component in position. No tool is needed to assemble the circuit, but you will need a screwdriver if you wish attach the displays to a surface. In our example, five displays were placed in a face pattern (two eyes and a mouth). Plug the USB cable to the Arduino Uno board and proceed to the next step.

With the latest Arduino IDE version installed, add the LedControl.h library, which is used to control the LEDs. Download, compile and upload Arduino the code, which is divided in 4 parts:

setIntensity was used to limit LEDs brightness. It was set as 1 (in a scale from 0 to 15) in order to reduce the power consumption of the modules to a level acceptable by the USB port.

After the upload keep the Arduino connected to the USB port of your computer and open the Serial Monitor. The code is programmed to display a set of emoticons on the LED face, depending on the message received by the serial port. The following commands were configured:

Type a pair of characters (on for the eyes and other for the mouth) in the serial monitor, press enter and the displays will be updated according to your command.

You might change the drawings (add new faces for instance) or change the control method (including a Bluetooth or Wi-Fi interface), according to your needs. 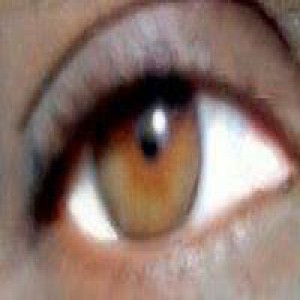 An overview of the 8x8 LED Matrix with a HT16K33 backpack. I will go from wiring to having some fun with it.