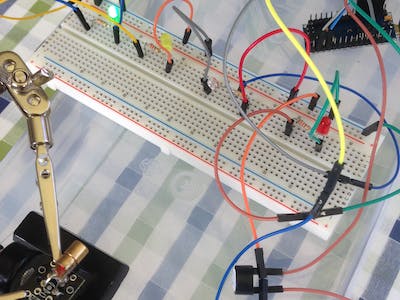 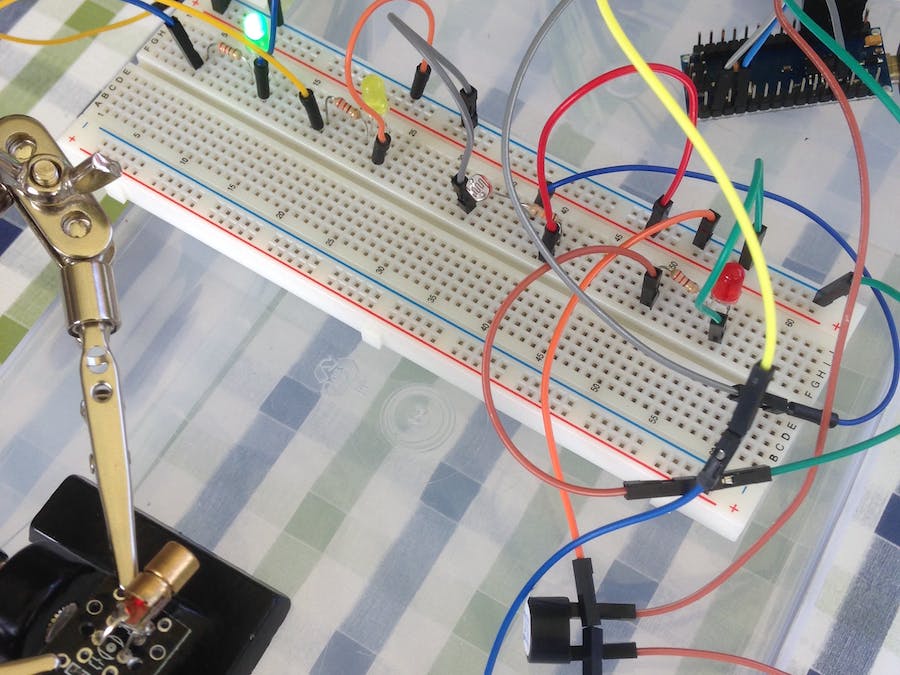 A small company for plastic injection molding has produced over 6000 articles for a refrigerator branding. It was then necessary to find out whether the entire batch could be handed over to the customer, or whether there were articles which did not comply with the specifications, and were to be sorted out.

For this purpose, favorable employees had been hired: they took the articles individually into their hands and assessed the standard with analog measurement methods.

A photocell can also be used in the area of ​​censuses and alarm systems.

Here is the implementation in detail: the laser beam is switched permanently and hits a photo-resistor. The values ​​read by the photoresistor can be evaluated and corresponding triggers for the switching of LEDs and buzzer can be used.

If you play with the construction, you can also try a marble to break the photo-resistors. You can also use a mirror to direct the laser beam around the corner. Here, many applications are conceivable.

You can use the serial monitor to check the determined values and adjust the two threshold values according to your requirements. A counter is also carried along: after all, the number of the committee at the end of the quality inspection (or the number of visitors to an event or the crossing of bees before a beehive) is of interest.

The influence of ambient light on the photoresistor could not be ascertained in the experimental setup: it constantly measured values whether in a bright or darkened room. A check, whether a short distance, also many meters with the laser beam could be bridged did not take place: presumably stands nothing in the way. The shining of neighbor's plot several meters away in the night on his white wall worked well. Note that you will not perceive the transmitted light from the laser on the track to the photo-resist as such.

I am very glad that my first test with a laser (here I had annoyed my cat, check point F.) has now led to a meaningful purpose.

Like my description? You will find more under my account. Follow me to be notified when I publish new projects! Here is my Paypal link. You can also send me sensors, which I like to look at sometimes.

Showcasing our spot welder, which is controlled by an Arduino Nano.

A simple way to control a motor with a potentiometer and an Arduino.

Project is showing simple stopwatch with start, stop and restart. It's a great project for learning how to use LCD with Arduino UNO or NANO.