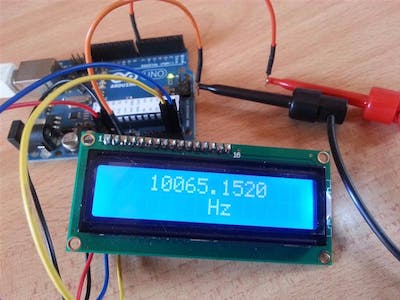 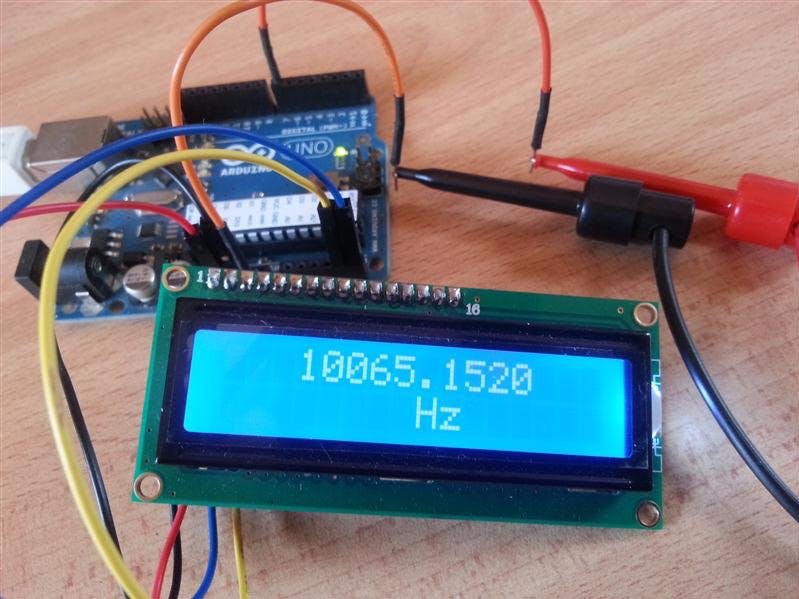 Recently, a friend of mine had an issue with his car’s ECU and needed a frequency counting device. The solution was a device to determine the pulse frequency emitted by the ECU against the rev counter. So, the device had to have the ability to read digital pulses, between 1V – 5V, which are then interpreted by a digital pin on the Arduino as HIGH and LOW pulses. Then outputs the frequency in Hz/kHz on the LCD display.

I had bought a 16×2 LCD and never actually done anything with it, so it was about time.

The LCD was in the form of a shield compatible with Arduino Uno. I snapped the LCD onto the Arduino and attached a jumper wire to analog pin A5. I am still using digital input in my code but since almost all digital pins were taken by the LCD I’ve decided to utilize an analog pin. Now, the device can be powered via the USB port, the jack pin or the VIN. I am using the VIN here as I had no jack available and I was using the car’s supply (roughly 12V-14V).

If using the LCD shield you can skip this part, but if you don’t have a shield here are the connections that are needed.

Add 10Kohm resistor between +v5 and GND. Plug in the +12V of the battery in Arduino VIN pin and GND of the battery to Arduino GND. Finally the A1 pin jumper wire to the source of the frequency to be measured.

NOTE: In my case both the ECU and the Arduino had their GND connected (at the GND Terminal of the battery).

The sketch is fairly simple. We will display 3 values on screen. The current frequency, the max frequency and the min frequency, updating every second. The min and max are reset every 5 minutes. We are using the LiquidCrystal.h which is included in the Arduino IDE installation, so you don’t need to add anything.

We tested the device using another Arduino (which probably it’s not the best thing to do) and found that up to 50kHz the device had an error of around +/- 3% so it’s actually pretty good. Beyond 50kHz, the error started to rise and became very inaccurate. So our suggestion is to use it only for frequencies under 50kHz.

This project will show how to set up a 16 x 2 LCD screen and display multiple sensor values.