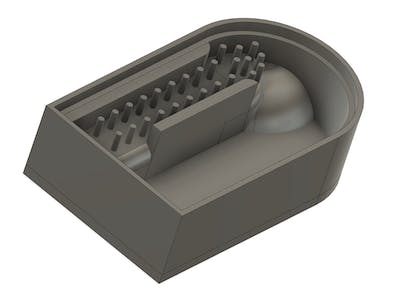 Project in progress by Jim Haseloff 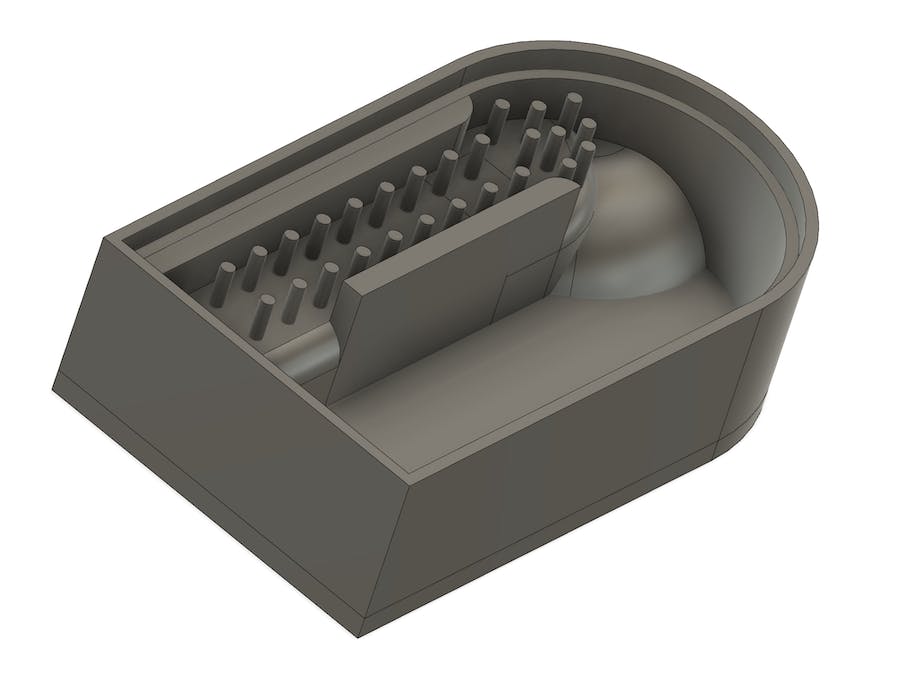 Modern biology has exploited enzymes, which are naturally occurring nano machines, and clever reaction systems to produce an ever growing range of diagnostics, environmental assays, DNA assembly and tools for education and research. Many of these molecular reactions are cheap, but require instrumentation for precise temperature regulation, programmed control over time and quantitative readout. Commercially available instruments are expensive, usually relying on temperature-controlled milled metal blocks and designed for hundreds of samples. For example, the cost of a microplate polymerase chain reaction (PCR) machines will start at around £5, 000, and qPCR machines in the £10, 000's. There are many cases where low cost (<<£100) reactors would be very useful, even if sacrifices were made in the scale of sample numbers or flexibility or speed of temperature control. For example, ultra low-cost reactors would make accessible a new generation of isothermal reactions - for home testing, field applications and international educational efforts.

Air heating/transfer would provide a cheaper and more accessible route to incubator design, compared to the conventional use of heaters attached to milled aluminium blocks. It would also potentially reduce problems with condensation due to temparature differentials inside reaction tubes, and avoid the need for hot-lids - if using small volumes and/or high temperatures.

Further, 3D printing would allow design and low-cost testing of possible solutions - that can include high levels of geometric complexity. One of the challenges with building 3D printed incubators is the prospect of softening or melting of thermoplastics - in our case, we'd ideally like to have a working range of zero to 95 degrees C - to encompass most commonly used DNA procedures.

Carlo Quinonez has pioneered the use of 3D printing techniques to experiment with complex manifolds and flues for microscope-based cell culture incubators - and to ultimately build a high-temperature (190 degrees C) convection oven using heat resistant ULTEM 1010 plastic. Some details of these can be found at: https://studiofathom.com/blog/pyra and https://www.instructables.com/id/Shape-of-things-to-come/

Preliminary trials with simple closed boxes (3D printed with PLA) and forced air circulation with 12 volt - 60 and 70 degree C PTC heaters, which have proved useful up to temperatures of 50 degrees in the incubator. I'm now shifting to use PTC heaters rated at 120 degrees - which put more strain on the power requirements, incubator design and materials. Use at over 60 degrees is not recommended for PLA, but Nylon and ABS are rated to around 95 degrees.

This project aims to explore some of the radical-thinking behind the above-mentioned Pyra project, and to try to incorporate this into a 0-95 degree microtube incubator.

High temperature resistant fans are required for convection heating at elevated temperature ranges. For example, common small computer fans might be rated to 50-60°C maximum. The Noctual Industrial PPC range of computer fans have fibreglass reinforced polyamide construction for both the impeller and the frame. This material can withstand temperatures up to 140°C and makes the fans more robust than Noctua’s standard fibre-glass reinforced PBT fans, and able to cope with up to the 95°C limit expected for this project (https://noctua.at/en/nf-f12-industrialppc-3000-pwm). More examples at: https://www.coolerguys.com/collections/high-temperature-fans/https://products.sanyodenki.com/en/sanace/dc/wide-temperature-range-fan/

However, there is encouraging information from the routine use of elevated temperatures during evaluation of fan lifetimes, where accelerated testing regimes use temperatures up to 85°C - lubricants start to become unstable at 100°C and higher.https://www.electronics-cooling.com/1996/05/how-to-evaluate-fan-life/There is a good article about fan bearings, lifetime and temperature ratings at:https://www.gamersnexus.net/guides/779-computer-case-fan-bearing-differences. (Sleeve vs. ball bearings vs fluid: ball bearings = 60-75k hours at 60°C, fluid bearings = 100, 000 hours at 40-70°C - avoid cheaper sleeve bearings for higher temperature work).Also, ARX have introduced sealed ceramic bearings, and the fans can run up to 85°C, and claim 150°C for some extreme applications. (60, 000h lifetime at 60°C, retail prices start around £10).http://www.arx-group.com/ceradyna_c.html

In order to test how workable some of these ideas are, I started with a simple set of hardware: made up of low-cost components (UK retail prices) : PTC heater (£8), 40mm fans (£2.50), 40mm heatsinks (£1), MOSFET modules for computer controlled switching (£2), DS18B20 pre-calibrated digital temoperature sensors (£1) and 12V DC adapter (£10). These were integrated in various 3D printed housings, and tested using a programmable rig that I recently assembled for this purpose (https://www.hackster.io/jim-haseloff/programmable-test-rig-d7df62).

In the first instance, a PTC heater was assembled with heat sinks and thermal sensor, and a small blower fan was used to set up a recycling flow of air through a small 3D printed vessel. The design goals were broadly: (i) establish a controlled temperature range from ambient to (up to) 95 degrees C with an accuracy of around +/- 1 degree. (ii) Set up a XOD-Arduino based PID system with integrated temperature sensors. (iii) Check the efficiency of air circulation and heat transfer with different designs, and (iv) explore 3D printed designs that minimise thermal inertia, condensation in the reaction tubes due to temperature differentials - and minimise costs.

The images (below) show the relative size and orientation of the components that migt be used to create simple heating or heating/cooling circuits, and how directional fans might be used to guide recirculating or exhaust air flow.

Design of a simple housing for a PTC heater, heatsink and blower fan. I am using a 120 degree self-limiting PTC heater in this prototype (instead of 60-80 degree rated PTC heaters). This will require electrical switching and computer control to avoid overheating. The fan is mounted to push air through the fins of two heatsinks mounted directly on the resistive heater element. Heated air is directed in a recirculating loop through the chamber - exhaust from the reaction chamber is directed back to the intake of the blower fans for recirculation - hence the name AirLoop.

Note that in this design, the fan is located in the heated chamber. Although this should be OK at more moderate temperatures, could be a problem above 60-80 degrees.

In this first iteration, I tried to incorporate a few ideas - none of which are confirmed! (i) The outer and middle walls of the housing are 5mm thick, with the usual air cell filling - to minimise heat loss and direct radiation for sample tubes nearest the heater, (ii) The fan is positioned behind the heater, blowing into the heater heatsink, hoping to minimise overheating? (iii) Air flow through the heating circuit is intended to be turbulent at the main points of heat exchange, i.e. around the heatsink fins, and around the sample tube strip, and aerodynamically smoothed between these. (iv) I have introduced baffles around the sample tubes to create turbulent flows - the sample tubes themselves play a role in this. (v) The reaction chamber is designed so that heated air can run along and over the top of the sample tubes - in an attempt to minimise condensation in the tubes. This might be improved by redesign of the air flow, if necessary.

The first protoypes were printed using Ultimaker Tough PLA filament using an Ultimaker S3 printer. PLA is not ideal for use at temperatures above 70 degrees, as the material starts to lose structural integrity. We're planning to compare the performance of the PLA prototypes with 3D prints made from Nylon filament.

Hardware was added to the 3D printed incubator components - including blower fan, the heater assembly that included PTC resistive heater, heatsinks and DS18B20 temperature sensor, fixed with thermal adhesives. Aluminium tape (intended for repairing car exhaust systems) was used to lined the vessel around the heater and heatsink.

Temperature probes were wired up and inserted into the vessel via holes drilled through the 3D printed casing. Leads for the fan and heater were also led out of the case using the same method. The leads were then fixed in place, and the vessels sealed, by applying hot glue.

The completed prototype was connected to a test rig that has been described at: https://www.hackster.io/jim-haseloff/programmable-test-rig-d7df62. This Hackster project page also describes a method for making simple digital temperature probes. This Arduino-based testing rig has an integrated touchscreen and ability to rapidly build new prototypes for control and interfaces, using XOD no-code reprogramming.

Customised XOD patches included nodes to read temperature values from the DS18B20 probes, communicate with the touchscreen, and control the output of the heater and fans though electrical switching via MOSFET modules.

XOD provides nodes to implement proportional-integral-derivative (PID) routines. A PID controller aims to read a sensor, then compute the desired actuator output by calculating proportional, integral, and derivative responses and summing those three components to compute the output - for example of a heater, for precise temperature control.

Performance of the prototype was measured by setting fixed temperatures, and logging the readout of a number of digital temperature sensors over time. An example is shown below, where three DS18B20 sensors (accurate to +/- 0.5 deg C) were mounted in the prototype. The red trace corresponds to a sensor attached directly to the heater assembly. The yellow horizontal reference is set at 60 degrees). The sensor responsible for the white coloured trace is positioned adjacent to the sample holder, and the green trace corresponds to a sensor positioned behind the fan. The temperature measurements from the sample space (white) were used by the control software to regulate heater power. The blue trace corresponds to heater input, which pulses on and off to maintain constant temperature (set at 50 deg C) in the sample chamber. The temperature of the heater (red) fluctuates as the heater is powered on and off. In the middle of the trace, the lid was opened briefly to cause a temporary drop in temperature - which triggered reheating, with some temperature fluctuations before settling back to the set point.

The PID control routine in the prototype has only been crudely optimised at this stage, and performance is likely to improve with improved characterisation. Even with this preliminary version of the hardware and software, the incubators track to the set point, usually maintaining the temperature within 1 degree of the chosen setpoint, and recovering after perturbations.

With the current prototype, the heater is in almost continual use to maintain the sample at close to 60 degrees. Moves to run the incubator at higher temperatures will likely require smaller sample volume, better insulation to prevent heat loss, and/or smaller higher power heater.

Heat distribution in the prototype

An infrared camera was used to evaluate the distribution of heat within the incubator. The aim was to provide some important insights into heat exchange and air flow and heating inside the chamber.

There is a hot spot around the location of the heater assembly, and there are indications of heat transfer that result from air flow from the heater. There are relatively cooler regions around the fan, at the backend of the heated air flow. Most of these images were taken of the outside of the closed vessel - effectively looking at radiated heat from outer walls. I also looked at the distribution of heat within the inner parts of the incubator - to do this, images were taken immediately after the lid was removed. Heat loss occurs through immediate loss of hot air and radiation (below).

STL file for the MkI AirLoop base

An automated, smart, self-contained growing system that cultivates plants from seed to maturity!

Grow It Yourself | GIY

If you want a device that could measure your heart beat and plot its curve trace on an OLED display, then this will be your best guide.