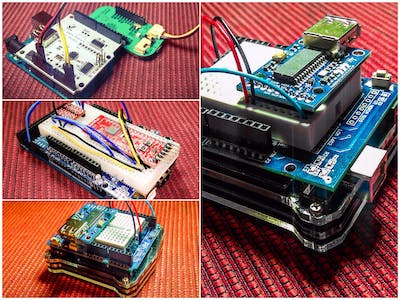 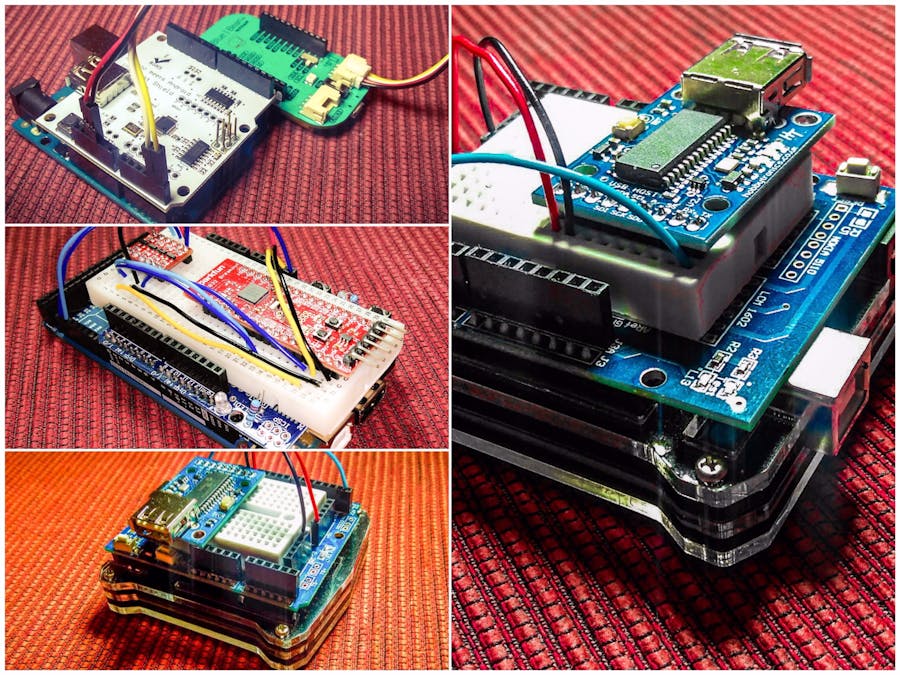 An Apple Camera Connection Kit is generally required to connect a USB MIDI instrument such as a K-Board, BopPad or Artiphon to an iOS music app such as GarageBand, DrumJam, or GeoShred. However, with the help of some Arduino components and sketches, it is easy to make an adapter that reads MIDI messages from a USB instrument and sends them to an iOS device using Bluetooth LE (BLE).

I've investigated three different approaches and provide instructions for each of them in this project.

The Arduino 101 and Hobbytronics breakout communicate using Serial I/O. The sketch running on the Arduino 101 reads MIDI messages from the USB Host breakout and then writes them to its integrated BLE service.

The adapter currently operates in one direction only, receiving messages from USB but not transmitting to USB. This is true for all adapters in this project, by the way. For this reason, the Hobbytronics breakout only needs three connections: 5V, GND, and TX. Connect its TX pin to the RX pin (D0) on the Arduino 101.

To program the adapter, upload the CurieUsbMidiBridge sketch to the Arduino 101. Now you're ready to plug-in your instrument, connect your iOS app to the adapter (scan for "CurieBLE"), and start playing.

Many iOS apps support BLE MIDI connections directly. For apps that do not, the midimittr app can act as the intermediary.

For stability reasons, this implementation of the adapter only handles Note On and Note Off messages. Support for the other channel messages such as Control Change, After Touch, and Pitch Bend may be enabled in a future version, but for now they are commented-out in the sketch.

Because the SparkFun nRF52 breakout operates at 3V3 and the Arduino Mega operates at 5V, the three logic pins are connected through a bi-directional level shifter.

NOTE: The SDA and SCL assignments must be redefined in the SparkFun variants.h file. For more details see this hookup guide discussion.

Upload sketch nRF52MidiWireMaster to the SparkFun breakout and UsbMidiWireSlave to the Arduino Mega. Then plug your instrument into the USB Host connector, connect your iOS app to the adapter (scan for "nRFMIDI"), and start playing!

Upload sketch BeanMidiWireMaster to the Bean+ and upload UsbMidiWireSlave to the Arduino Uno. Then plug your instrument into the USB Host Shield, connect your iOS app to the adapter (scan for "Bean+"), and start playing.

For performance reasons, support for Control Change and After Touch channel messages has been commented-out in the sketch, but may be enabled in a future version.

Upload to nRF52 breakout, and upload UsbMidiWireSlave.ino (see below) to the Arduino that is connected to the USB MIDI instrument.
https://github.com/joebowbeer/nRF52MidiWireMaster

Upload to Bean+ and upload UsbMidiWireSlave.ino (below) to the Arduino that is connected to the USB MIDI instrument.
https://github.com/joebowbeer/BeanMidiWireMaster

Convert a 3D-printed bagpipe chanter into a BLE MIDI instrument.

A Bluetooth-enabled glove that encodes finger movement into MIDI signals and a Python GUI that creates a virtual MIDI port for synthesizers.