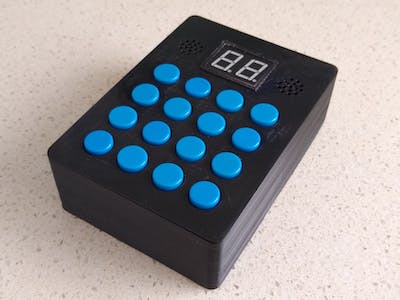 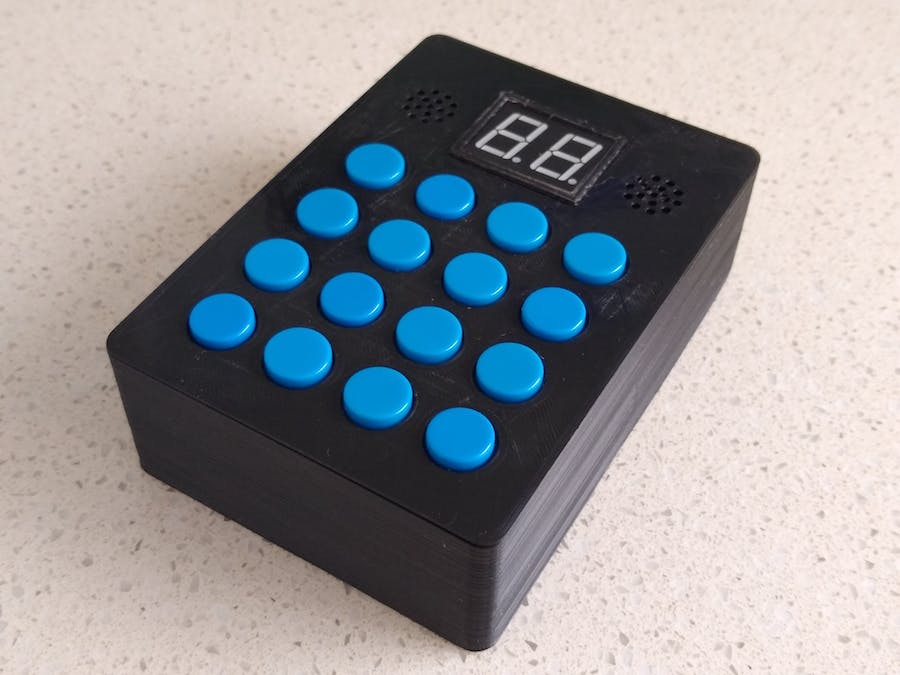 This make is a games console with 16 light up push switches, a 2 digit 7 segment display and a piezo-electric speaker. It is all driven by an Arduino Pro Mini.

The sketch included plays 3 variants of the game Tacoyaki (also known as Lights Out).

In this variant, by pressing a button, its light and those of the (non-diagonally) adjacent buttons will change (switch on if it was off, and vice versa). The goal is to switch off all the LEDs in under 25 moves.

The main difference is that the board has no edges - the left and right columns are considered to be adjacent, as are the top and bottom rows. Every light therefore has exactly 4 neighbours, and so every move changes exactly 5 lights.

This is an easy puzzle once you know the following two facts:

The following solution then suggests itself:

In this variant, pressing a button will change the state of all LEDs diagonally from it. So all lights in a NW, NE, SE, SW direction from the pressed button (including the button itself) will change state.

Press a combination of buttons on row 2 such that the lights on row 1 are switched off. This seems tricky, but is quite easy once you know how. First switch off lights A1, C1, from left to right as follows:

Print the top and bottom case files on your printer. I used 0.2 mm layer height and a 20% infill. Drill out the mounting posts with a 2.5 mm drill and make a thread with a 3 mm tap.

The PCB was made using the Toner method. I have included the Eagle files so you can get them manufactured if you wish. The Arduino Pro Mini and MAX7219 ic are mounted on the back of the board. The switches with LEDs (See instructions below on how to make these), Buzzer and 2 Digit Common Cathode 0.56" 7-Segment display are mounted on the front of the board. Use 6 mm M3 screws to hold the board in place. I suggest you insert the bezel in the front panel, place the 7 segment display in the hole, mount the board and solder the display once it has been pushed down to sit flat with the front panel.

Sketch is included. You should find it easy to add more games. There is plenty of flash program space available.

Adding the LEDs to the buttons

I used cheap 12 x 12 buttons and inserted a 1210 white LED under each of their button caps.

Solder thin wires to the LED. Try and ensure that the lead is mounted under the LED and not on the side of the LED otherwise it makes it hard to add the button cap. Also bring the leads out in opposite corners:

Once you have soldered it, test the LED by using a resistor connected to a battery or similar. Cut the positive lead shorter that the other lead (this is the anode). I found that if the leads are soldered on the bottom of the LED as shown above, you can insert the wires and position the LED on top of the switch. The button cap should just go straight on. Pull the wires taught and solder them to the PCB. 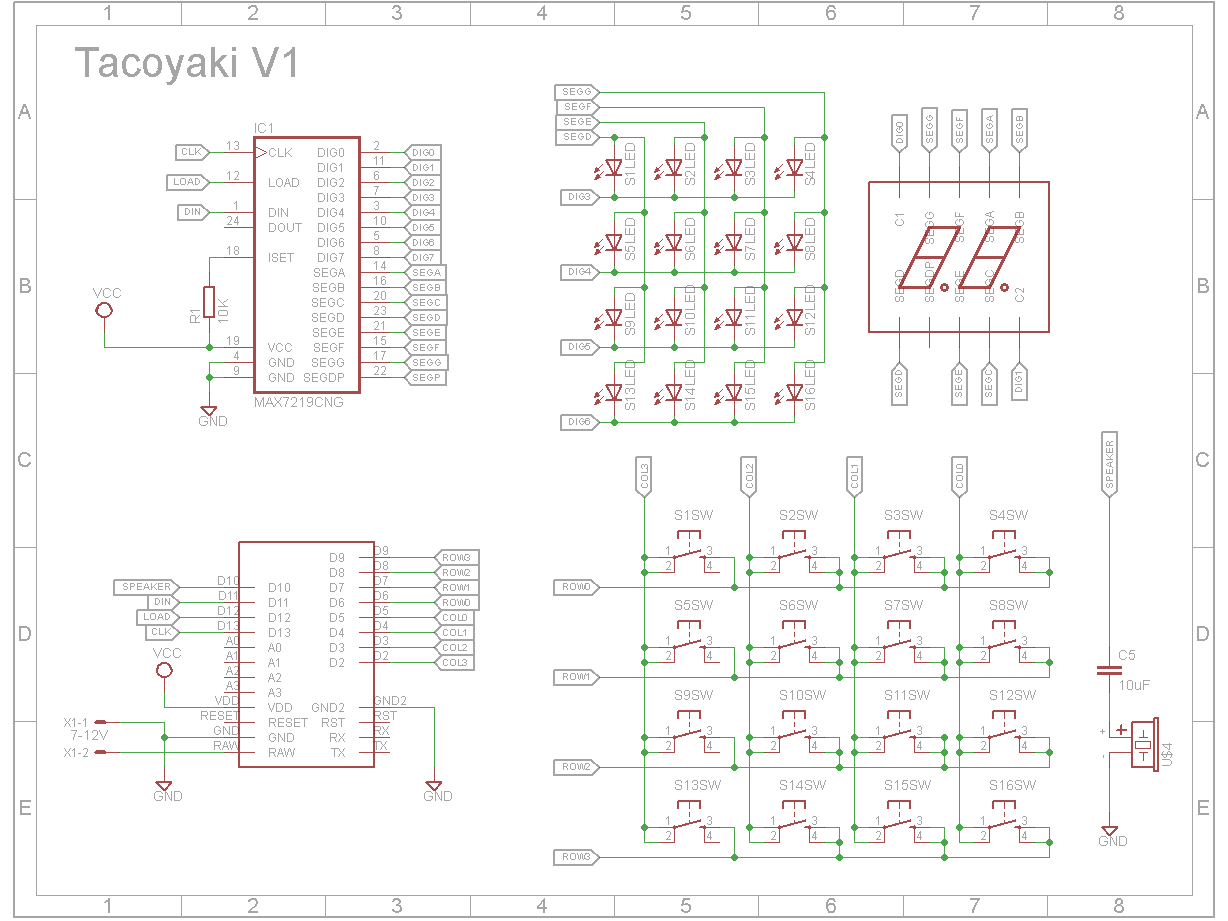 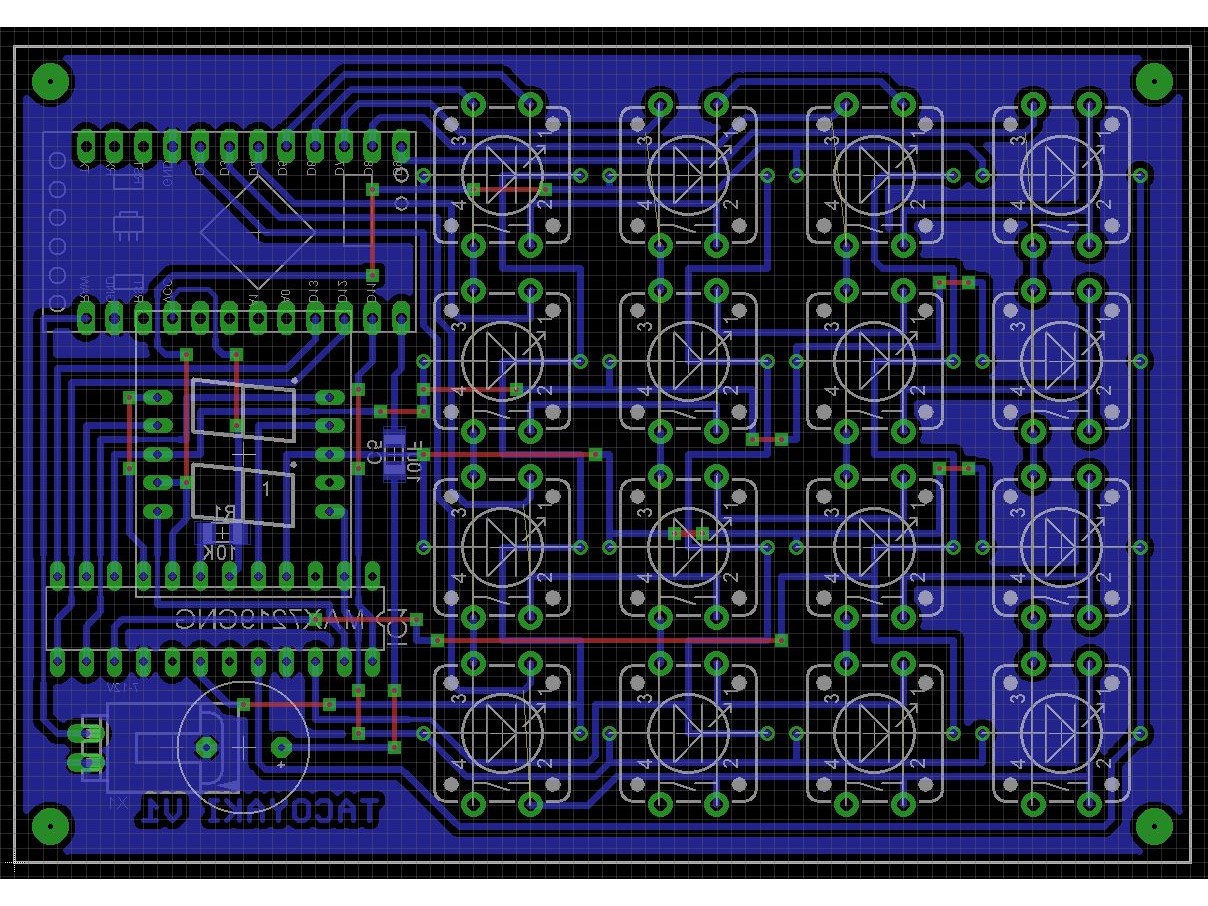 This is a fun classical snake game. And if you want you can put it in a frame to make it into a gaming console.