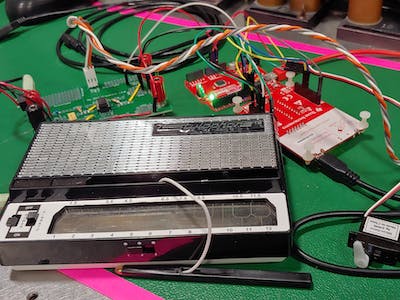 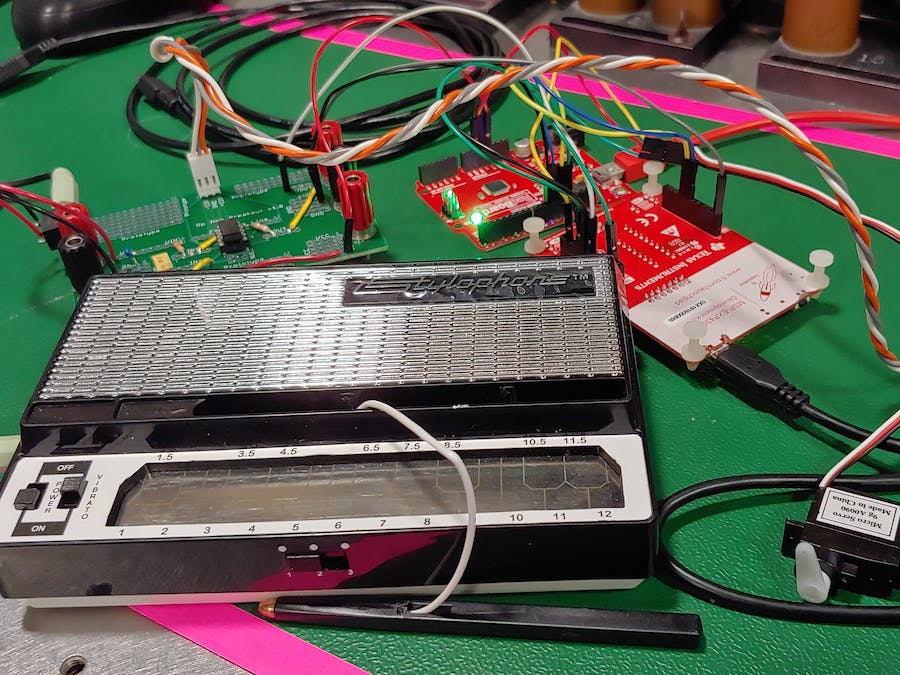 From the beginning, I knew I needed to incorporate a retro toy into my project. I had considered the Tickle Me Elmo, as those re-entered production a few years ago, but didn't think I could do the project justice under my time constraints. I first discovered the stylophone after watching a 7 second video of it on YouTube, and saw that it could be had for less than $25 USD on Amazon! It went downhill from there.

Upon receiving my very own stylophone, I took the included male to male 3.5mm audio cable (and three not-so-included AA batteries) and scoped the output signal with one hand holding the wires together and the other holding the stylus to the keypad.

Since the stylophone outputs a mono signal, I used the tip (T) as the input and the sleeve (S) as the ground (R stands for ring, by the way).

The basic stylophone has a switch for 3 sound profiles, a vibrato switch, a power switch, a volume dial, and a tuning knob. I'd recommend using profile 1 at max volume and no vibrato, and all results below use these settings. When in tune, the stylophone's lowest note is A (110Hz), and the highest note is E (329.63 Hz). The output of the stylophone has a minimum voltage from anywhere from -1.7 V to -100 mV as the stylophone turns on ("warms up" so to speak) and a peak voltage of anywhere from 1.7 V to 3.5 V. Since the TI MSP430G2553 cannot read negative voltages and the Uno can only read negative voltages if you shift the reference voltage, I decided to build a gain and shift circuit using a TI LM741 op amp.

The non-inverting input can be controlled with the 3.3 V supply from the MSP430G2553 and a 10k potentiometer. R1 and Rf in the diagram were chosen to be 9.1 kOhm and 12 kOhm to achieve the 9.1k/12k ≅ 3/4 gain. Somewhat large resistors were also chosen to limit the amount of current flowing. With this in mind, I designed and simulated the circuit in LTSpice (which you can download for free here).

An accurate simulation like this is possible since TI thankfully provides a SPICE model for many of their parts. (You can download the LM741.mod here). The simulations give the expected shift from [-2, 2] V to [0, 3.3] V, so time to build the circuit!

After soldering up the circuit, it was powered using a +12/-12 V DC power supply and the 3.3 V off the MSP430G2553. Giving an input sine wave of 4 V peak-to-peak from a function generator yielded exactly what I wanted to see.

Now giving the input from the stylophone and adjusting the potentiometer shift...

You'll notice that the high note (E 329.63 Hz) is much more compact than the low note (A 110 Hz) -- by definition. This creates problems with sampling that will be explained later.

The role of the MSP4302553 is to sample the audio signal, send it to the arduino, and based on the received information, move the servo. The ADC10 and Timer A0 is set up to sample at 8kHz.

Pin 1.4 is made (arbitrarily) the slave select and SPI is initialized

Port 2 is setup to use TA1 and TA2 pins to create a PWM signal to control the servos.

Stepping back, lets talk about SPI.

There's a lot to it, but it boils down to a communication interface specification created by Motorola in the 1980s that works as a two way street. There are four major lines that the master (MSP430G2553) and the slave (Uno) need to share: SCLK, MISO, MOSI, and SS. The SCLK (Serial Clock) is generated by the master so that communication stays in sync. MISO (Master In Slave Out) and MOSI (Master Out Slave In are the two sides of the street that tell which direction traffic is travelling (sometimes called SOMI and SIMO). The SS (Slave Select) tells when the slave should listen to the master, and when to ignore it. This allows one master to have multiple slaves without causing miscommunication. There are different ways to configure SPI, but the settings I've chosen (as specified in the code above) look like this.

This diagram can be found on page 448 of the MSP430x2xx Family User's Guide.

Arduino proves a library to make SPI communication easy but is only for making Arduino the master (go figure).

The setup only requires two lines of code, but most of the difficulty in the communication lies in getting the Uno to cooperate as the slave. The Uno and the MSP430G2553 both operate at 16Mhz, but the MSP430G2553 can communicate through SPI faster by setting the baud rate control register with a smaller divider (UCB0BRx). The Uno requires at least a 4 divider (4 Mhz) but I found occasional mis-transmissions (0x1234 becomes 0x3400) until a 32 divider (500 kHz). One of the reasons I chose to make the MSP430G2553 the master is due to the ADC taking a 10 bit sample, whereas the Uno can only take 8 bit samples. More is better here as it gives more resolution, meaning that the MSP430G2553 may be able to see a difference in 1 mV whereas the Uno may not. While SPI between these two devices sends 8 bits at a time, one can simply send 2 sets of 8 bits to get the MSP430G2553's 10 bit value across. The only issue is making sure the slower Arduino doesn't fall behind.

The Rest of the Owl

The original intent was to use FFT or pitch detection library on the Uno, but that only made things slower. Ultimately, since I knew the shape (one rising edge and one falling edge per cycle) of the signal coming from the stylophone, I took a simpler and faster approach. I simply waited for the average of the last 4 samples to be greater than a threshold when the previous average was less than the threshold. This told me I had triggered on the rising edge. Then I counted how long until this happened again and stored it. Then I'd simply take the median of the last 10 counts/periods to filter out any outliers. This happens instantaneously and allows for the servo to react in real time.

The servo is simply moved by changing the duty cycle of the PWM signal on the MSP430G2553. For example:

The code for the TI MSP430G2553 and the Arduino is attached if you'd like to take a look at it. A video of the final product is also there.

In this tutorial we will get data from a MPU6050 Gyroscope and control a Servo motor according to the movement of MPU6050.

Controlling of Servo Motor with Arduino and MPU6050

This is Unipolar Stepper library in Arduino that gives different functionalities and rotates all unipolar type stepper motors.