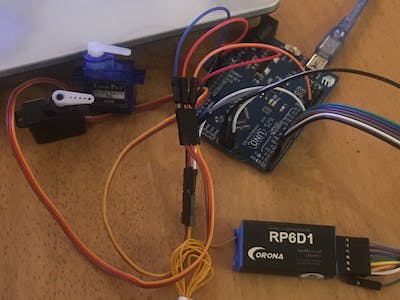 Easy to use code to measure PWM signals (<2.5Khz) plus a dedicated function to calibrate the input from an RC receiver, including fail-safe. 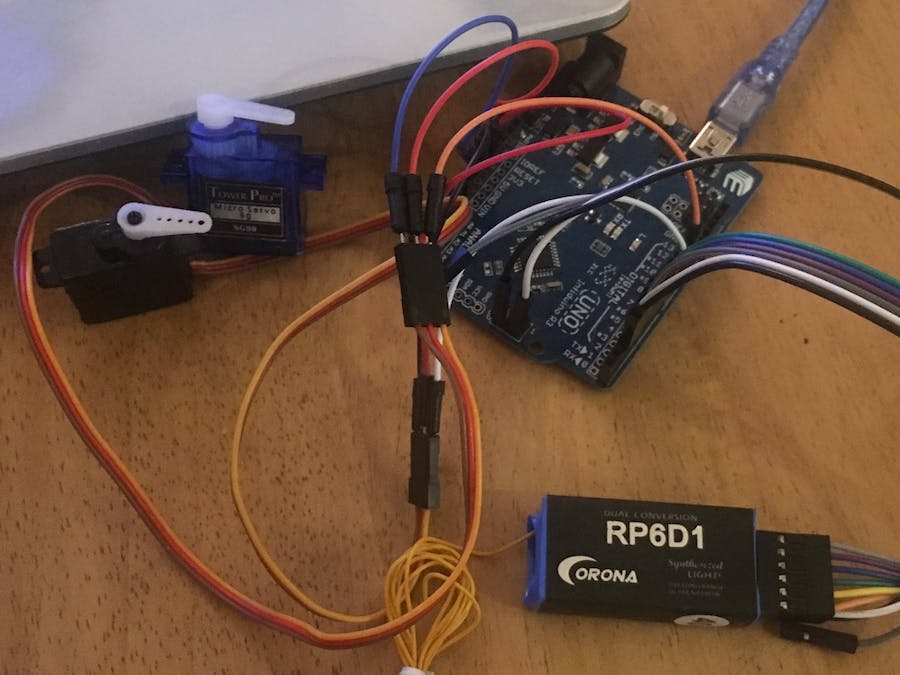 Easy to use code to measure PWM signals (<2.5Khz) plus a dedicated function to calibrate the input from an RC receiver, including fail-safe.

This project contains generic but efficient code that can be used to simply read an RC receiver (or any other PWM signal) on any Arduino input pin, and also apply a fail-safe in the case of the loss of the transmitter signal.

Below is a video showing an Arduino uno acting as a servo mixer using the code PWMread_RCfailsafe.ino available at the bottom of this page.

Helpfully the functions in PWMread_RCfailsafe.ino look after the interrupt registers for you, and can be moved easily between different projects that use different pins.

In the video example below:

How are servos and speed controllers controlled by PWM?

It is assumed in the rest of this project that you have an understanding of the PWM signals used to control servos and speed controllers. Here is a good video explaining how these pulse width modulation (PWM) signals work.

You should also have a working knowledge of:

You will only be limited by your imagination:

This code measures PWM (Pulse Width Modulation) signals using pin change interrupts. The functions used automate the set-up of the interrupts and the extraction of data from any digital or analog pin (excluding A6 and A7), on the Arduino Uno, Nano or Pro Mini. This makes the code easy to use even for beginners.

The primary aim of this project was to create a generic RC receiver with fail-safe "module" that can be quickly moved between projects. As such the example code shown in the "how to use" section can just be used as a means to an end.

Note: this code will not work with the software serial or any other library which uses pin change interrupts.

The following YouTube videomadebyJoop Brokking talks about a different projectthat uses the same method for connecting an RC receiver to arduino. During the first 8 minutes Joopclearlyexplains howto use pin change interrupts to measure PWM signals from an RC receiver.

All of this detail is looked after by PWMread_RCfailsafe.ino which can be downloaded at the bottom of this page.

Some useful information on port manipulation can also also be found here:https://tronixstuff.com/2011/10/22/tutorial-arduino-port-manipulation/

In addition to the pin change interrupt handling, a dedicated function RC_decode() has been written to convert a pulse width (1000-2000uS) into a +-100% control signal from a transmitter. A fail-safe checks for a valid transmitter signal using the signal tolerances of 10-330Hz, and 500-2500uS. If the signal is lost then RC_decode() returns a predetermine fail-safe value.

The calibration values for a specific transmitter, and fail-safe positions can be set for each channel in PWMread_RCfailsafe.ino

If following the example set-up with an Arduino Uno connect your receiver as follows: (otherwise if your using your own project jump straight to step 2)

An example sketch RC_Read_Example has been included for download at the bottom of page. You can use this as you main sketch when following the steps below.

Open or re-open the main sketch in the Arduino IDE.

Click on the PWMread_RCfailsafe tab, scroll down to the "USER DEFINED VARIABLES" title and enter the input pins in the array pwmPIN[].

Note: Any number of pins can be used, and in any order. Just be aware that the more inputs you have the more time the code will spend addressing the interrupt routine. Note A6 and A7 are analog only pins and cannot be used.

The Arduino MEGA is not currently supported, however this could be easily remedied if there was the appetite for it.

Note: the first element in pwmPIN[] is channel 1, the second element channel 2, etc... if your using all of the channels from the receiver it would be a good idea to make sure the receiver channels 1 corresponds to channel 1 in pwmPIN[]...

Upload the RC_Read_Example code, turn on your transmitter and print the raw pulse width data to serial.

The RC_avail() function should be used to check when new data has been received on all channels, and then use print_RCpwm() to send the pulse width data to serial.

Using the pulse width data printed to serial via print_RCpwm() to manually modify the values in the arrays RC_min[], RC_mid[], and RC_max[] in order to calibrate each channel into the range +-100%.

Use the RC_decode(channel) function to calibrate each channel into the range +-1.

Then print each of the calibrated channels to serial using the decimal2percentage() function followed by Serial.println("")

Adjust the fail-safe positions in the RC_failsafe[] array for each channel (in the range +-1).

Turn the transmitter on and off to check that the fail-safe operates as desired.

The RC input can now be used in your sketch.

Note: you may have to deactivate any fail-safe feature in the receiver, otherwise the arduino will notbe able to respond to the loss of transmitter signal.

The receiver pulse repetition period, and frequency can be printed to serial. Check that new data is available on the chosen channel by using the function PWM_read(channel number), before using PWM_period() and PWM_freq() to extract the data for printing. Example code is available in RC_FrameRate.ino.

It's best to use the first channel as this will be the first pulse sent in each receiver frame. PWM_read() uses the same flags as RC_decode(CH) so make sure PWM_read() is called first.

See the screen shot below:

The receiver period can be useful to know as it tells you how much time the code has before the next set of data arrives. If RC_avail() does not detect new RC data after a predetermined time i.e. 21ms then run RC_decode() in order to trigger the fail-safe and or to continue to run the program (which could be a PID controller) at a steady frequency.

This is achieved in the RC_Read_Example.ino by the following if statement.

I've included RC_ServoMixer_Example.ino to show how you could mix two receiver channels (in this case channels 2 and 3, elevator and aileron). The sketch also shows a method for setting servo direction, rate, and sub trim. The servo library is used to control the servos via pins 9 and 10.

Below is a screen shot of the servo mixing section of the code:

The mix is achieved by simply adding and subtracting the two channels together, and limiting the output to the range -1 to +1. When applying elevator and aileron mixing you create two outputs one for each servo.

Before positioning the servos you will need to convert the +-100% (+-1) signal to an equivalent pulse width in microseconds for the servo. In the RC_ServoMixer_Example.ino I use a function calc_uS() to do this. This function is placed at the bottom of the sketch and is shown in the screen shot below.

The direction, rate, and sub trim specified for each servo is used to calculate an appropriate pulse width for the servo.

The servo direction, rate and sub trim can be static or modified dynamically by the sketch in response to an input from another receiver channel, or by some other means.

Rationale for the approach taken

It is possible to read an RC receiver using the pulseIn(PIN, HIGH) function, however pulseIn() blocks the code in loop() while it waits for a pulse to start and then to finish, wasting precious processing time. If there is more than one input data could also be lost.

For speed it is best to use the pin change interrupt feature of the Arduino along with direct port manipulation to allow the code in loop() to run with the minimum of delay. This however is more involved and time consuming than simply calling pulseIn(PIN, HIGH).

Therefore I wanted to get the advantages of both worlds by writing some generic code that I can move between projects. All that is needed is to copy and paste an.ino file (containing the functions and interrupt routines) into the main sketch folder, specify the input pins, and then use the functions in the sketch.

The microsecond timing on the arduino is carried out using the micros() function. This function counts in 4uS steps. This means we have a 4 microsecond level of precision when we measure the 1000-2000uS pulses. From a practical point of view this is more than adequate.

If desired It is possible to improve this resolution to 0.5uS by using timer interrupts. see link below:

If your using PWMread_RCfailsafe.ino to read a 6 or 9 channel receiver 1.4-2.0% of the processing time is spent running the pin change interrupt routines, which I would argue is more than acceptable.

However it's always to good to understand the limitations of the code, and how it could be sped up if needed.

Below is a list of the time it takes to run each ISR depending on the number of selected input channels.

Note: the more channels used the longer each ISR takes to run. This is becausea for loopruns through each channel every time the ISR is called.

On top of the above it takes ~4uS to enter and exit an ISR. For one pulse the ISR runs twice, once at the start of a pulse (LOW to HIGH) and then again at the end (HIGH to LOW).

Note: this is the minimum pulse width than can be measured.

Assuming that the receiver repetition period is 20 milliseconds, then the interrupt will be running for 1.44% (0.000288/0.02) of the time. This is significantly better than using the pulseIn()function. pulseIn() would block the code for up to 20 milliseconds for each pin.

If using this code for any other purpose I would suggest that a the maximum practical frequency is 2.5kHz. This give 100 steps of resolution from the micros() function (+- 0.025kHz).

If using one input pin at this frequency 3% of the time is spent in the interrupt, which means that the minimum duty that can be measured is 0.03. This equates to a minimum pulse with of 12uS.

For higher frequencies rewrite the ISR to suit your application.

This .ino file contains the functions and pin change interrupt routines (ISR) used to decode an RC Receiver and apply a fail safe if the transmitter signal is lost. Copy and paste this file into the same folder as the main sketch (when you open the sketch this code will appear as a second tab in the arduino IDE). Then follow the instructions in the file.

An example sketch used to display raw data in order to calibrate your RC receiver and set your the fail safe. The PWMread_RCfailsafe.ino file should be copied into the same folder in order for the functions to be available.

Example sketch that prints the frame rate and frequency of an RC Receiver. The PWMread_RCfailsafe.ino file should be copied into the same folder in order for the functions to be available.

An servo mixing example. Two channels from a 6 channel are receiver are mixed and sent to two servos controlled using the servo library. The PWMread_RCfailsafe.ino file should be copied into the same folder in order for the functions to be available. 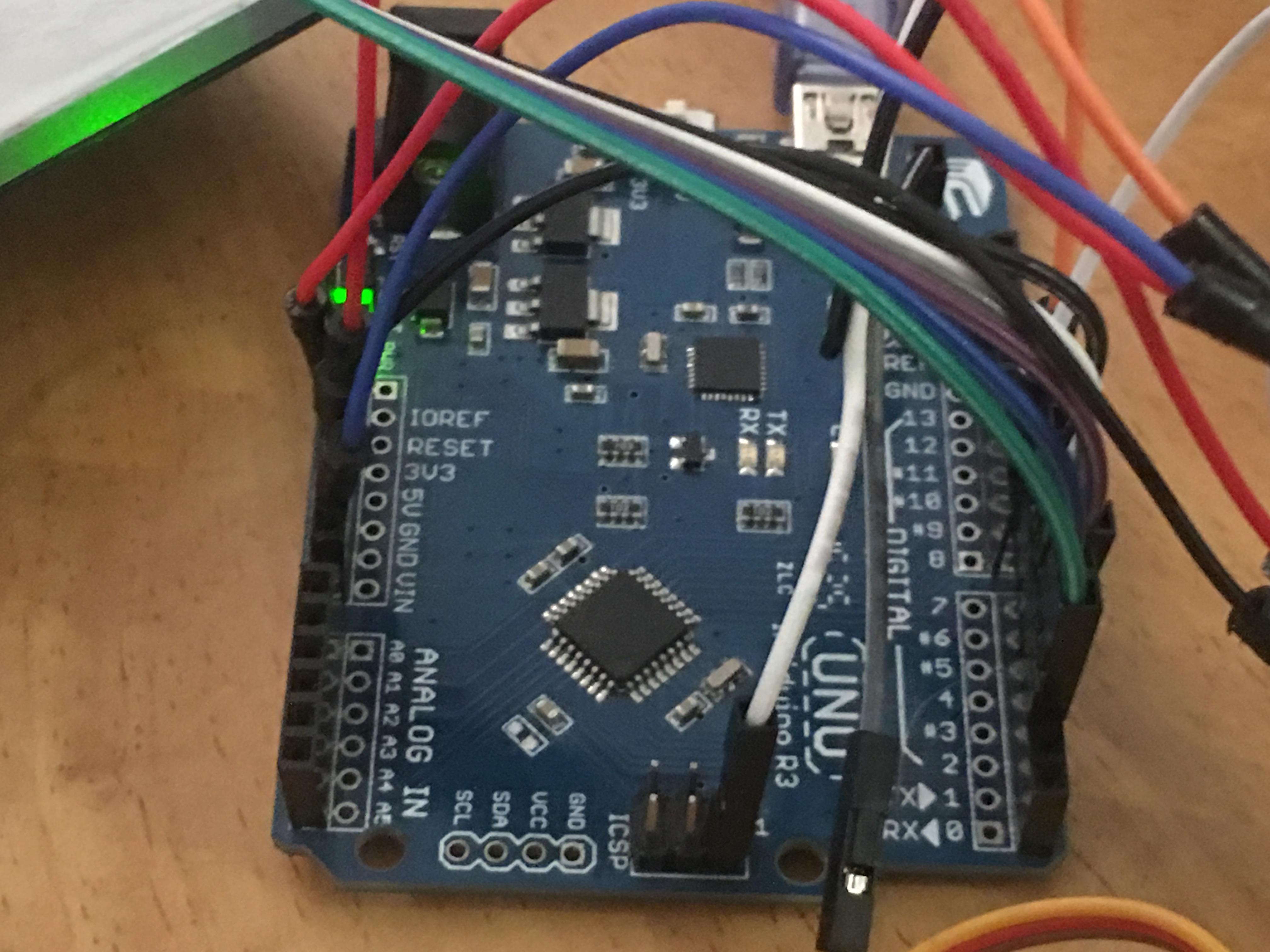 I made this RC car with an Arduino Uno, which I control via an HC-05 Bluetooth module. The project is now in its initial state.

Hacking A RC Car To Control It Using An Android Device