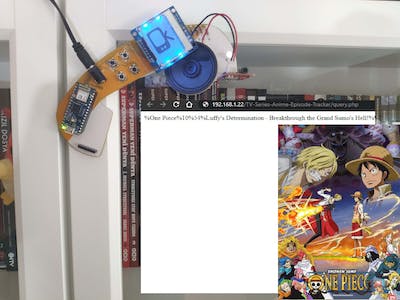 Get informed when new episodes of your favorite shows are on release with their opening songs via Nano 33 IoT and Raspberry Pi. 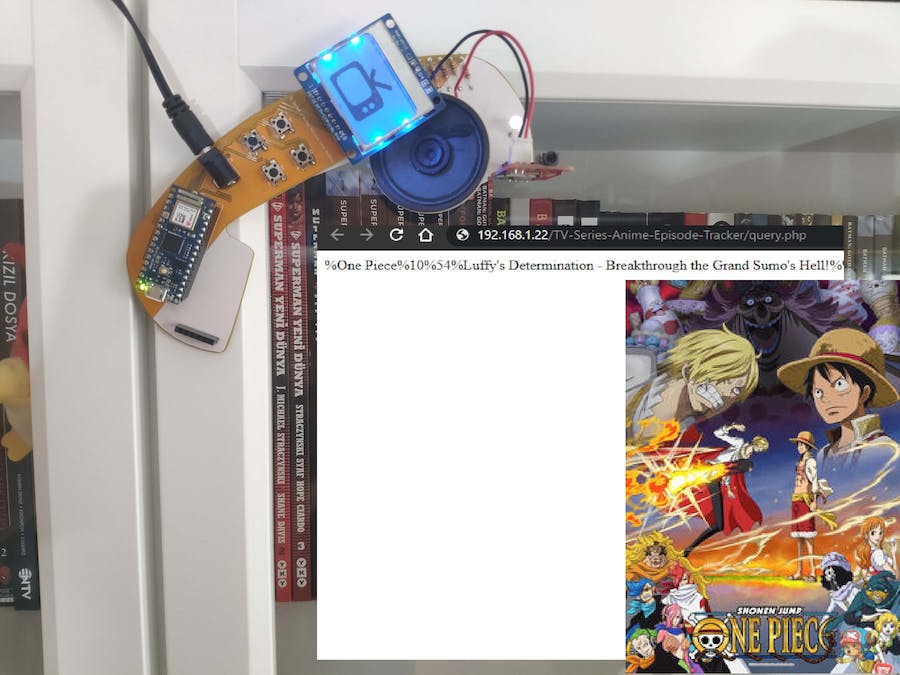 Get informed when new episodes of your favorite shows are on release with their opening songs via Nano 33 IoT and Raspberry Pi.

Although there are myriads of web and mobile applications to track release dates of favorite shows, I wanted to create a device that notifies me when a new episode of a series or an anime in my list is on release from scratch - hardware and software - with various features.

After fulfilling transferring information with the web application, if there is a new episode on release, I decided to use an Arduino Nano 33 IoT as the development board to collate data generated by the application. You can find more information below on how I sorted out the response transferred by the application by using a delimiter. And, to manage features and modes I implemented on the Nano 33 IoT, I designed a user interface (menu) with a Nokia 5110 Screen and pushbuttons.

Lastly, to get informed when a new episode of a show in my list on release with its opening song, I used a Serial MP3 Player Module (OPEN-SMART) due to its simple-to-use UART command list. Furthermore, it let me add the MP3 Player mode to play all opening songs, which turned the device into an intriguing accessory for my room :)

After completing my design on a breadboard and testing the code, I designed a PCB (TV Series / Anime Release Date Notifier) with a unique retro telephone shape to create a brand-new looking and easy-to-use device.

Huge thanks to JLCPCB for sponsoring this project.

I designed the TV Series / Anime Release Date Notifier PCB by using KiCad. I attached the Gerber file of the PCB below, so if you want, you can order this PCB from JLCPCB to replicate this project to get notified when there are new episodes of your favorite shows on release :)

Step 2: Setting up a LAMP web server with MariaDB on Raspberry Pi

If you are a novice in programming with Raspberry Pi, you can inspect well-explained instructions and tutorials on the official Raspberry Pi website.

To go to the official Raspberry Pi setting up tutorial, click here.

GRANT ALL PRIVILEGES ON tvseries.* TO 'root'@'localhost' IDENTIFIED BY 'bot';

Step 3: Getting information from TVMAZE REST API on your favorite series/anime

TVMAZE provides a free and easy-to-use REST API, which allows users to search shows by name, date, episode number, etc. You can inspect the available endpoints and queries:

I used the Episode by Date option to retrieve all episodes from a given show that have aired on a specific date.

To be able to obtain information by release dates, you need to search your favorite shows on TVMAZE and use the TV ID indicated in their links.

If there is an episode aired on the given date, the API returns an array of full episode info.

Otherwise, the API returns an HTTP 404.

Below, you can inspect my favorite series/anime list I created to track whether there is a new episode of one of them that is on release with my project.

I added The Late Late Show to test my code since it is a daily show.

I developed the TV Series / Anime Release Date Tracker in PHP and explained the source code of the application in the Code Explanation section below for those who are interested.

However, if you are not fond of web development with PHP, you can download the application in Downloads - named TV-Series-Anime-Episode-Tracker.zip - and upload it to Raspberry Pi without diving in PHP coding.

By the following steps, install the TV Series / Anime Release Date Tracker on the localhost:

2) If the database table (series) is created successfully in the database, the application informs the user - Database Table Found!

3) After creating the database table (series), to insert variables required for TVMAZE REST API for each show in your list, take the following steps:

For subscribers to my website (TheAmplituhedron), I developed a free version of the TV Series / Anime Release Date Tracker for those who do not have a Raspberry Pi nor want to use one as a host for this project.

It provides a user-friendly interface for managing the database. If you want to use this interface with your project instead of using the terminal on Raspberry Pi to insert data, please contact me.

Go to the application:

If you are a novice in programming with Arduino Nano 33 IoT: do not worry, it is simple to use with Arduino IDE. Just download the required drivers - Arduino SAMD Core - as well-explained here.

To be able to connect to the WiFi via Arduino Nano 33 IoT, download the WiFiNINA library from here.

To print text and draw graphics on the Nokia 5110 Screen, download the LCD5110_Basic library from here.

I used the second serial port (Serial1) on the Arduino Nano 33 IoT to communicate with the Serial MP3 Player.

Then, Arduino Nano 33 IoT is ready to execute the project code :)

I created a playlist consisting of opening songs of my favorite series/anime list in this project:

If you want, you can download my playlist in a zipped folder - opening_songs.zip.

"The module is a kind of simple MP3 player device which is based on a high-quality MP3 audio chip. It can support 8k Hz ~ 48k Hz sampling frequency MP3 and WAV file formats. There is a TF card socket on board, so you can plug the micro SD card that stores audio files. MCU can control the MP3 playback state by sending commands to the module via UART port, such as switch songs, change the volume and play mode, and so on. You can also debug the module via USB to UART module. It is compatible with Arduino / AVR / ARM / PIC."

In other words, to be able to execute commands accurately, save your songs in a folder named as '01' and add consecutive numbers to song names - 001One Piece-Opening.mp3, 002My Hero Academia-Opening.mp3, etc.

After finishing and uploading the code to the Arduino Nano 33 IoT, I attached all required components to the board via headers.

I also provided a connection slot for a DS3231 RTC Module for those who want to change the Arduino Nano 33 IoT with the Arduino Nano. But, you need to enter release dates manually for each show to the Arduino Nano without being able to obtain data from the web application to create a countdown timer with the RTC.

2) After establishing a successful connection, the device informs the user with this message - Connected to WiFi!!!

3) Then, the device prints the interface (menu) presenting available modes - A.Init Tracker, B.MP3 Player, and C.Sleep. To switch among modes, use the Right and Left buttons. Subsequently, press the OK button to select a mode.

A.2) If the application (TV Series / Anime Release Date Tracker) sends a data string that of a released episode of a registered series/anime in the database, then the device:

For instance, I assigned these colors below for each show in my list:

Unless the Exit button is pressed, the device keeps displaying the episode information and showing the assigned color.

The device notifies the user for once for each released episode to prevent any recurrence.

A.3) After the Exit button is pressed, the device draws the television icon while waiting for the next request to the application.

A.4) If there is no released episode of a registered series/anime in the database, the device displays this message - No Released Episode Detected :( - and then; draws the television icon until the next request to the application.

A.5) The device returns to the interface (menu) if the Exit button is pressed while displaying the television icon.

I implemented this feature as a subsidiary and fun one to turn this device into an intriguing accessory for my room.

B.1) After selecting the B.MP3 Player mode, the device draws the music note icon and lets the user play all opening songs by using the control buttons:

B.2) The device returns to the interface (menu) if the Exit button is pressed.

C.1) After selecting the C.Sleep mode, the device enables the sleep mode in 10 seconds and prints the remaining seconds on the screen.

C.2) While maintaining the sleep mode, the device applies a given color pattern to the RGB as a nightlight.

C.3) The device returns to the interface (menu) if the Exit button is pressed.

After completing all steps above, I decided to fasten the device to my bookcase by using a hot glue gun. It works stupendously :) 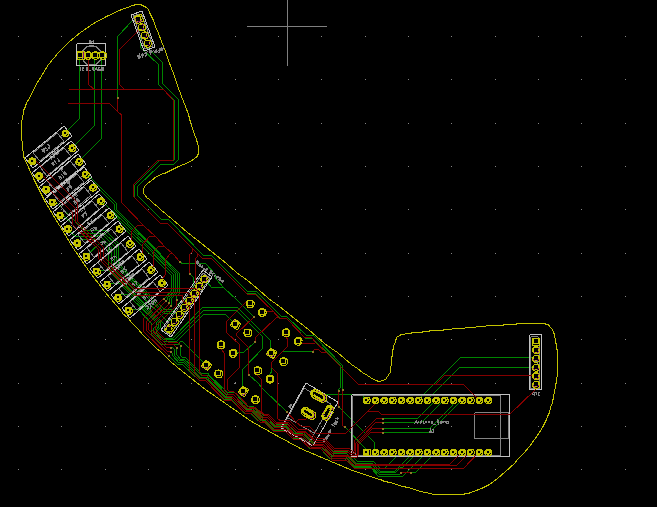 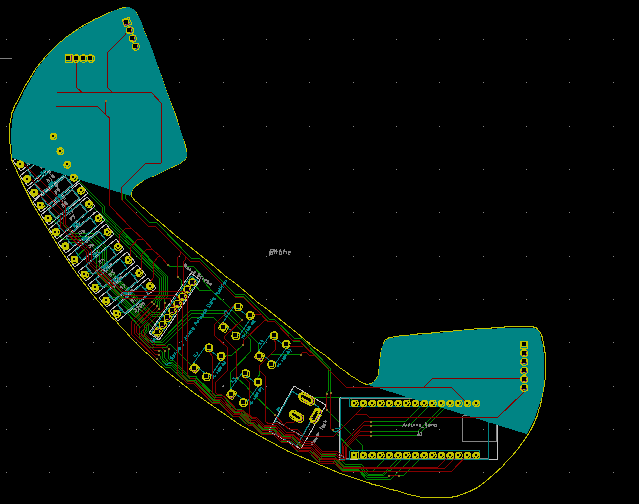 Feed the poultry in quotidian routine to condition them - sensory preconditioning - to improve egg production and hatching process.

Display comics release lists of this, next, and previous weeks via Nano 33 IoT and this amazing 🕷 PCB playing Spider-Man theme song :)

Via Nano 33 IoT, display the follower count of a given Twitter account and its current follower status - STABLE, DEC, or INC.