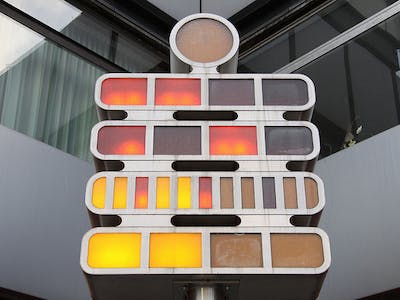 Another type of clock, which needs a bit of thinking, before you can read it... 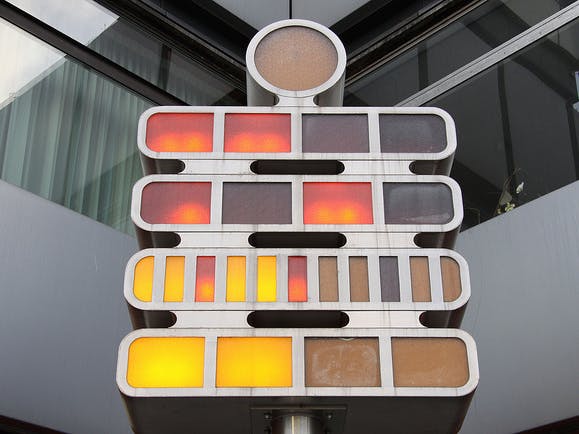 Another type of clock, which needs a bit of thinking, before you can read it...

This is a copy/paste from a tutorial I wrote on the Instructables website. I still need to figure out how I get from one site to another. So maybe this isn't as slick as it ought to be... But, get started with a-not-so-daily-clock.

The Berlin Clock, BerlinUhr or Mengenlehreuhr, was probably the very first digital clock.

Lots of info you can find here: https://en.wikipedia.org/wiki/Mengenlehreuhr

How is it made, how do you tell the time?

In short, there are four rows of lights. The upper row gives the hours x 5, the next the "single hours" from 1 to 4. The third row gives us the "minutes x5", the bottom row the minutes.

The biggest light on top blinks every second.

I thought this clock might be some fun to make in Arduino.

What do we need for this project?

First of all, (of course), our Arduino.

I use one of my Uno's that are lying everywhere near my computer.

A breadboard, a print-board with only holes and "solder-islands". I just used a part of the so-called "Euro card-format".

The MAX is an 8-digit LED display driver. Many of us know it as it is used in LED matrices as well.

For the easy of it, I also used the "LedControl" Arduino library. If you still don't have it, you can download it from here:

You can find a very nice data sheet for that MAX 7219 at this place:

I won't go in to that data sheet any further, but it's worth using it, it's a kind of "fun" IC.

A jump to the Arduino.

On that scheme you see a very simple construction: I use SDA and SCL to use the clock (A 1307 breakout), and four more outputs: DataIn, Clock and Chipselect that go to the MAX 7219, and OUT 13 that we use for our blinking "seconds"LED.

The most things do happen in the Arduino: it reads the clock, converts it to the different kinds of output, and then sends the data to the 7219.

When you read the code, you'll see I just use my own language, Dutch, for that. For example: the int "vijfuren" I use is the variable that counts "Five-hours", same for the "vijfminuten" and "vijfminuten1": those give the "Five-minutes" output.

In the sketch I also use the year, month, day of month and weekday, in this particularly sketch I don't need them, but maybe later, I could add a calendar to it.

In the Fritzing(c) layout, the IC is not wired: I did that for the ease of it, as it has lots of outputs.

Lets sum them up:

pin 4 and 9 are connected to the GND,

18, ISet, is connected to VCC with a resistor: this one limits the current that goes to the outputs. First, I tried with a 20K resistor, but after 10minutes or so, everything went dark... Now, with a 68K resistor, the clock is still running (after more than 24hours). But there is a difference between the brightness of the red and yellows, I think it's due to the fact that the red ones are in fact RGB Leds. I have to sort that out...

pin 1 is DataIn, this one comes from the Arduino, pin 12

Taking a look at the outputs:

The 7219 has the possibility to power 8 7seg displays.

The other outputs: Segments A to G an DP (of a normal 7Seg display).

That made me change my coding, as I already soldered the LED's...

On this schematic, you see how the LED's are connected together. I only drew the first three, the others go the same way.

The seconds LED is connected straight to Pin 13.

Ok, the bottom row is not that clear, it's on a breadboard. I hope you believe me that it really works. (it does!).

Hope you enjoy this! 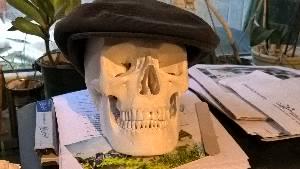