As part of my participation in the Lockheed Martin Aerospace Engineering Post, a high school outreach program run by the company, my team and I were tasked with designing and constructing a hovercraft able to lift a 1/2 lb weight and autonomously follow a course. Our budget was $200 which proved sufficient for our design with a healthy cushion. Using this design, our team was able to place 1st during final project exhibitions.

Thrust and power management is handled by drone parts in a semi standard drone configuration a Power Distribution Board (PDB) supplies power to the 4 motors that maneuver the craft. Each Motor is connected to an Electronic Speed Controller(ESC) which allows for individual control of each motor's speed. These ESCs are wired into an Arduino Uno with a Protoboard shield, which allows each motor to be controlled by codeThe line following is handled by an array of QTR reflectance sensors at the front of the craft. Through the QTR arduino library, these are used to estimate where along the array the line is centered. The QTR sensors need to be calibrated every time the craft powers up, this allows for operation in new environments.

The Arduino takes in QTR Sensor data and estimates the position of the line. It then signals the two rear fans to correct the crafts course. The craft is pushed forward if the line is detected near the center of the craft.

The majority of the design time was spent on testing and iterating our code to provide for successful hovering. The end goal was to provide sufficient upward thrust to hover without losing control; to balance under correction and over correction when it came to line following; and to allow provide enough forward thrust to move through the course without speeding out of control. Through over 50 test runs, the Hovercraft settings were dialed in to allow for successful navigation of the course.

We had two opportunities to demonstrate the capabilities of our hovercraft, spaced about 2 weeks apart. Our first demonstration day was semisuccessful: we were unable to complete the course because the craft kept spinning out of control, but we did demonstrate that our sensor array worked correctly.

Two weeks and lots of tests later, we were able to almost complete the course with a few human interventions. We still finished in fist place because we made it the furthest around the course.

With more testing, this design has the possibility to become much more accurate and powerful. Unfortunately this final project lined up with Finals, SAT and AP testing, which severely limited our testing time. If given more time, we would continue to revise the design and make it our goal to complete the entire course in a timely manner without any human interaction. This was a great project that challenged me as a programmer and helped me develop skills related to engineering in a group setting, something I am very unfamiliar with.

Download
A rough draft of the circuit design, wire the ESCs to the Power Distributor, and conntect that to the battery through a high voltage switch. 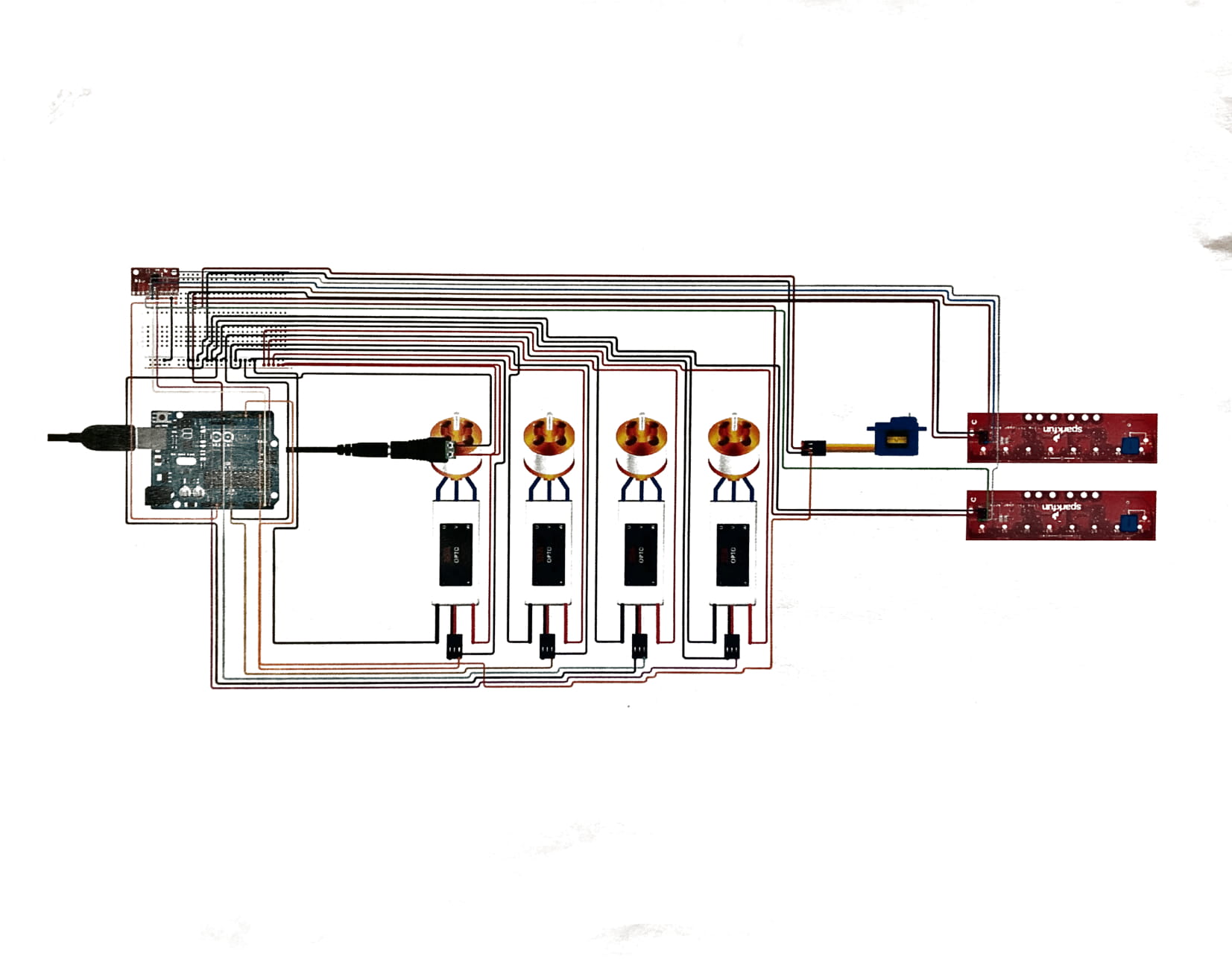