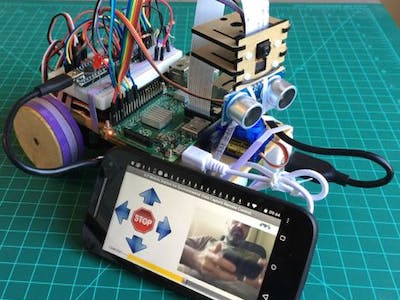 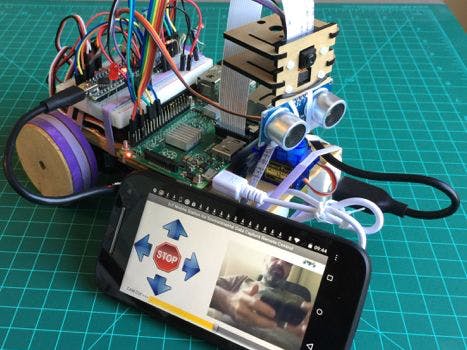 This project is entitled for the development of a fully functional mobile prototype "Rover Station”, responsible for environmental data capture as Temperature, Humidity and Luminosity. The idea is in the future add other functions/parts to this prototype to really get a Mars Rover emulator. This prototype is for education purposes only and was part of my Capstone Project at Coursera - University of California, Irvine "An Introduction to Programming the Internet of Things (IOT)" course.

Based on the project requirements, 2 options were considered for this project. A single processor responsible for all tasks, that in this case was a Raspberry Pi and a dual processor, having the requirements "split" between them (Arduino and RPi):

In terms of costing, using 2 processors is in fact less expensive than the single processor option. This is because the Arduino is a very cheap item and less expensive that the Rpi Hat option necessary to run de Servers with RPi. Another difference is the BT module. For Arduino a very cheap HC-06 BT 3.0 slave module can be used, costing half of the price of the BT dongle to be added to RPi. So, the dual processor was the chosen option.

In the project folder edit the app.py file, comment out this line:

Save the file app.py . Run ifconfig to find out the local IP address of your Raspberry Pi “yourLocalIPaddress ”. Start the Flask server by running this command:

A message will be printed at monitor:

Open up a web browser and go this address:

First, get the Library from Github:

Test the sensor running the file AdafruitDHT.py at monitor. Enter as parameters: 11 (Sensor DHT11) and 4 (GPIO where the sensor is connected):

The result should be the temperature and humidity read by the sensor.

For the basic settings of the DH-11 sensor with the RPi, and sending data to internet, a great help was get from this tutorial:

From what was learned, the important is:

The general idea for this step of the project was learned from:

A LDR and a Capacitor was connected to GPIO24. If there is light, the GPIO24 will return HIGH and w/o light “LOW”. The Python Code used in this test:

The next step was to get "light intensity data ". To add the LDR to RPi the best is to convert the analog signal from the sensor to a digital value using an external ADC (Analog to Digital Converter). The RPi does not have an internal ADC as the Arduino. If you do not have an ADC, a good approximation is to use a capacitor charging/discharging technic. The "Raspberry Pi Cookbook" gives the solution (note that Instead the Potentiometer, a LDR could be used):

The best is to use the Arduino to capture this kind of info and send it to RPi. The result will be more accurate.

Step 8: Sending all data to the web

The previous Python Code was updated, including the new sensors:

One of the characteristics of IoT is to interact with users automatically. You can program the RPi as a WebServer to send Tweets directly or use the feature that the Website ThingSpeak has (but of course in the last case, only messages "triggered" by a condition based on the data captured and uploaded will be send). Python code:

Another simple solution as explained before, is to send a Twitter directly from the WebSite. In this case the ”React” feature of ThingSpeak.com can be used.

Step 10: Connecting the RPi and the Arduino using Serial Communication

The Arduino used was the NANO that is powerful as the UNO but on a "small form factor. For tests purposes, A potentiometer was connected to Arduino analog port A0 and the value transmitted via Serial to the RPi. In the test, RPi will be reading a Keyboard (connect to it or thru VNC) and depending on the command, the Arduino LED will be toggle "ON/OFF".

Bellow the Arduino and Python code used on the tests:

At this point, the Rover will start to be assembled. I decided to disassemble all sensors and start from zero the "Arduino Phase ". Once the Rover was properly working, the RPI and sensors were reassembled.

For motors, 2 continuous servos (SM-S4303R) were used. Those servos will run with a speed depending of the pulse width received on its data input.

The first thing that must be done, it is send a 1500ms pulse to verify if the motors are "stopped". If not, the servos must be adjusted to full stop (look for the yellow bolt, bellow the servo). Of course if your servo does not have this adjustment, try change the "1500ms" value until you get the full stop.

The code below, can be used for a complete Rover motor test (forward, Backward, Full stop, turn Left, turn right). If necessary you must adjust the delays for the required turn angle depending of your motors (also, sometimes left and right pulse values should be a little bit different to compensate any lack of balance of the motors.

First of all, note that the Robot or "Rover" is a prototype for educational purposes and was built with elastic band, wood and clips jointing the original parts. It is very simple, but works fine for what it is intended.

For the Remote Control, an Android device was the chosen one, because it is very easy to develop an app using the MIT AppInverntor2. For this project, I developed the app shown in the photo.

At the Arduino, a HC-06 bluetooth module was used. You need more information about how to use this module, please see my tutorial:

The complete Arduino code (the previous one + BT) is available at file below (do not forget that the 3 files, must be inside an unique folder:

The app is very simple. It has:

Bellow the .aia file if you are familiar with MIT AppInverntor2 and the .apk if you want only install and run the app in your phone.

For obstacle avoidance, an ultrasonic sensor (HC-SR04) will be used. The sensor will be mounted over a 180o servo motor, in order to increase the area to be searched. Note that the servo will be also used as a base for the Pi-Camera. So, the user can have a a bigger view of the area to be researched. A slider at Android app will control the camera angle.

The sensor works sending a sound pulse at trigger pin (2us LOW; 10us HIGH) and register how many microseconds the reflection of the pulse takes to return to echo pin (remember that sound travels at 340m/s). The function ”int distMeter()” is used for this calculation.

In case an obstacle is found at 20cm (at front), the rover will stop, light ON the LED and run back a few centimeters. The video shows the tests with the Rover. The complete Arduino code (the previous one + obstacle avoidance and search servo control) is available at the files:

At this stage al individual parts were tested and it functional. Now both, the Rpi and Arduino must be integrated. Note that I only included the LDR that measure the light (not the On-Off).

Once you can see the camera video use CTRL-C to liberate the monitor to enter the main Python code.(same as the one used at step 11). Run the Arduino sketch. Move the rover with the Android app and check the video and the sensor values. Check if the rover stop on an obstacle. Monitor the Website and see the environment data continuously been displayed. The video shows the complete prototype being controlled by the Android app, capturing sensor data and showing at the Internet. Below the final Arduino codes:

I am very happy that this tutorial called the attention of MagPI, the Rapsberry Pi official magazine, that published in its last May issue an interview with me about the project (my name was quoted wrong: "Marcio" instead of "Marcelo").

The full magazine can be download in PDF form the link: MagPi edition 45

That is it! If everything works properly, your "Mars Rover emulator" is ready!

In the future would be interesting to include some features at this project:

So, we can really have a more realistic "Mars Rover emulation". Thanks and I hope that this project can help others to learn about Raspberry, IoT, Arduino, Robots, etc. The complete updated code can be find at GITHUB. For more tutorials and tips, please visit my Blog.

"Rex, the Robot" will try finding how to scape from a "labyrinth" on the shortest and fastest way.

Mars Rover that uses Arduino 101 for brains, BLE for communication, and the Blynk app for remote control.