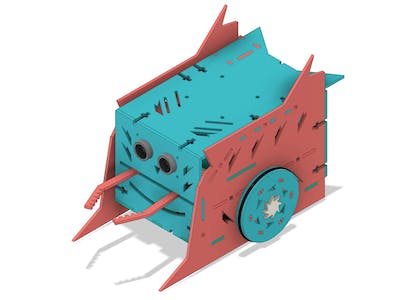 You'll learn how to create your own combat robot with gripper and Arduino.

Project tutorial by Moreira and JLCPCB 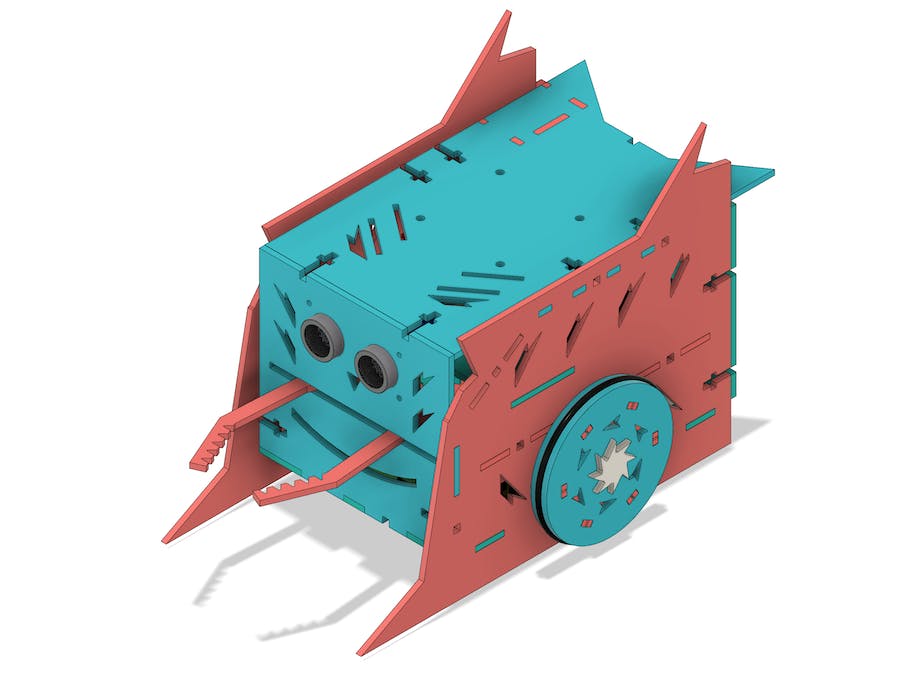 You'll learn how to create your own combat robot with gripper and Arduino.

This project was developed in partnership with Robô Lúdico Schooland JLCPCB Factory that offers 5 free PCBs of Arduino Compatible Board.

Have you ever imagined assembling a competition robot and putting it on a battlefield with several other robots? I am absolutely sure that you have seen some robot battle competition. They are placed in a closed environment and are controlled by a team of people.

And some competitions are allowed to implement advanced features for robots, such as, for example, the implementation of claws. This category of accessory can influence the stop in a dispute, as it allows the robot to interact more aggressively with its opponent.

The time has come for you to learn how it works and assemble your first robot for competitions.

With great joy, your robot will destroy enemies, or with great sadness, you will see your robot being destroyed.

Let's learn how to assemble a mini combat robot?

To facilitate development we use the Arduino platform to control the robot. Figure 1 illustrates the Claw Fighting Robot prototype.

This robot is formed by the following resources:

With all these resources we will be able to create several features for the robot. Keep reading and see what you can do.

But before we start showing you how it works and resources, see what you will learn in this project:

One of the characteristics of this robot is its size. It was built to be very compact and agile. The figure below shows the internal region of the robot.

In the internal structure, it is possible to observe the ultrasonic sensor, the DC motors, the support for rechargeable batteries, the drive module, and the battery charger module.

At some points, it is also possible to observe some tears, where the spare parts of the sides and surfaces of the prototype will be fitted.

Fittings designed for M3 nuts and bolts were designed to fix the structure.

The M3 screw has ideal size for this type of project, as a size above or below this, could unnecessarily increase the weight of the prototype, or make it more fragile, respectively. Figure 3 illustrates the internal and upper surfaces of the robot.

The robot in this project has 2 wheels with 1 motor each, and the driver module is responsible for controlling these motors.

This driver can control from the speed of the robot's wheels through the Arduino's PWM pins, up to the direction of rotation, being able to control up to two DC motors, or a stepper motor.

The driver was installed on the upper internal surface, just above the Arduino UNO, as shown in Figure 4.

The wheel of this robot has three parts: the internal, the intermediate and the external. The internal and external have the same structure.

The three parts that make up the wheel are connected by 6 pin-like structures, however, with a rectangular shape, in order to leave the three parts fixed to each other.

In addition to this structure used to fix the three parts of the wheel, a part was also modeled to be in the center of the external wheel, in order to hide the hole in the motor shaft.

The following figure illustrates the composition of the Claw Fighting Robot wheel, along with an oring ring.

In order for the system to become autonomous, a support for two rechargeable batteries was placed in the front region of the robot.

For this support of the batteries, a structure was modeled to keep it in the chosen region.

The structure consists of three parts: two parts at the ends of the support and one in the upper region of the battery support.

The upper part is responsible for receiving the screw nuts, and the screw will be placed one at each end, to lock the support.

The end pieces, in addition to also receiving the screws, will have an outlet for the connections.

The following figure illustrates the structure of the support developed.

This battery will be used to power the Arduino UNO, which is responsible for controlling the robot's electronic system.

It was installed in one place to make the robot compact and facilitate its exchange.

In addition, the robot has a TP4056 Lithium battery charger module. This module is an electronic circuit developed to recharge the batteries in the robot's own structure.

This prevents the user from removing the battery after discharging.

With the help of this module, it is possible to develop a more autonomous robot in relation to its energy recharging, making it, for a period, independent in this point.

In this way, this module was placed in the upper right rear region of the robot.

In this way, the battery charging module was coupled to a support modeled to fix it in the mechanical structure of the mobile robot.

The structure is basically formed by 4 parts located on the upper left rear end of the robot, confirms the following figure.

To fix the ultrasonic sensor, a structure was modeled to fix it in front of the robot, where it will be connected by two M3 screws, with their respective nuts.

The following figure illustrates the position of the ultrasonic sensor in the combat robot.

The Arduino is basically responsible for two purposes: to perform the signal processing of the ultrasonic sensor and to make the necessary settings to control the motors through the driver.

The Arduino was positioned in the upper internal region of the robot, in order to facilitate the developed programming and possible changes.

The control board is shown below and has the Arduino UNO format. All sensors and drive drivers will be connected in their structure.

The control board is responsible for receiving control commands via Bluetooth or sensors. Based on the information received, it will activate the drivers so that the motors can move the robot in a certain direction.

Did you win the files on that board? Follow this process and get 5 free units. It is easy to assemble!

Now, see all the sensors that make up the robot's structure.

Next to the Arduino connection, a seesaw switch was also placed to turn the robot on and off.

For the USB connection inputs and for the connection to the battery charging module, two embossed structures were modeled, in order to highlight the region.

The following figure illustrates the position of the Arduino connection, the seesaw switch, and the loader module in the combat robot.

The following figure illustrates the entire structure of the combat robot in exploded perspective of the main parts in a rendered image.

From this robot, we can develop several categories of projects and robotic competitions.

The main parts of the structure were checked and analyzed in order to better understand the importance of correct assembly, observing the function (according to the structure where it was fitted) of each component.

Therefore, from the development of the Combat Robot project, it was possible to analyze its mechanical structure and optimize the available spaces.

The robot's structure was modeled with M3 fittings and screws for its fixation and thus, better mechanical stability was created.

All its development was done with the purpose of making it as didactic as possible for its subsequent assembly with the electronic part.

The control board is shown below and has the Arduino UNO format. All sensors and drive drivers will be connected in their structure.

The control board is responsible for receiving control commands via Bluetooth or sensors. Based on the information received, it will activate the drivers so that the motors can move the robot in a certain direction.

Did you win the files on that board? Follow this process and get 5 free units. It is easy to assemble!

You will learn how to build and control your first robot with the Arduino.

Do you want to create your own robot? Then this is your best guide. This is a smart robot controlled by an Android app so easy to build.