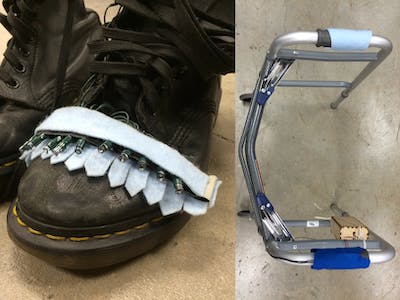 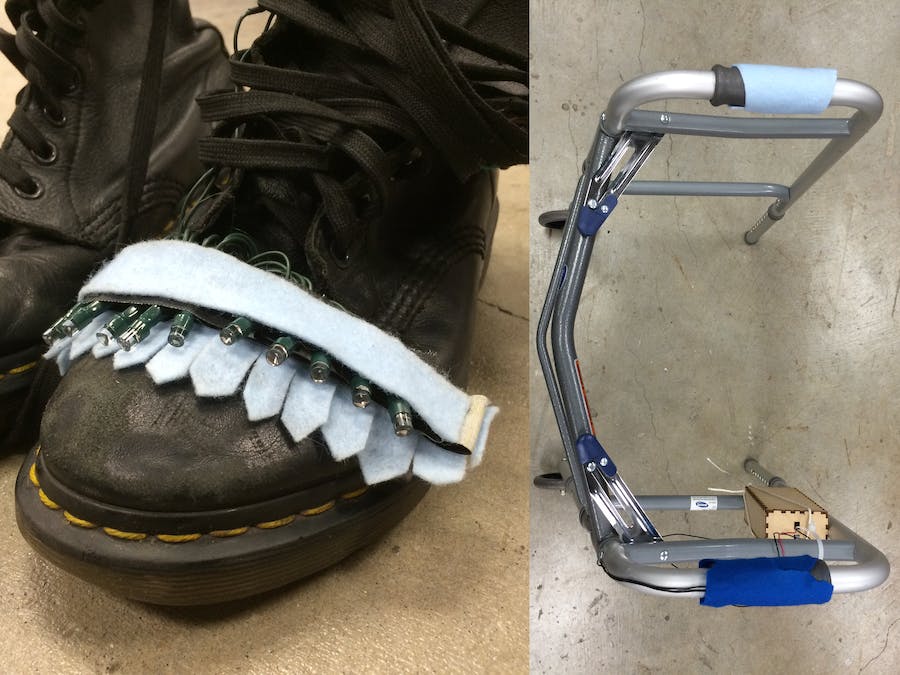 Old Sole interrupts normal youthful days to force young people to interact with their environment in a different way. If the young shoe-wearer takes significantly more steps than the elderly individual with the walker, the shoes light up and vibrate uncomfortably, reminding the young person that somebody on the other end of the old sole is not able to keep up.

This is not meant to be a user-centered product, or particularly useful in any way. Rather, it is meant to make us aware of age, aging and dying as we walk. One day, the wearer of the shoe will be with the walker and will slow down the shoe walker, bringing the Old Sole full circle.

We spent a lot of time brainstorming, trying to build and jump off ideas. Our original idea was to tackle a targeted user group that usually does not benefit from technology. We thought about building attachments for walking sticks for the blind, wheelchairs, and walkers.

Eventually, we settled on the idea of the walker. Original ideas around the walker were dark -- we were in the design noir mindset. We considered building motors that inhibited walker movement based on bad signs from the world -- falling stock prices, bad weather, etc. Then, we went on a tangent and explored ideas around a social walker; we imagined a series of walkers networked together so the elderly could meet up or navigate. Ultimately, we combined these two ideas, marrying the social aspect with the design noir to come up with the Old Sole.

The walker records the average amount of fluctuations in the FSR over an interval, as does the shoe with its own FSR. The walker sends POST requests to a server, which here is a datastream on data.sparkfun.com, with how many steps it has taken in the last time period. The shoes then read the step counts from the server via GET requests.

Putting the Shoes Together

Connecting the Shoes, Walker, and Server

Project in progress by 5 developers

How to "Multithread" an Arduino (Protothreading Tutorial)