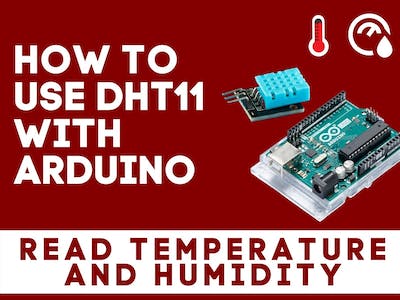 How to connect DHT11 Sensor with Arduino UNO 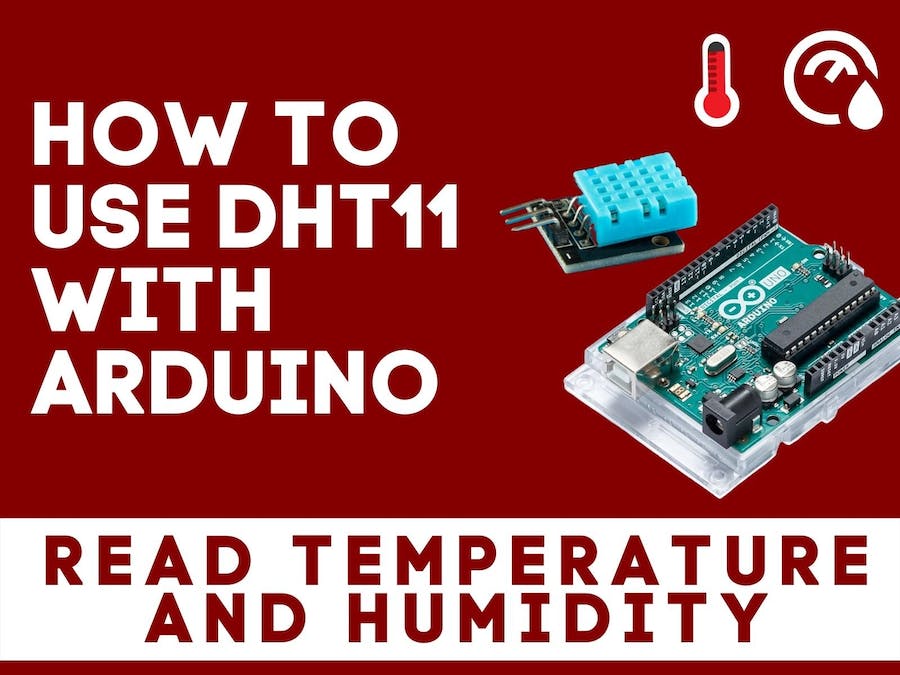 How to connect DHT11 Sensor with Arduino UNO

In this tutorial, I’ll first go into a little background about humidity, then I’ll explain how the DHT11 measures humidity. After that, I’ll show you how to connect the DHT11 to an Arduino and give you some example code so you can use the DHT11 in your own projects.

The DHT11 is a basic, ultra low-cost digital temperature and humidity sensor. It uses a capacitive humidity sensor and a thermistor to measure the surrounding air and spits out a digital signal on the data pin (no analog input pins needed). Its fairly simple to use, but requires careful timing to grab data. The only real downside of this sensor is you can only get new data from it once every 2 seconds, the sensor readings can be up to 2 seconds old.

Compared to the DHT22, this sensor is less precise, less accurate, and works in a smaller range of temperature/humidity, but it is smaller and less expensive.

What is Relative Humidity?

The formula to calculate relative humidity is:

The relative humidity is expressed as a percentage. At 100% RH, condensation occurs, and at 0% RH, the air is completely dry.

How the DHT11 Measures Humidity and Temperature

The DHT11 measures temperature with a surface mounted NTC temperature sensor (thermistor) built into the unit. To learn more about how thermistors work and how to use them on the Arduino, check out this Arduino Thermistor Temperature Sensor Tutorial.

With the plastic housing removed, you can see the electrodes applied to the substrate:

An IC mounted on the back of the unit converts the resistance measurement to relative humidity. It also stores the calibration coefficients, and controls the data signal transmission between the DHT11 and the Arduino:

The DHT11 uses just one signal wire to transmit data to the Arduino. Power comes from separate 5V and ground wires. A 10K Ohm pull-up resistor is needed between the signal line and 5V line to make sure the signal level stays high by default (see the datasheet for more info).

There are two different versions of the DHT11 you might come across. One type has four pins, and the other type has three pins and is mounted to a small PCB. The PCB mounted version is nice because it includes a surface mounted 10K Ohm pull up resistor for the signal line. Here are the pinouts for both versions:

How to Set Up the DHT11 on an Arduino

Wiring the DHT11 to the Arduino is really easy, but the connections are different depending on which type you have.

Simply ignore pin 3, it's not used. You will want to place a 10 K ohm resistor between VCC and the data pin, to act as a medium-strength pull up on the data line. The Arduino has built-in pull-ups you can turn on but they're very weak, about 20-50K

You should have the Arduino IDEsoftware running at this time. Next, it’s necessary to install the DHT Sensor library, which can be done through the Arduino Library Manager:

Enter “dht” in the search field and look through the list for the “DHT sensor library by Adafruit.” Click the “Install” button, or “Update” from an earlier version.

IMPORTANT: As of version 1.3.0 of the DHT library you will also need to install the Adafruit_Sensor library, which is also available in the Arduino Library Manager.

Now load up the Examples→DHT→DHTtester sketch.

First we have to include the "DHT.h" Library.

Then define the digital pin in which the DHT11 is connected to.

Now define the type of DHT Sensor. Since we're using a DHT11 sensor, we can write like this.

Then define the DHT parameter to Initialize DHT sensor.

Note that older versions of this library took an optional third parameter to tweak the timings for faster processors. This parameter is no longer needed as the current DHT reading algorithm adjusts itself to work on faster procs.

Inside the void setup function, Initialize the Serial Communication and the DHT Sensor.

Now, inside the void loop function, let's measure the readings.

Reading temperature or humidity takes about 250 milliseconds! Sensor readings may also be up to 2 seconds 'old' (its a very slow sensor).

Read temperature as Celsius (the default)

Check if any reads failed and exit early (to try again).

Print the measured readings on the Serial Monitor.

That's all. You can use this code to measure the temperature and humidity values using the DHT11 or DHT22 sensors in any of your projects.

Upload Program to the Arduino

Watch our youtube video to see how to upload the program to Arduino.

Pi BOTS MakerHub is an Opensource Hardware Community and Training Center. You can join our Community programs By joining our Community Groups. To join, Click HERE 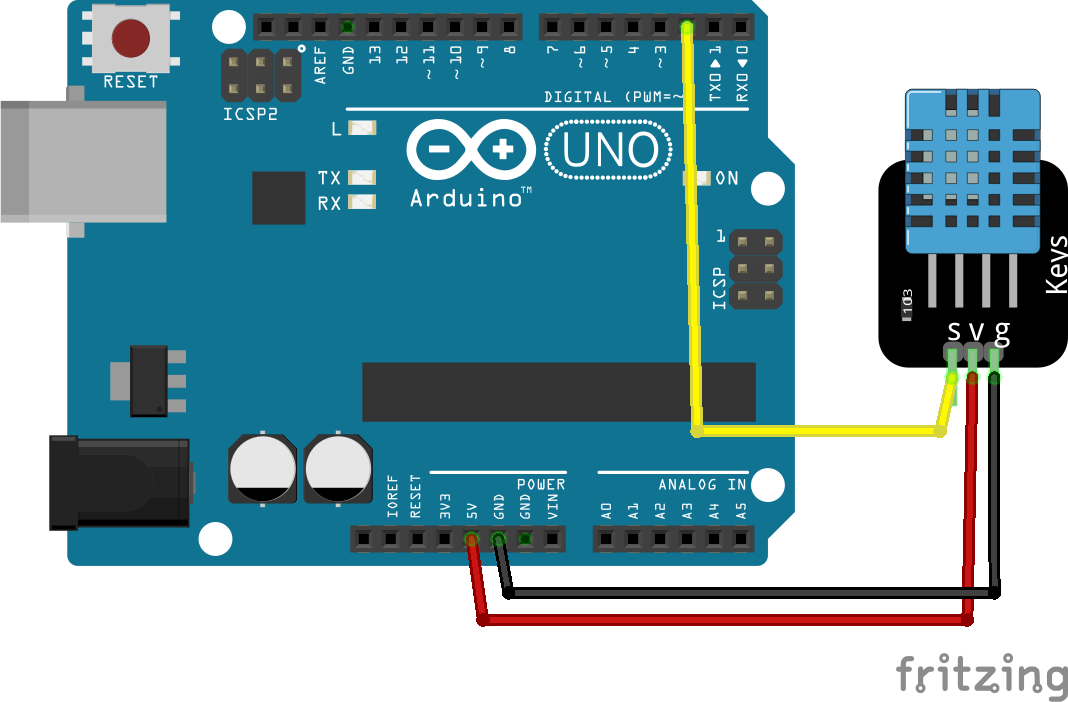 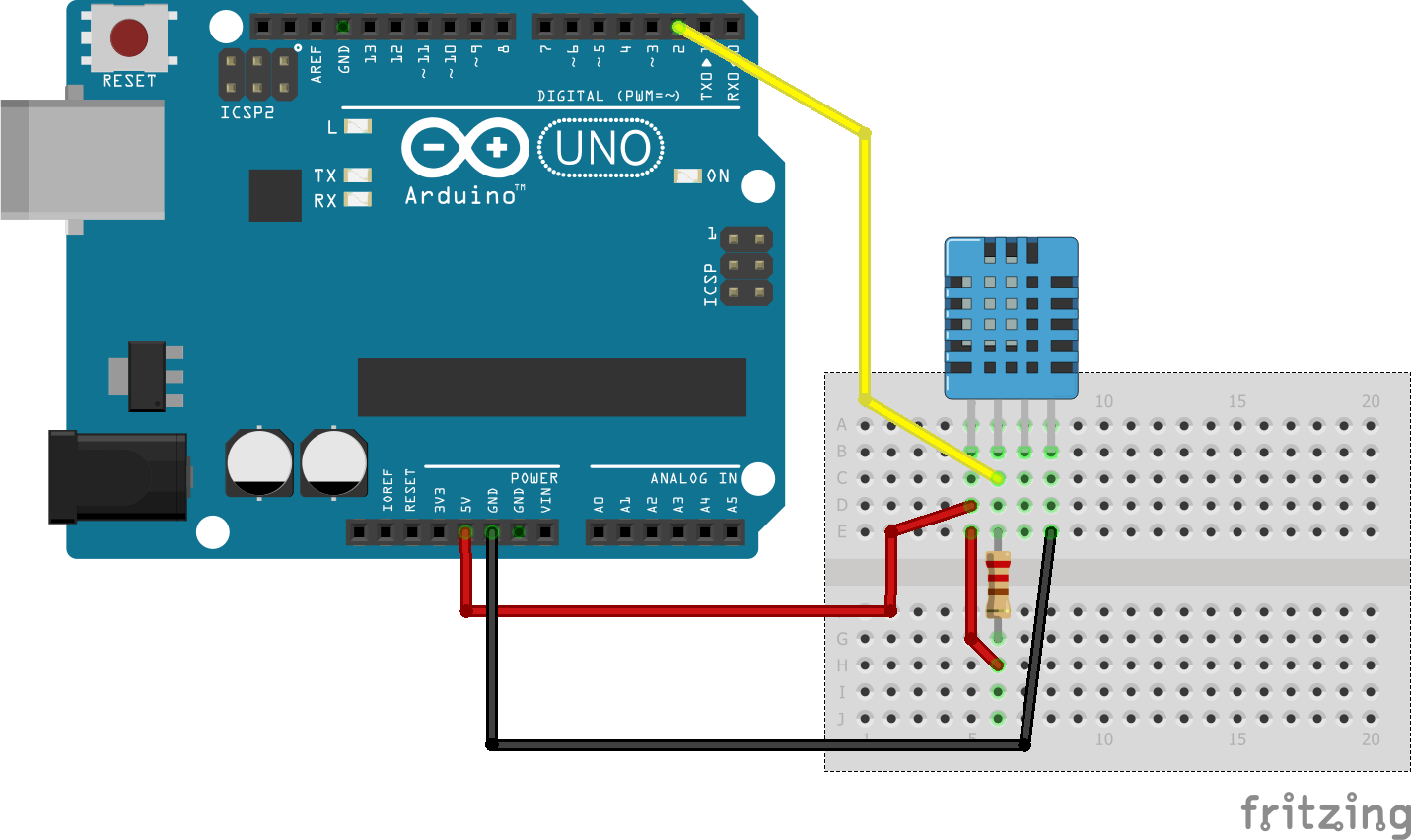 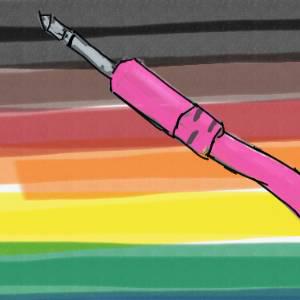 Take readings from the DHT11 Temperature/Humidity sensor and see them from the Arduino IDE Serial Monitor.

I've always wondered if there were any real differences between temperature and humidity sensors, especially DHT11 and DHT22.

Weather Sensors, Between DHT11 and DHT22

Arduino how to - using BME280 (temp, hum and press sensor) I2C breakout from itbrainpower.net and Arduino 3.3V or 5V shields.

Arduino BME280 Sensor How To

This tutorial will show you how to use DHT11 with Arduino.