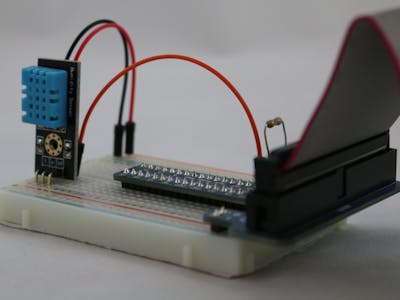 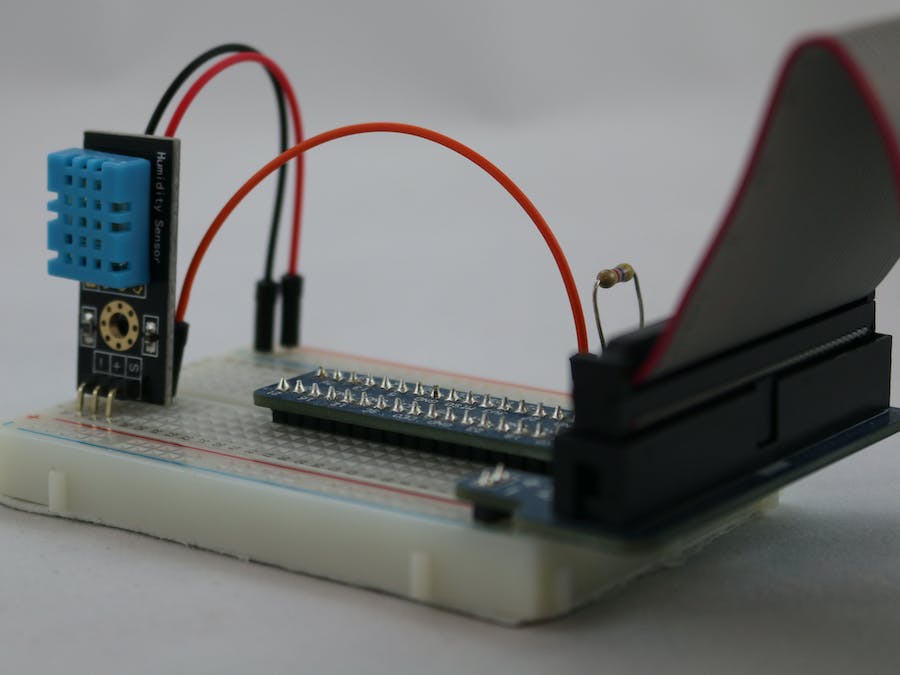 If you would like a different approach to connect your DHT11/22 to a Raspberry Pi using Windows 10 IoT Core, see my article "DHT Tiny Breakout for the Raspberry Pi".

The DHT11 is a 4-pin (one pin is unused) temperature and humidity sensor capable of measuring 20% - 90% relative humidity and 0 to 50 °C. The sensor can operate between 3 and 5.5V DC and communicates using its own proprietary OneWire protocol. This protocol requires very precise timing in order to get the data from the sensor. The LOW and HIGH bits are coded on the wire by the length of time the signal is HIGH. The total time to take a reading is at most 23.4 ms. This includes an 18 ms delay required to start the data transfer and a window of up to 5.4 ms for the data. Individual signals can be as short as 20 μs and as long as 80 μs.

I posted to the Microsoft forum and had a few exchanges with other developers having the same struggle. I eventually came across a Microsoft response on the OneWire protocol in Windows 10 IoT Core that read:

"Please keep in mind that the Windows 10 IoT Core OS is not a real-time OS in the same way that Windows CE was, so very low level timings and measurements might not always be possible. Also at the moment we don’t have a native implementation of Bitbanging / OneWire".

After a while I received a response to my post that read:

"I'm given to understand that a more accurate timing facility will be available in future releases".

Well, that will be a great and I am truly excited about the upcoming capability but who can wait? I recently saw that Microsoft posted a sample on how to support the a OneWire protocol using the DHT11 as the sample sensor and using C++ on Windows 10 IoT Core. I saw this as an opportunity to bring it to C#.

This project is about turning that sample into a library that can be used in C#. I am grateful for the person that wrote the library to help make this popular sensor useful in Windows 10 IoT Core, and hopefully, with this library it will be even more useful.

The library I created is a simple refactoring of the code originally posted by Microsoft so I take no credit for the work done to get the sensor reading.

The library presents a simple class called Dht11 in the namesapace Sensors.Dht. Creating a new object in C# is simple.

First open the GPIO pin you have the DHT11 sensor pin connected.

Then pass this pin to the constructor of the Dht11 class and specify the GPIO Pin Drive Mode. This allows you to decide whether you will add your own pull-up resistor.

To get a reading from the device use the GetReadingAsync method.

There is an overload that allows the maximum retry value to be specified. The default value is 20. This specifies how many attempts to make to read the sensor before giving up and returning a failed reading.

The DhtReading structure is defined as:

TimedOut (true if the attempting to take a reading timed out; false otherwise) IsValid (true if the reading checksum was correct; false otherwise) Temperature (the temperature reading in Celsius. The DHT11 only supports integer values) Humidity (the humidity reading in percent. The DHT11 only supports integer values)RetryCount (the number of attempts made to read the sensor)

Even though the sensor works in C++ it still does not get a reading every time. Thus, the need for a retry option in the class (this is actually part of the Microsoft sample). I thought it would be best to compare this to other platforms to see how it performs. I tried code on the Raspberry Pi 2 running Raspbian as well as on an Arduino Uno. The code I used for both has been included in the GitHub repository.

The video included in this project will demonstrate and compare the output from each of these platforms.

Assemble the Circuit for the Raspberry Pi 2

Assemble the Circuit for the Arduino

Below are photos of the circuits I built.

Starting the Application for the Raspberry Pi

Choose Debug, ARM configuration and Remote Machine. Now right-click the project, and select Property and then click Debug tag. Next put the Raspberry Pi 2 IP address in the Remote machine field, and uncheck Use authentication.

Press F5. The application will deploy to the device which may take a few minutes the first time.

Starting the Application for the Arduino

The sketch for this project is available in GitHub in a file called Dht11_Speed. Start the Arduino IDE and open the sketch. Upload the sketch to the Arduino (Ctrl U ) and then start the Serial Monitor (Ctrl Shift M )

Starting the Application for Raspbian

The C code for the Raspberry Pi is available in GitHub for this project in a file called Dht11.c. The source needs to be copied to the Raspberry Pi and then compiled there. I like to use WinSCP to copy files. If you do not have this application I recommend you download and install it now. The source code uses wiringPi which must be installed prior to compiling the application.

The command to compile the code on the Raspberry Pi is:

To run the application enter the command:

The video will demonstrate in more detail how to copy the code and how to compile it on the Raspberry Pi running Raspbian. To learn how to load Raspbian on your Raspberry Pi go to https://www.raspberrypi.org/downloads/raspbian/.

The video below is a demonstration the application:

View this video in You Tube using Theater mode for best quality. 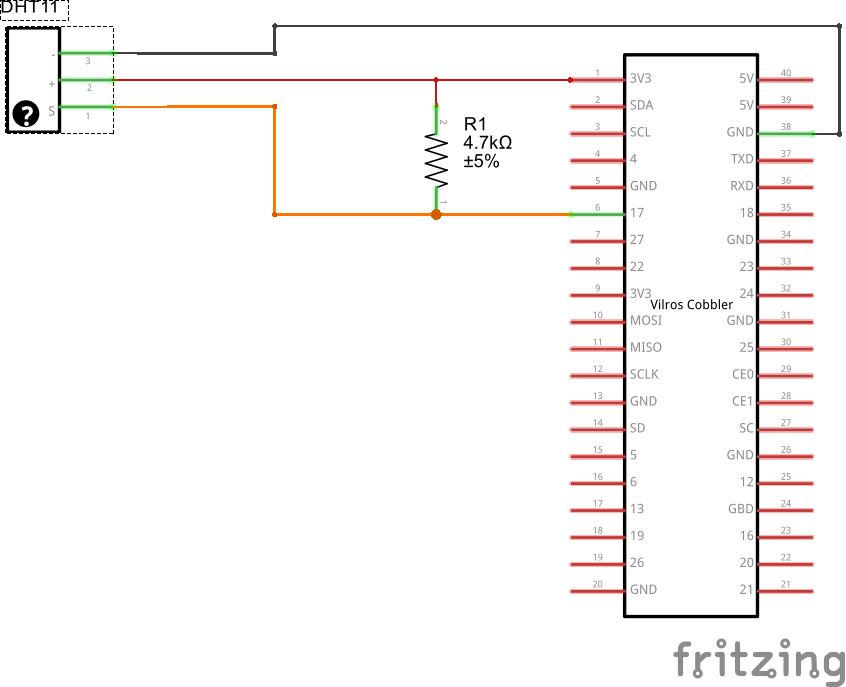 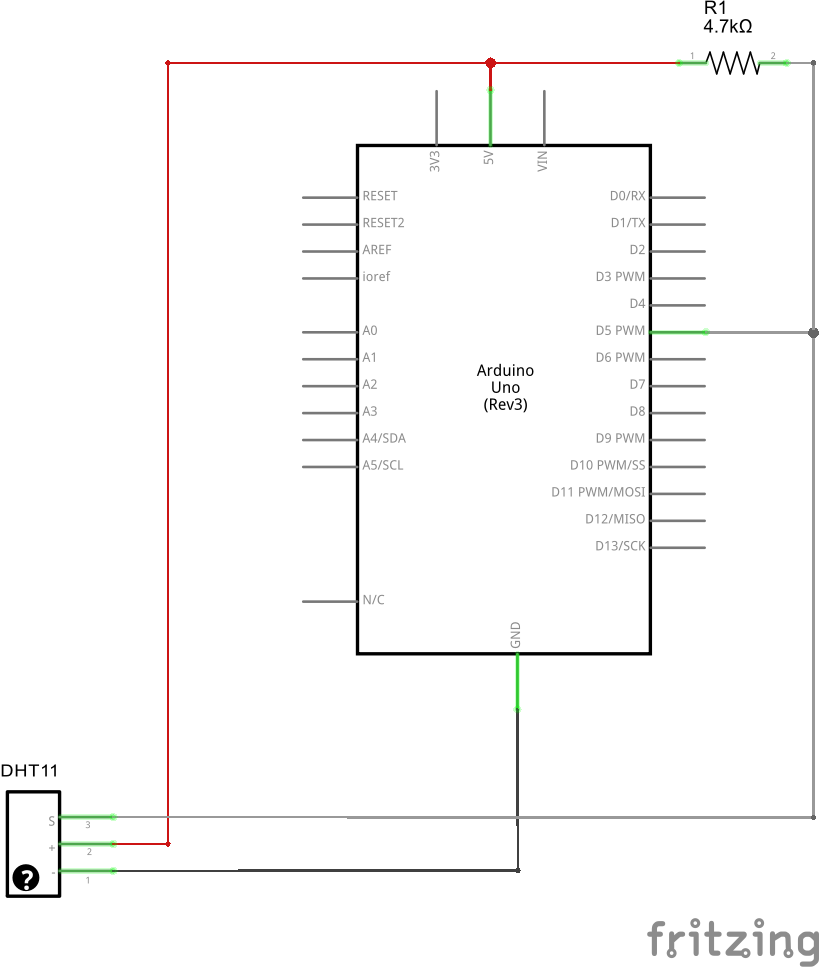